First Day Teaching – Norway House, Manitoba – Anyone Up for a Hospital Visit?

As a teacher for over 8 years, my journey was filled with countless emotions, often at the same time. The first day of the school year can set the tone for the entire year. It can be a stressful day, but when you add a first day curse things can get out of hand. I’ve experienced the craziest first days during my career. They are powerful enough to make you question entering the teaching profession altogether. Follow me on my first days of disaster and teaching in Norway House, Manitoba.

Norway House, Manitoba – Anyone Up for a Hospital Visit?

I arrived in Norway House just early enough to catch the local flu bug that was going around. It was the the first day of school so I wasn’t exactly going to call in sick. The thought of a first day curse crossed my mind after my experience in Shefferville, Quebec but I quickly diminished it and went about planning my day. Norway House was going to be different.

My first strategy was to eat as little as possible before heading to work. I had been throwing up everything that went into my stomach. I wasn’t prepared to vomit on one of my students. My second goal was to dress in warm clothing since I suffered from chills for two days. Finally, I was going to arrive early to settle in to my classroom and prepare for the day. I wanted to create as little interruption as possible so I made this plan of action, but it turned out to be a long list of disastrous choices. 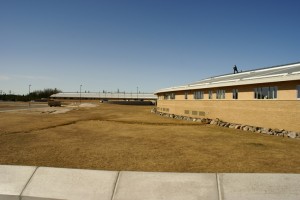 I arrived at the school 40 minutes before my first class and the introductory presentation in the gymnasium.

Walking into my classroom was like stepping into a sauna. It was hot! The heat was cranked and bellowing out of the vents like the stacks of a steam ship. Dressing in layers was a great idea but the layers themselves were ill prepared. I had a blazer on over a long sleeve dress shirt, but no option for the heat that hit me like a ton of bricks. I took off the blazer, took several deep breaths, and searched for the thermostat.

Why is it that I can’t seem to figure out how to work these nasty things?

I fiddled with the dial but it didn’t make any difference; the heat was on a mission to take me down and it was succeeding at a frantic pace.

I opened the window and sat next to it until the bell rang for class. 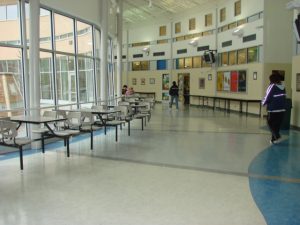 we headed toward the hall and down the ramp to enter the welcoming presentation. Just leaving the blazer off was not going to cut it. I needed some other form of cooling off and feeling better.

As we entered the gym, I remembered that there was a soda machine by the offices. I waited until my students were seated and returned to the hallway to get a soda.

I’m not sure if any of you have passed out before, but there is this feeling that comes over you. Your body feels tingly and your vision, along with your hearing, starts to blur. It’s a quick process and sometimes you can sit down or rest on something to make it pass; this was not one of those times.

I walked up the wheelchair ramp and felt the familiar sensation of “I’m going to pass out.” To avoid the episode, I reached for the railing in an attempt to rest until it passed.

I woke up on the floor, confused and disorientated. Standing over me, like an angel, was a mass of blonde hair and blue eyes.

I wiped my eyes and thought, “Oh, thank God. This is just a dream,” but I wasn’t so lucky.

The principal, Mrs. Mowatt, said, “Lesley. Are you ok? You passed out and your on the floor. I grabbed you a chair. Can you get up and into it?”

I sat on the chair and she strongly suggested that I go to the hospital to check things out. She said that another teacher, I will not use his real name and you’ll eventually understand why, lets call him Mark, could take me to the hospital since he didn’t have any students next period. If things took longer than that, she would look after everything.

In a state of embarrassment and pride, I said that I was fine and I’d like to continue with the rest of the day. What I was really thinking was that I has already met Mark and he was a creeper who was only interested in getting into women’s pants. There was no way that I was going to the hospital with him.

That’s when she showed me a mirror and my pride and embarrassment, and worries about riding with Mark, turned to fear. I must have smashed my head on the railing and I was bleeding excessively around my brow line. I was unconsciously wiping the blood out of my eye in a state of shock. The bruising was already starting to develop. I really did need to go to the hospital. All other concerns would have to be placed on the back burner.

We arrived at the Norway House hospital and I was a last priority for them even though I was bleeding from the head and had a nasty gash on my leg as well as some serious swelling from the fall. After waiting for over four hours, having little conversation with creepy Mark , and starving for food since I hadn’t eaten all day, they finally sent me in to see the doctor.

He bandaged my head and told me I had a slight concussion; I wouldn’t be returning to work anytime soon. He suggested that I have an x-ray on my knee because I could have chipped or broken something. The swelling was engulfing my knee and it appeared serious. At that point, I was willing to do what ever I was told and sent me into another room to put on a gown for the x-ray.

It was extremely difficult to get my clothes off and put on the gown. Unbuttoning my shirt, I started to cry. The growing pain was a realization about what had just happened. I pulled at my bra straps and agonizingly slide my pants over my now excessively swollen knee. I must have been taking a long time and the doctor was worried that I had passed out again. Thinking that Mark was my husband, he asked him to check on me. I was standing in my underwear, leaning over the table in pain with tears streaming down my face when he walked into the room.

I heard the door open, turned around, and stood there in shock for what seemed like hours before screaming and attempting to cover myself with my hands. At this point you’ll probably ask, “Why didn’t you grab the gown?” or “What didn’t he immediately get out?” But they are questions I can’t answer. All I know is that I was still in a state of shock and confusion and pain and my scream only attracted more attention. I stood there with my hands over my breasts, tears over my face, and only thong underwear over my most private area as the doctor and a male nurse, along with Mark – lets not forget creepy Mark,  stood in or entered the room. This whole event might have taken 10 seconds but it’s a lifetime when you’re on my end of things.

Finally, they left the room and allowed me to put on the gown, but what did I have to hide at that point? Thankfully, after the x-ray, everything appeared fine with my leg minus a few simple stitches.  I only had a slight concussion and the doctor gave me a note to take the rest of the week off of work, which I had no intention of doing.

When I finally did return to work, a week later, I realized the students had no idea what had happened. The substitute teacher only told them that I has a small accident and I would be returning to school in a week.

My black eye was an impossible hide and most students assumed that someone had hit me. Feeling sorry for me, they gave me a little bit of special attention. It was only two weeks later that I learned what they had assumed happened to me.

Although I know I truly earned their respect outside of the situation, it certainly didn’t hurt that my first official day teaching in Norway House was with a black eye and after being out for a week because of “an accident”.

Have you heard of Norway House, Manitoba before? Although it’s not my first bucket list destination choice, it’s beautiful. If you’ve been, I’d love to read your stories. Please share a link below.

Many people working in diverse industries usually partake in business travel since it’s essential for them to interact with colleagues,...
END_OF_DOCUMENT_TOKEN_TO_BE_REPLACED

Weekend getaways should be the easiest of all to pack for, right? After all, you know where you're going, what you'll be doing, and wha...
END_OF_DOCUMENT_TOKEN_TO_BE_REPLACED

Our San Antonio bucket list was super easy to create. There are so many unique bucket list experiences that we keep going back for more...
END_OF_DOCUMENT_TOKEN_TO_BE_REPLACED

On a recent Royal Caribbean cruise, I encountered countless parallels between game development and travel activities and professions. F...
END_OF_DOCUMENT_TOKEN_TO_BE_REPLACED

Recently, Saudi Arabia restored direct flights to Thailand after 32 years. Do you know the history behind the cold relationship between...
END_OF_DOCUMENT_TOKEN_TO_BE_REPLACED

The Palm Beaches are perfect for family travel. Whether you're interested in the beach as a natural playground or exploring the more wi...
END_OF_DOCUMENT_TOKEN_TO_BE_REPLACED

Flower tourism comes alive during the spring and summer. With so many different kinds of wild flora, it’s difficult to decide where bes...
END_OF_DOCUMENT_TOKEN_TO_BE_REPLACED

It’s easier than ever to take amazing photos of your travels so you always have those memories. Your phone is a high-quality camera, so...
END_OF_DOCUMENT_TOKEN_TO_BE_REPLACED

Last year, Athena spent her birthday at home with us. We couldn't have friends over to celebrate and we could only get her things that ...
END_OF_DOCUMENT_TOKEN_TO_BE_REPLACED

What cities are on your travel bucket list for 2021? When we think of travel, we think of climbing hills to watch the sunrise, cocktail...
END_OF_DOCUMENT_TOKEN_TO_BE_REPLACED

Grandscape will be one of the largest and most unique mixed-use real estate developments in the country upon completion. Located in the...
END_OF_DOCUMENT_TOKEN_TO_BE_REPLACED

A digital nomad travels the world and works remotely. With the assistance of technology, nomads use the advancements and opportunities ...
END_OF_DOCUMENT_TOKEN_TO_BE_REPLACED

31 thoughts on “First Day Teaching – Norway House, Manitoba – Anyone Up for a Hospital Visit?”