I’ve experienced some of the most amazing cities that the world has to offer. From world-famous attractions, architecture, history, and culture, there are many different factors that make a city great, let alone top ten! Rome, Italy, one of the oldest cities in the world, there is no other place that holds the beginning of life like Rome, is number one on our list.

The city standing on Seven Hills by the Tiber River is a discovery of monuments among some of the most beautiful architectures and creations in the world. From the Colosseum, the Roman Forum, Trevi Fountain, Vatican City, Sistine Chapel, and Saint Peter’s Basilica, every street houses an imperial Roman ruin.

The people of Rome, including ancient gladiators, powerful emperors, and influential religious leaders, have shaped world history for 2,000 years and counting.

When I walked the streets of Rome, I was filled with anticipation and wanderlust. After a decade studying ancient history in high school and university, I was immersed within its walls and ready to explore its vast, lively lands.

Known as La Cita Eternal, everything done in Rome is accomplished in an endless, epic manner. Being able to “live” history by going where historical figures went, feeling what they felt, and seeing what they saw was a remarkable experience provided by the Colosseum. It was an indescribable feeling to step inside the Colosseum and know that people, both influential and common, stood in that exact spot for thousands of years before me.

Our friend, Kevin Mercier at Kevmrc Travel, includes the Colosseum on the top of his 50 Famous Landmarks in Italy You Must Visit Once in Lifetime.

The Colosseum is located near the ancient center of Rome and it’s still a marvel to behold. It is amazingly well preserved; built between 70AD and 80AD, the Roman Colosseum held up to 70,000 spectators for gladiator contests and animal hunts.

It’s estimated that over 500,000 people and 1,000,000 animals were killed during the Roman games. I will never forget my visit to the Colosseum and my overwhelming desire to touch everything and blink less as I took in its history! 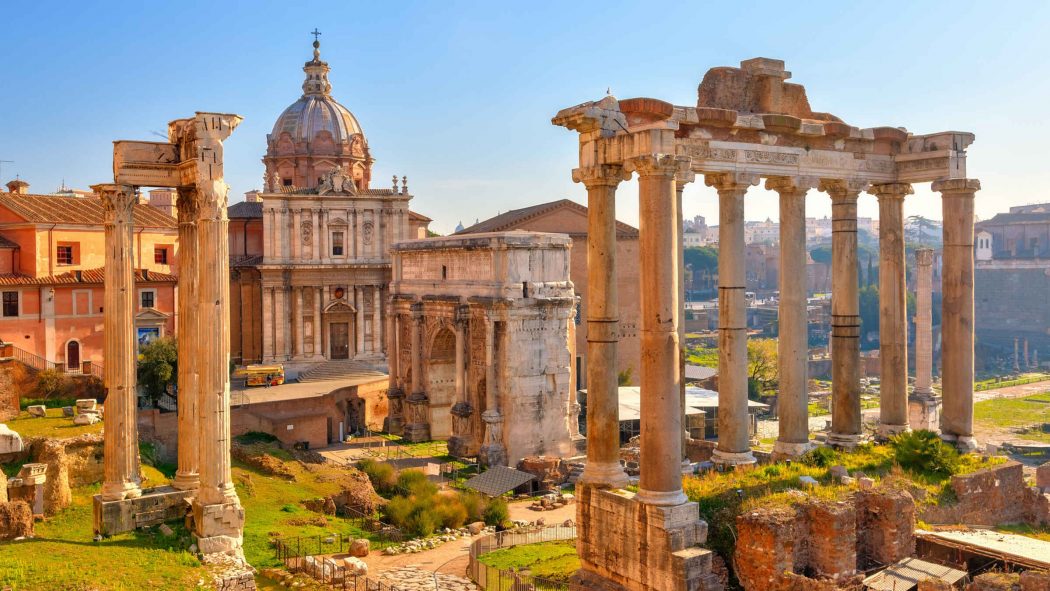 If stones could talk, the hallowed ruins of the Roman Forum, Imperial Forums, and Palantine Hill would speak of the most powerful government in the world. Although these lands and buildings no longer exist in their original grandeur, the ruins still hold important clues about Rome’s ancient rulers and elite. I didn’t see ruins and fragments, broken arches and overturned boulders.

My continued studies and vivid imagination allowed me to wander amidst Circus Maximus, the Temple of Vespasian and Titus, Palaces of Tiberius and Caligula, and the Basilica of Constantine and Maxentiu. The rush of history and the “sacred way” hit me like a horse-drawn chariot; I was among gods! 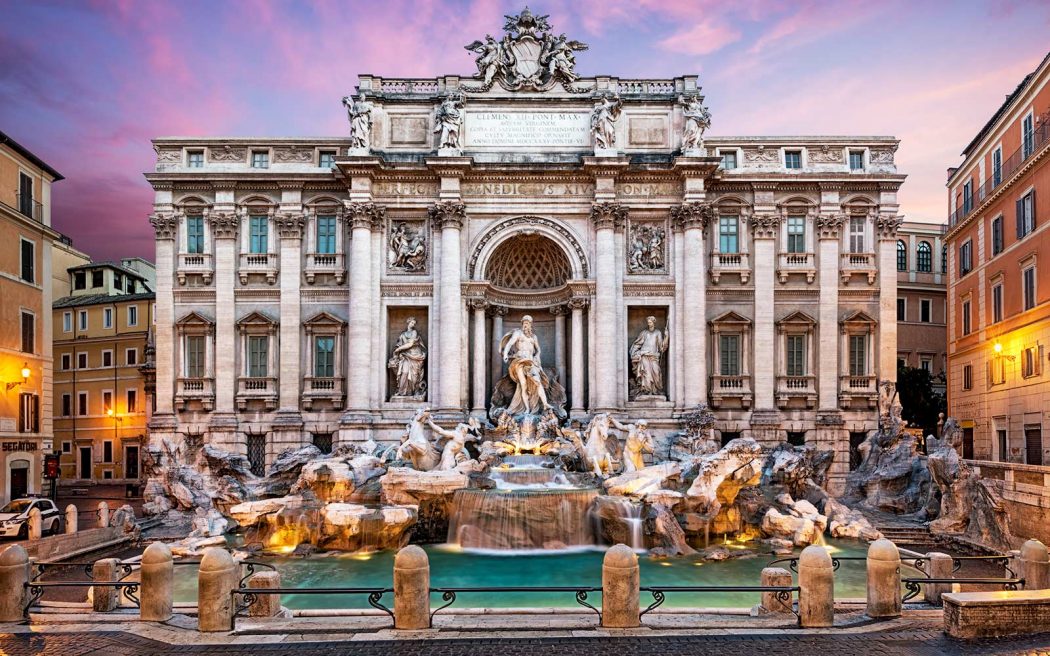 Trevi Fountain is a commonly visited tourist spot, and I heard that if visitors throw a coin into the fountain, they are ensured to return back to Rome. I’m not one to follow legends too closely, but if there is any opportunity to increase my odds of returning to Rome, I’ll believe in superstition.

You can’t turn a street corner in Rome without seeing a beautiful fountain, but Trevi Fountain is not to be missed. 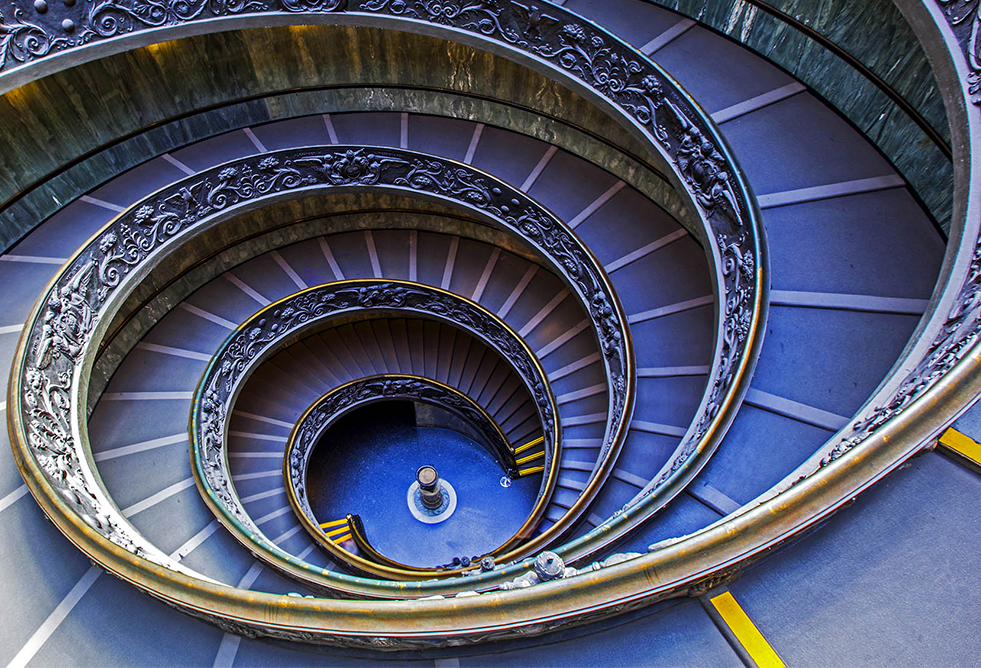 The Vatican Museums are vast and contain many treasures collected over thousands of years. They are located in the papal palace and the most famous room inside the museum is the Sistine Chapel.

My ancient history studies may span over a decade, but I couldn’t imagine touring the museums or the chapel without a guide.

When standing inside the chapel, we were packed in like sardines but it was worth it to see, first-hand, the many treasures and famed pieces of art. The Last Judgement, a painting by Michelangelo that took six years to complete, is located above the altar in the Sistine Chapel. It is a depiction of the second coming of Christ and the apocalypse. The souls of humanity rise and descend to their fates as judged by Christ and his saintly entourage.

Standing before Michelangelo’s massive masterpiece, I understood why he prevailed as a painter. Then, if his greatness wasn’t obvious already, the ceiling of the Sistine Chapel contains Michelangelo’s most famous fresco painting and the  “Creation of Man” panel. Little description is needed for this work of art because it is popular around the world.

Perhaps there is no greater living testament to Rome’s history, than St. Peter’s Basilica. Over 2,000 years of Roman and Christian history are represented and found in St. Peter’s.

In addition to its history, St. Peter’s is also the largest and most famous church in all of Christianity. It is the home of the papal seat and the center of the Catholic Church.

St. Peter’s also rivals the greatest art museums in the world. I visited St. Peter’s and took in the wonder of St. Peter’s Square during a Vatican holiday and I was able to see the Pope, bishops, archbishops, and cardinals perform a service and walk the square before my very own eyes. Now, each time I see St. Peter’s on TV, I can’t help thinking I was there!

As a teacher, I reveled in its offerings and as a life-long history student I kept my eyes wide open and the pictures aplenty to never forget what I learned in Rome. 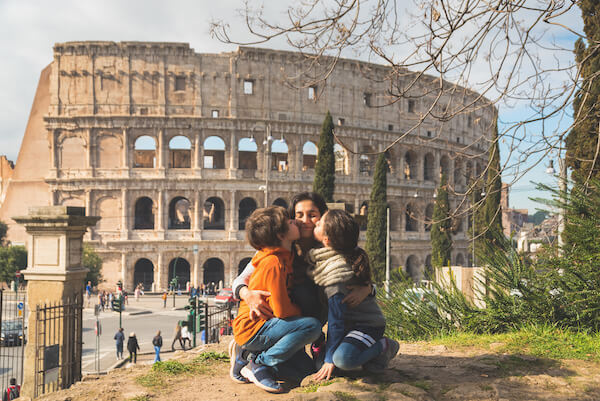 While Rome is one of my favorite cities in the world, I have yet to return with my kids. Our friends over at Mama Loves Rome have a complete travel guide to Rome for families with child-friendly attractions in Rome, best family accommodation and practical travel tips – by a Rome mama! Maybe my opinion of Rome will completely change when I visit with my children or maybe my love from Rome will only be enhanced by seeing it anew through the eyes of my kids.

Weekend getaways should be the easiest of all to pack for, right? After all, you know where you're going, what you'll be doing, and wha...
END_OF_DOCUMENT_TOKEN_TO_BE_REPLACED

Our San Antonio bucket list was super easy to create. There are so many unique bucket list experiences that we keep going back for more...
END_OF_DOCUMENT_TOKEN_TO_BE_REPLACED

On a recent Royal Caribbean cruise, I encountered countless parallels between game development and travel activities and professions. F...
END_OF_DOCUMENT_TOKEN_TO_BE_REPLACED

Recently, Saudi Arabia restored direct flights to Thailand after 32 years. Do you know the history behind the cold relationship between...
END_OF_DOCUMENT_TOKEN_TO_BE_REPLACED

The Palm Beaches are perfect for family travel. Whether you're interested in the beach as a natural playground or exploring the more wi...
END_OF_DOCUMENT_TOKEN_TO_BE_REPLACED

Flower tourism comes alive during the spring and summer. With so many different kinds of wild flora, it’s difficult to decide where bes...
END_OF_DOCUMENT_TOKEN_TO_BE_REPLACED

It’s easier than ever to take amazing photos of your travels so you always have those memories. Your phone is a high-quality camera, so...
END_OF_DOCUMENT_TOKEN_TO_BE_REPLACED

Last year, Athena spent her birthday at home with us. We couldn't have friends over to celebrate and we could only get her things that ...
END_OF_DOCUMENT_TOKEN_TO_BE_REPLACED

What cities are on your travel bucket list for 2021? When we think of travel, we think of climbing hills to watch the sunrise, cocktail...
END_OF_DOCUMENT_TOKEN_TO_BE_REPLACED

Grandscape will be one of the largest and most unique mixed-use real estate developments in the country upon completion. Located in the...
END_OF_DOCUMENT_TOKEN_TO_BE_REPLACED

A digital nomad travels the world and works remotely. With the assistance of technology, nomads use the advancements and opportunities ...
END_OF_DOCUMENT_TOKEN_TO_BE_REPLACED