Today was the day we were going volcano boarding (more accurately, volcano tobogganing) in Cerro Negro. This Cerro Negro event sold me on 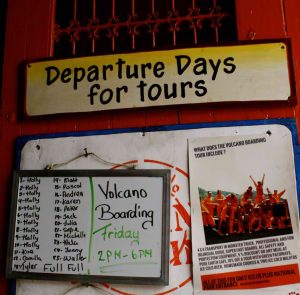 Holly Beck’s retreat and I was so ready to go. How often do you get to hike up and then board down the world’s most active cinder-cone volcano? My point exactly.

We had taken off around noon that day to drive out to Leon. Holly had business to take care of in Chinandega so she would not be joining us. As we left El Coco Loco, she would wave goodbye and shout to us, “Remember, slow and steady wins the race!” Holly had changed her tune since she wiped out on the side Cerro Negro on her last trip and busted her ankle. I wasn’t planning on breaking any speed records that day, especially riding down a 45-degree slope, but I was stoked nonetheless.

It was about an hour and a half drive into the city of Leon and we slept most of the way. We were all pretty tired from our adventures thus far and took full advantage of any down time, even if this meant using each other’s shoulders and knapsacks as pillows.

When we got to the city we were dropped off in front of the Bigfoot Hostel, the group that ran the tours to the volcano.

After we checked in, we had about an hour and a half until the tour would depart. Helina bought us all smoothies and we relaxed by the bar, taking in the traffic and buzz of the tiny Leon streets. 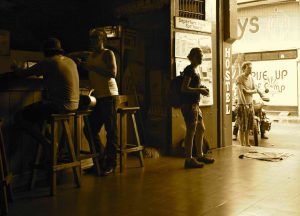 I grilled Helina about her previous experiences on the mountain as we walked to the internet café a few doors down. She patiently answered and re-answered my questions. As we walked back I heard a giant clap of thunder. I turned to her and asked, “Would rain be a bad thing?” Helina nodded, explaining that the tour would not proceed if it rained too much; it would make it too hard for us to slide down. I hoped that the clouds would just pass over us, leaving us nothing to worry about.

Then, of course, the torrential downpour began.

“Helina, exactly how much rain would be necessary to cancel our tour?”

I don’t think she appreciated all of my questions, but I was perplexed. I couldn’t have come this far to have to footnote this experience on my bucket list as ‘almost attempted.’ 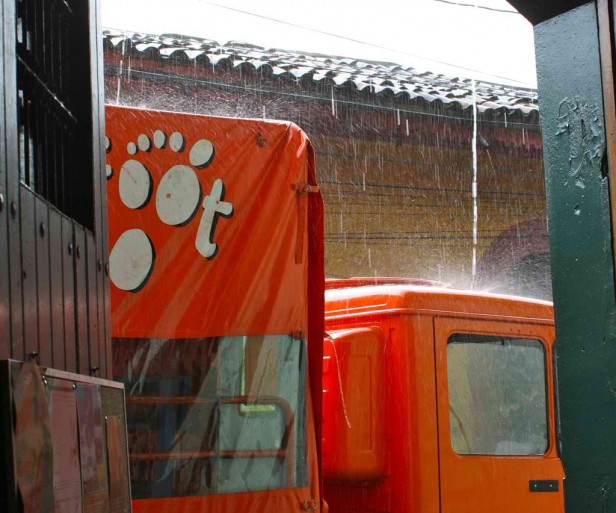 Helina was texting Holly back and forth about our predicament as the other girls sat listlessly watching the rain. I tried to will the rain away, determined not to let the clouds dictate this experience for me. I had to slide down that stupid mountain if it was the last thing I did (turns out I should be careful what I wish for).

And as if being heard by the gods, ten minutes before the tour was scheduled to depart, the rain finally stopped. I did a mental happy dance hoping it hadn’t rained enough to cancel the tour.

We met our tour guide, a plastic and overly excited Australian girl whose name escapes me. We’ll just call her Babs because she could have been a cartoon character and was fond of pet names. She’d refer to us all as, ‘lovelies’ for the rest of the trip. What started off as endearing would six hours later make me wish I could push her off the volcano. But that’s neither here nor there, considering the rest of the day we would have.

The Indiana Jone’s ride at Disneyland has nothing on this Bigfoot dune buggy experience. The truck bounced and bobbled and flung us onto each other. The branches from the overgrown trees would slap against the side of the tarp, flinging cold water into the van. It was the ultimate roller-coaster-water-ride combo. We all squealed and braced ourselves the best we could, and took pictures when we weren’t afraid of getting thrown from our seats.

We would stop halfway up the side of the volcano, resting from our bumpy ride and breaking for beers. We could see our volcanic nemesis looming close by. 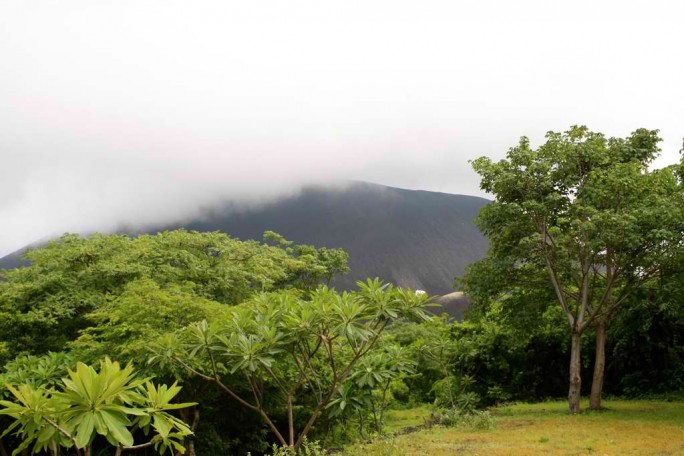 As we climbed back in our sardine-can-van, it started to rain again. At first it just seemed like a light teaser rain, but then we could hear the consistent pounding on the roof of the van. We looked nervously at each other. 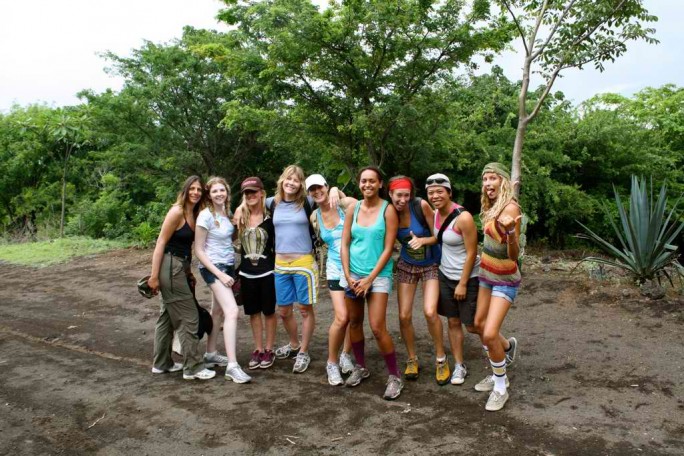 By the time we got to our drop off point at the bottom of Cerro Negro, the rain was hurricane status (you know, for a Vegas girl). They ordered everyone out of the van. The moment we stepped out we were soaked to the core. The worst part was that it was a cold rain, and Talei was the only one smart enough to have brought a raincoat (It was supposed to be in the high 80’s today… Go figure). We could hear the thunder and see lightning flashing around us. Andrea, Kristi, Emily, and Joice (the smart ‘over 30 year olds’) hopped back in the truck, opting to sit this adventure out.

Luckily for the rest of us, Andrea managed to catch our ‘under 30’ expressions of excitement and adventure…

… And you know, the misery and fear.

The tour guides started handing out our packs and boards. I flipped my board over, only to find it was lined with metal on the bottom. I looked at Babs and asked her, “Is this safe?”

Babs looked at our group, hesitated, and then shrugged her shoulders. “Well, we’re here. Let’s go!” I didn’t really find this to be an acceptable answer so I turned to Helina.

“We’re going,” she said matter-of-factly as Jennifer and I exchanged wary glances. I pointed to the bottom of my board and then looked up at the sky. “No buts, we’re going. We’ll be fine.” She turned and started hiking up the trail. 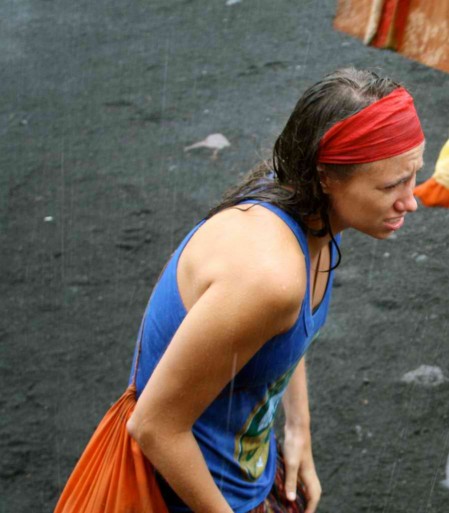 I hesitantly followed her, with Talei, Jennifer and Suzanne right behind. I heard Talei laugh and say to me, “Hilary, you really chose the wrong day to wear white.

I laughed as I tried to keep from slipping on a rock and shouted over my shoulder, “Whatever, ladies. Enjoy the view, because it’s a wet t-shirt contest and I’m totally winning.” They laughed.

Jennifer shouted from behind me, “Too bad it’s raining or else we could capture this moment.”

I shouted back, “Something tells me we’re not going to need cameras to remember this.” 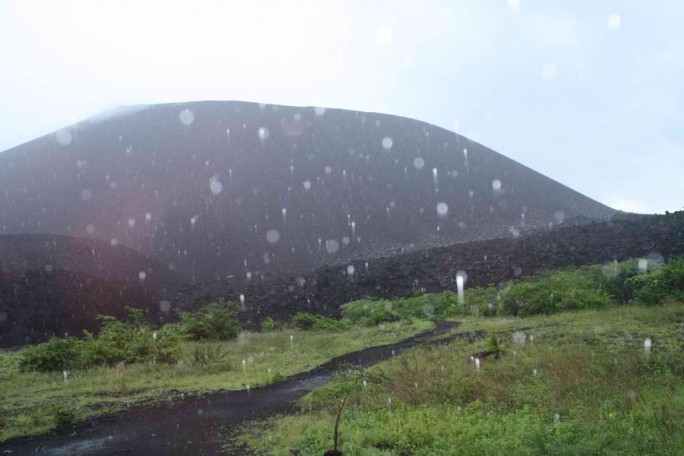 And while I was positive this would be true, I wasn’t sure exactly how long I would have to remember this crazy trek. These boards and packs were heavy and the trail was slippery. If I didn’t get stuck in a rock slide, slip and fall off the mountain or get hit by lightning, I was still hiking up one of the most active volcanoes in the world that was overdue for an eruption… Maybe the girls who stayed behind had the right idea?

Was I making a mistake by doing this? Would this be the last thing crossed off on my bucket list? Follow along with part two of my Cerro Negro trip to find out more.

Many people working in diverse industries usually partake in business travel since it’s essential for them to interact with colleagues,...
END_OF_DOCUMENT_TOKEN_TO_BE_REPLACED

Weekend getaways should be the easiest of all to pack for, right? After all, you know where you're going, what you'll be doing, and wha...
END_OF_DOCUMENT_TOKEN_TO_BE_REPLACED

Our San Antonio bucket list was super easy to create. There are so many unique bucket list experiences that we keep going back for more...
END_OF_DOCUMENT_TOKEN_TO_BE_REPLACED

On a recent Royal Caribbean cruise, I encountered countless parallels between game development and travel activities and professions. F...
END_OF_DOCUMENT_TOKEN_TO_BE_REPLACED

Recently, Saudi Arabia restored direct flights to Thailand after 32 years. Do you know the history behind the cold relationship between...
END_OF_DOCUMENT_TOKEN_TO_BE_REPLACED

The Palm Beaches are perfect for family travel. Whether you're interested in the beach as a natural playground or exploring the more wi...
END_OF_DOCUMENT_TOKEN_TO_BE_REPLACED

Flower tourism comes alive during the spring and summer. With so many different kinds of wild flora, it’s difficult to decide where bes...
END_OF_DOCUMENT_TOKEN_TO_BE_REPLACED

It’s easier than ever to take amazing photos of your travels so you always have those memories. Your phone is a high-quality camera, so...
END_OF_DOCUMENT_TOKEN_TO_BE_REPLACED

Last year, Athena spent her birthday at home with us. We couldn't have friends over to celebrate and we could only get her things that ...
END_OF_DOCUMENT_TOKEN_TO_BE_REPLACED

What cities are on your travel bucket list for 2021? When we think of travel, we think of climbing hills to watch the sunrise, cocktail...
END_OF_DOCUMENT_TOKEN_TO_BE_REPLACED

Grandscape will be one of the largest and most unique mixed-use real estate developments in the country upon completion. Located in the...
END_OF_DOCUMENT_TOKEN_TO_BE_REPLACED

A digital nomad travels the world and works remotely. With the assistance of technology, nomads use the advancements and opportunities ...
END_OF_DOCUMENT_TOKEN_TO_BE_REPLACED