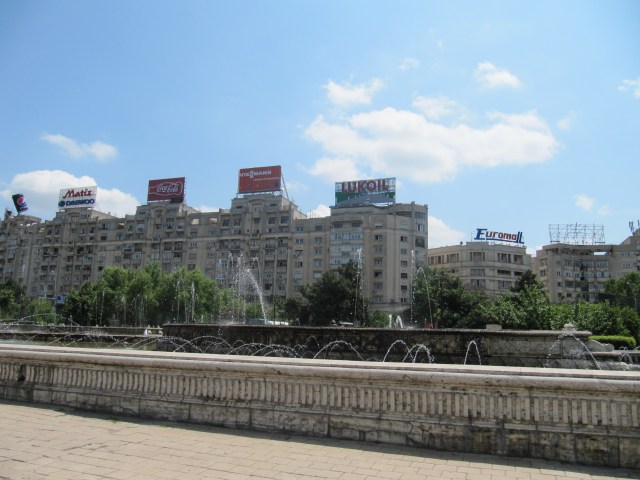 Bucharest is the most lush, sweet, and pleasing-to-the-eye city I’ve visited. The best part is that nobody “knows” about it. You don’t hear many people talking about their planned trip to Bucharest or other parts of Romania. The lack of hordes of tourists is what makes this city even more fun to visit. There is no standing in line for two hours to visit the Eiffel Tower, the London Eye, or to catch a glimpse of the astronomical clock tower in Prague.

The Beauty of Bucharest

Bucharest is such a huge city with many wide boulevards and parks. All the major streets are decorated numerous beds of colorful flowers. There are flower shops at nearly every corner. It adds to the beauty and the great smell of the city.

Go ahead a splurge on a cab while you’re there. There are over 10,000 in a city of 2 million people. It’s easy to find 3-4 cabs waiting along a main street. For a short trip of about 15 minutes, it costs roughly 2.50 Euros! A ride is much more enjoyable in a cab. You can roll down the window and stick your head out like a puppy dog drooling over the architecture.

Landmarks and Architecture in Bucharest

One of the most beautiful pieces of architecture is the Athenaeum. It’s the city’s main concert hall, which opened in 1888. The front façade features the faces of Romania’s five kings. Another major landmark is the Casa Poporului (Palace of the Parliament). It is impressive! It’s the world’s largest and most expensive civilian administrative building. Its construction involved demolishing much of Bucharest’s historic district including multiple churches and approximately 30,000 residences. This building is one of the main reasons Bucharest has so many stray dogs roaming the streets. The architecture is also fascinating with its white buildings and the characteristic arch motifs. There are some buildings that even look Parisian. In the period between the two world wars, Bucharest was known as the “Little Paris of the East”. I have to say that it isn’t so little and to me it has even more character than Paris. Its Europe’s best kept secret.

In addition to the neo-classical architecture, Bucharest also has a mix of communist style apartment buildings and some shiny modern buildings. They add to its unique character. After touring the city, head to the old city center. You can order a Romanian beer in a 0.5L bottle or cool down with a frappe. The patios in Bucharest are unlike any others I’ve seen in Europe. They are completely different from the French-style patios, which have tiny tables and tiny chairs on the uneven cobblestones next to the street. Bucharest has luxurious patios with large chairs covered with white cushions and tables big enough for four people to eat comfortably. You will find many restaurants with wooden patios filled with flowerpots and other vegetation. Many of the restaurants themselves are gigantic houses; one of the most popular is Caru cu Bere. One thing to be prepared for before going to Bucharest is that you should have a comfy hotel bed because you will most likely, more than once, eat yourself into a near comatose state. The food is so delicious and served in such large portions after your done eating your done for the day. All you can do is lay down and sleep it off.

Romanians tend to eat their largest meal of the day at lunchtime where it’s not uncommon to have at least a three-courses. If you want a traditional Romanian lunch, you can order a starter such as ciorba (sour soup) or vinete (eggplant salad) and then a popular main course is fasole cu carnati (beans and sausage) or a pork steak with cabbage salad. Then you top it off with a rich desert such as papanasi (homemade donuts). Gaining holiday weight is a given in Bucharest.

After your required afternoon nap, you can head out to Herastrau Park. It’s the largest park in Bucharest stretching over 100 hectares. Here you will be enveloped by the natural perfume of the city, which carries hints of the lemon trees and flowers. On the sidewalks in the middle of town you can find cherry trees, blackberry trees, apricot trees and so many flowered trees that it makes you want to “stop and smell the roses”.