A Dream Deferred–Off to Ireland!

By: Longing for Him Posted in: Destination, Ireland 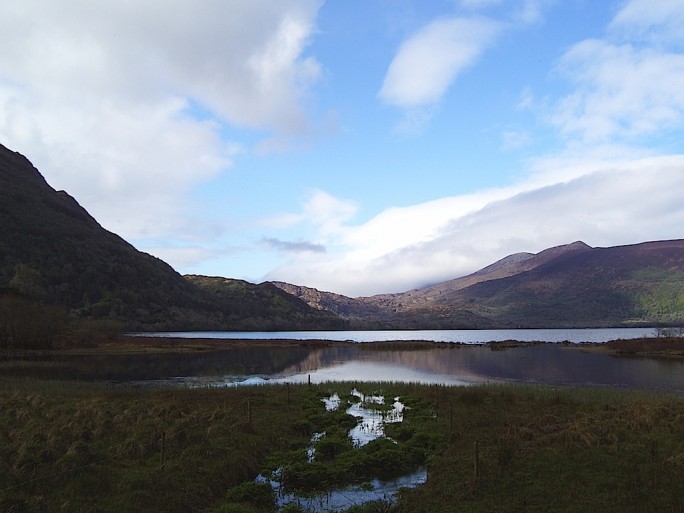 I am a rabid St. Patrick fan–have been ever since I was a little girl who loved pinching those apathetic party-poopers who chose not to wear green on March 17. At the top of my childhood bucket list was my desire to visit a Celtic country–primarily St. Patrick’s Ireland or Scotland. I worked in tobacco fields in the summer (the only way a child in my neck of the North Carolina woods could earn money back in the ’70s) to save money for that dreamed-of trip abroad. Most of my meager earnings went to new school clothes or recreational activities, but I managed to put minute amounts in my basement hiding place for that Celtic excursion. I remember the summer of my 12th year when my grand total in the trip fund was $15.

One steamy July morning, I walked to my little country church for Sunday services. What a surprise to see a new face in the pulpit! It was a representative from the Gideons–the ones who raise money to purchase Bibles to put in hotels, hospitals and other such places. But this guest speaker spent most of his sermon regaling us with stories of how the Gideons provided Bibles for people in foreign lands.

I was lost in a reverie of faraway places when suddenly church was ending and the offering plate was being passed. All money collected would go to the Gideons for their worthwhile work. My heart sank because I longed to donate to this cause, but I, like most young children, didn’t regularly bring money to church services.

Then I thought of the $15 tucked away in the basement. My mind said, “You’ll never go to Ireland or Scotland if you donate that money.” My heart said, “Give the money.”

I rushed out of the sanctuary and fairly flew back home, praying with every running step that the Gideon wouldn’t leave before I could get back. My prayers were answered. When I jogged back, sweaty and out of breath, I saw him outside of the church, talking to the small crowd.

I ran up to him, holding out my $15, gasping that I wanted to help send Bibles to foreign lands. To this day, I remember exactly how that kind man looked at me. As a child, I didn’t understand his quizzical yet loving look. As an adult, I realize that his heart was probably touched by the innocent, impulsive gesture of a child to whom $15 was a small fortune.

It seems I barely blinked and was suddenly grown and the mother of several children. There was no time nor money for pleasure trips anywhere in the U.S.–much less to Celtic countries. Still I dreamed of the Emerald Isle and lilting accents. In December 1999, I stood among thousands in Baltimore, MD, as the results were announced for an eight-hand Irish figure dance competition at the Southern Regional Oireachtas (qualifying rounds for the World Championships of Irish dance in Belfast, Northern Ireland). To my utter shock, my 12-year-old daughter’s team was the winner. The huge ballroom seemed to spin as I realized that I would be going to Ireland within months!

In April 2000, I stood in the spacious beauty of a Catholic church in Ireland on a weekday, sunlight shining through the stained glass windows in the silence of the empty church. As my overflowing heart lifted a praise to my Creator for allowing me to live my dream and to check off one of the top things on my 30-year-old bucket list, I suddenly was taken back to that 12-year-old girl (the very age of my precious dancer daughter) holding out a wad of crumpled one-dollar bills to pay for Bibles abroad.

And I knew that perhaps we do indeed reap what we sow, even when we are not even expecting a return.

Since then, I have been to the Republic of Ireland and Northern Ireland two more times with my champion Irish dancing children. I was last there in the spring of 2008 when I determined before boarding the plane out of Charlotte, NC, that I would make this trip a pilgrimage in search of the essence of my hero, St. Patrick. The first stop on my St. Patrick pilgrimage was the Hill of Tara in County Meath, Ireland–the ancient sacred site where the high kings of Ireland were supposedly crowned in the pre-Christian era of Ireland. There, two of my children and I stood beside what is purported to be the Lia Fáil or Stone of Destiny which was used as an inauguration stone for the kings of Ireland. Supposedly St. Patrick visited this site shortly after he lit his famous Paschal fire on the nearby Hill of Slane. The second stop as I paid homage to St. Patrick was the historic Hill of Slane, also in County Meath, about 16 kilometers (9.9 miles) from the Hill of Tara. Today the ruins of Slane Friary’s church and college, abandoned in 1723, occupy the site. Some scholars believe that St. Patrick, in 433 A.D., lit a huge fire at the Easter season to defy the Irish High King Laoire who did not allow other fires to be lighted while he burned his pagan festival fire on the Hill of Tara. From the Hill of Slane in the Republic of Ireland, it was on to County Down in Northern Ireland, south of Belfast. In the town of Downpatrick stands the majestic Down Cathedral, a late 18th-century restoration of an 1183 Benedictine Monastery. Here it is said St. Patrick is buried. Born in about 389 A.D., he had come to Ireland as a 16-year-old slave boy stolen from his home on the isle of Britain, escaped back to his home, then returned to Ireland later in adulthood when he felt compelled to spread the Gospel to the Irish people. He died on what we now call St. Patrick’s Day, March 17, @461 A.D. Behind the Down Cathedral is a stone with a plaque that tells the story of St. Patrick being buried there, just a couple of miles from the small village where he had preached his first sermon in a barn. Supposedly he is in good company in this tranquil resting place–with St. Brigid and St. Columba nearby. My son, who had qualified to dance solo in the World Championships that year, and I laid freshly picked daffodils on the stone that lies atop my hero’s grave before solemnly leaving that sacred site. Just a few miles from Down Cathedral lies the tiny village of Saul where St. Patrick preached his first sermon in the barn of the local chieftain Dichu who had been converted to Christianity. In 432, the first Christian church in all of Ireland was built nearby. In 1932, a replica of that first church, complete with a round tower, was built on the site of the original Saul Church.

I “just happened” to arrive there on the Saturday night before Easter and was able to attend the Easter Sunday service there, complete with communion at the altar. This experience seemed almost surreal to me–as if it had all been orchestrated by a divine hand.

In the background of the church, on a high hill called Slieve Patrick in the viewable distance, stands a giant statue of St. Patrick erected in 1932 to commemorate the 1500th anniversary of his 432 A.D. return to Ireland. My final stop on my St. Patrick pilgrimage was Slieve Patrick–very near Saul Church–where the giant statue of the saint towers at the crest of the peak. On the path leading up the steep hill, there are various stops to view Biblical statues and scenes before arriving at the pinnacle where the base of the huge statue has panels depicting the life of St. Patrick.

I may have been a grown woman at the time of this sacred pilgrimage that I was blessed by God to take, but inside I was that late-bloomer of a little girl who had just turned 12 and yearned to visit the Emerald Isle. What seemed so far away and nearly impossible on that sticky July day in 1974 materialized into vivid reality during Easter week 2008. A nearly dead childhood dream had been resurrected.

God’s pretty good at doing that, isn’t He?