Taking on the Mean Streets of Taipei - Bucket List Publications

Taking on the Mean Streets of Taipei

Traffic in Taipei is ridiculous. Everyone that lives in Taipei has come to terms with this, but if you’ve never been to Taipei before be prepared for a shock. There is no regard for pedestrians of any kind. Pedestrians must cross the street on high alert because cars and scooters will stop for no one and nothing in their mission to be first. Coming from countries where drivers are expected to stop before the crosswalk this used to be incredibly irritating. Then, recently, I had what I thought was a stunning epiphany. It occurred to me that I was looking at driving in Taipei all wrong. Perhaps the laws here dictate that vehicles have the right of way and pedestrians should wait until all traffic has cleared? It seemed like a simple and logical explanation to the chaos I see every day.  I asked around to see if this theory had merit, but no. Pedestrians do have the right of way.

It’s just that nobody cares.

Oh, well. Life would be pretty boring if we didn’t add in all those “…and then my life flashed before my eyes” moments every time we crossed a street, wouldn’t it?

Following are some examples of common, every day, batshit driving in Taipei:

That car wouldn’t dare turn in front of all those cars and scooters would he? 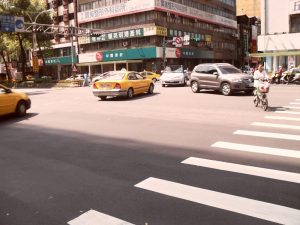 Yes. He would. Along with his buddy behind him and biker in front.

As chaotic and unmanageable as it sounds there is a certain rhythm and flow to the traffic that all motorists seem to know. Even though scooters squeeze their way into every available space, causing cars to slam on their brakes as they’re cut off with less than a foot to spare, there seems to be an incredibly high tolerance for bad driving and an astounding lack of road rage. I’ve never seen such calm and dispassionate acceptance of  pervasive assholery in my life.

I’m bringing this up because I’m now in the process of learning to drive a scooter. Taipei is not like Poland. Outside of Taipei it is a lot tougher to get around without your own set of wheels.  Honestly, the idea of puttering around the countryside on a scooter is very tempting, and I can’t pass up this opportunity to learn something new. I’ve always wanted to learn how to drive a motorcycle. It’s no motorcycle, but it’s a step in the right direction.

My friend Jeff, being the kind generous person that he is, took me out a couple of weekends ago and let me give it a go in a riverside park. It was late at night and aside from a late night basketball game and a couple badminton players the park was mostly deserted.  I drove around slowly wobbling up and down the length of the park while he snickered from the safety of solid ground. I managed to turn both left and right without losing my balance and even mastered a few figure eights. I drove back to my studio slowly that night calmly stopping at every yellow light, not pushing or shoving my way between cars and, in general, obeying traffic laws as I know them. I also drove with Jeff sitting behind me hollering in my ear to go faster.  Did I feel ready to try driving Taiwanese style yet? He wanted to know. No, Jeff. No.

A few nights later we tried again. This time, we started from a small park near my apartment.  The goal was to try to find a new community gym where I could go work out, mine having closed down due to renovations.

My gut kept clenching. Knowing that any miscalculation could cause me to splatter all over the concrete like a juicy sack of meat with only the worthless protection of a very badly fitted helmet was giving me some anxiety. The dangers were all too real and my imagination was running wild.  It didn’t help that before I had gone five feet, and while I was still trying to get my balance, two cops drove past on their scooters and stopped at the Family Mart ten yards up the road. They then turned and proceeded to eye me with suspicion. One of them glanced under my helmet and then gave me a surprised little smile when he realized I was a foreigner.

I felt paralyzed. I slowly moved up a few more feet so Jeff could hop on the back, but I didn’t know what to do. I wanted to wait until they had driven off, but they weren’t moving and Jeff was screaming in my ear to just go! Go! Go!

I quietly freaked out all the way up the alley to the main road. I came to a screeching stop simultaneously managing to hit the accelerator and the brake, and nearly fell off the scooter again.  And who should immediately pass me? The two cops of course. I braced myself for the worst but they kept going, barely hitting the brakes before they pulled out onto the main road and sped off.

All I can say is that would never, ever happen in the States. Ever. Of all the examples I can give anyone of what a totally foreign place I live in that’s probably the best. Un-freaking-believable.

The rest of the ride was full of terrifying starts and stops, near misses, scarily out of control turns, and toward the end, one illegal u-turn on my part. I also have a vague recollection of maybe running a red.  Every time I braked I managed to turn the handle and accelerate at the same time. It did not help that Jeff was hollering in my ear the entire time.

Go! Turn left! No, right! BRAKE! Stop accelerating! Go faster! Whoa! Whoa, go slower! Turn! Turn! Can you just turn around in the street? No? Where are you going?!  Just TURN! STOP accelerating when you’re braking!!

It was with sheer relief that we finally found the gym. After I parked I glanced at Jeff. The look of absolute disgust on his face was priceless.  He hasn’t let me try again since, but I’m hoping I can wear him down.  Now that I’ve had a taste of being behind the handles of a scooter I know I’m addicted.  This little adventure will end with buying my own scooter. I can just feel it. 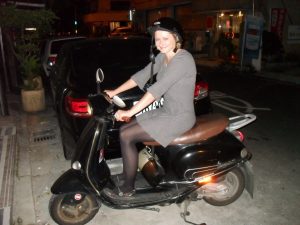 Next time, I’ll be on my own scooter.

Our San Antonio bucket list was super easy to create. There are so many unique bucket list experiences that we keep going back for more...
END_OF_DOCUMENT_TOKEN_TO_BE_REPLACED

Last year, Athena spent her birthday at home with us. We couldn't have friends over to celebrate and we could only get her things that ...
END_OF_DOCUMENT_TOKEN_TO_BE_REPLACED

What cities are on your travel bucket list for 2021? When we think of travel, we think of climbing hills to watch the sunrise, cocktail...
END_OF_DOCUMENT_TOKEN_TO_BE_REPLACED 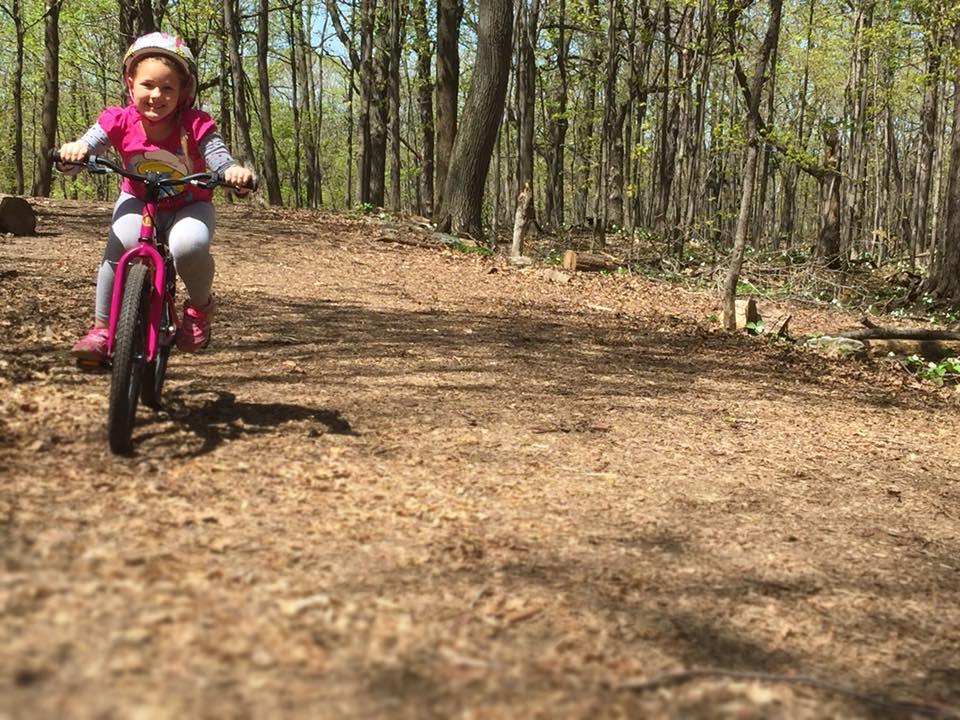 It's important that physical activity be a regular part of family life. There are plenty of ways to encourage outdoor fitness for the w...
END_OF_DOCUMENT_TOKEN_TO_BE_REPLACED 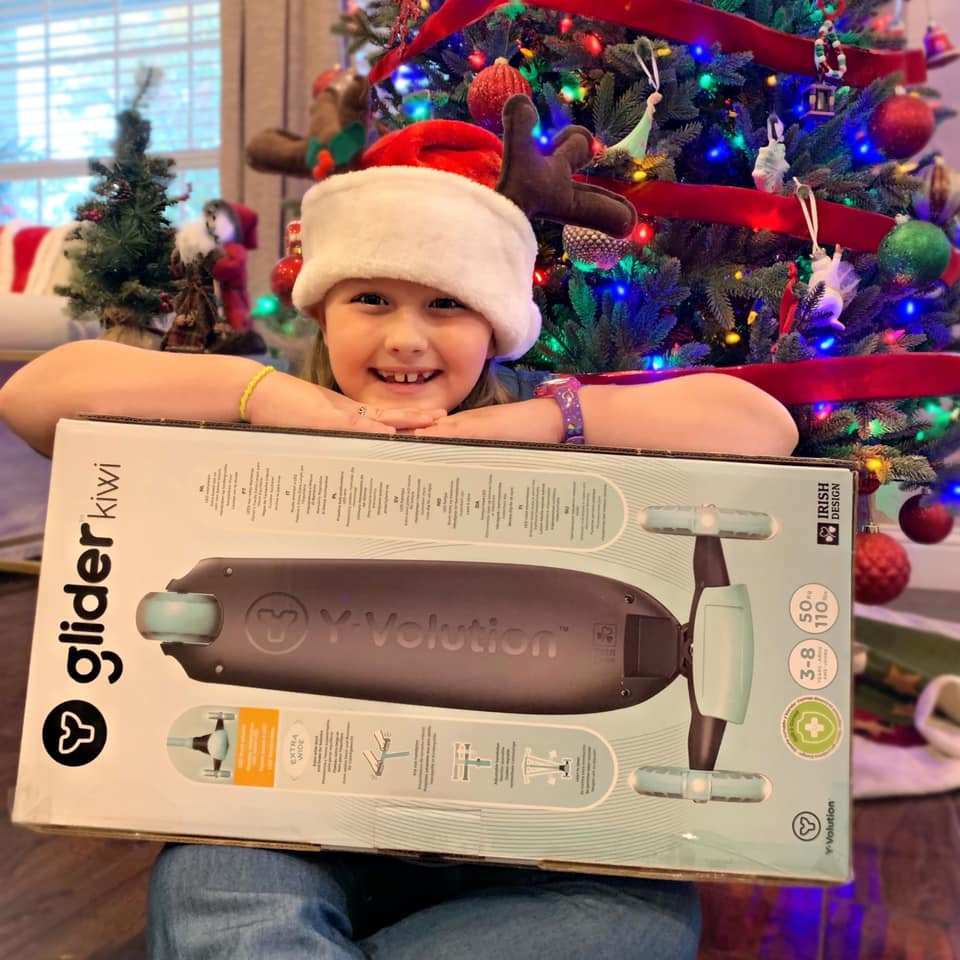 We are strong believers in the benefits of outdoor play for kids. There is nothing quite like the feeling of adrenaline and the wind in...
END_OF_DOCUMENT_TOKEN_TO_BE_REPLACED

Grandscape will be one of the largest and most unique mixed-use real estate developments in the country upon completion. Located in the...
END_OF_DOCUMENT_TOKEN_TO_BE_REPLACED

I've driven every type of vehicle that I can. I have experience with stock cars, Formula One, super cars, and Indy cars. I've driven mo...
END_OF_DOCUMENT_TOKEN_TO_BE_REPLACED

Traveling to Colombia soon? Excellent choice. You’ll not regret this one. But let me give you a little sneak peek of what Colombia is a...
END_OF_DOCUMENT_TOKEN_TO_BE_REPLACED

Fun, mysterious, and extremely beautiful, Cuba is a country that should be on the bucket list of every global traveler. The small islan...
END_OF_DOCUMENT_TOKEN_TO_BE_REPLACED

The State Fair of Texas is held each fall at Dallas Fair Park. The Fair has taken place every year since 1886 and it usually begins the...
END_OF_DOCUMENT_TOKEN_TO_BE_REPLACED

There are so many activities to choose from for your Mont Tremblant summer bucket list that we came up with an entire list dedicated sp...
END_OF_DOCUMENT_TOKEN_TO_BE_REPLACED

11 thoughts on “Taking on the Mean Streets of Taipei”