Stumbling Upon Bliss on The West Coast Trail

You know those rare, incredible moments when all seems right with the world? When you feel absolute, pure happiness? I encountered one of those moments on the heels of one of the toughest, most rewarding challenges I’ve faced: backpacking the West Coast Trail. 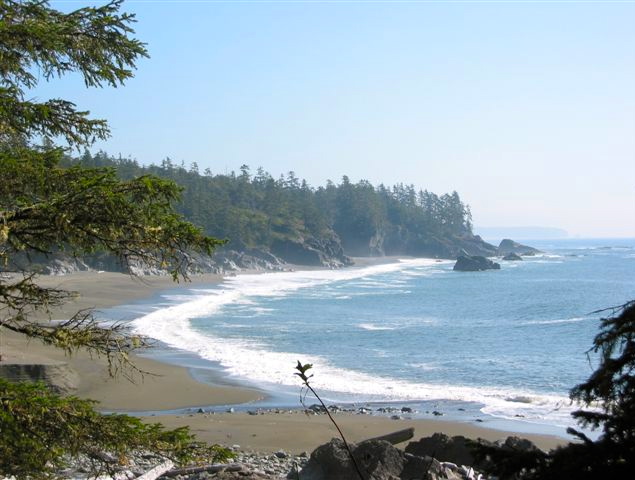 The West Coast Trail (WCT) is part of the Pacific Rim National Park along southwest Vancouver Island. It’s often called Canada’s top hike, and for good reason – it’s incredibly rugged and breathtakingly beautiful, with crashing surf, dense rainforest, old-growth trees and beautiful cliffs. It was created as a life-saving trail in the early 1900s for survivors of the many shipwrecks that happened along the coast. 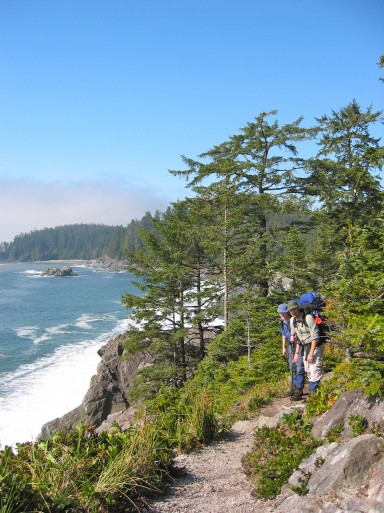 The West Coast Trail is an adventure, to say the least. It’s 75 kilometers/47 miles long and typically takes six to eight days to complete. You start at one end and finish at the other… meaning, if you feel too tired, bruised, blistered or just plain fed up after day three to continue, you can’t call someone to come and pick you up. There are no roads in. So you’re in it for the duration – unless you need to be evacuated from the trail.

I embarked on this adventure with my husband Chris and our best buddy Dennis.    We’d read about the trek and heard it was hard, but given the trail follows the coast and there’s not a lot of elevation involved, we figured it would be pretty straightforward.  Ha!

It’s a hard trek. Awesome. Worth it. But hard.

During the mandatory orientation session at the trailhead, we were told a number of fear-inducing facts: several people (47, if memory serves me) were airlifted off the trail that season due to injuries. ?!?  Also, bear and cougar were sighted on the trail the day before, including a cougar that climbed past a hiker on a trail ladder. WHAT?  Oh, and we were instructed on tide tables so we could avoid the risks of being stranded at high tide.

Here are Dennis, Chris and I before setting out. We’re a little freaked out from the orientation session, but excited too. I can’t believe how clean we look! 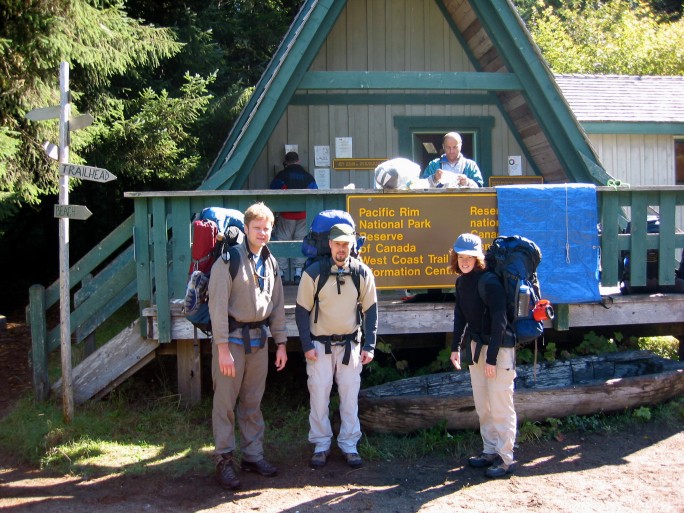 We were in a temperate rainforest which is famous for, well, lots and lots of rain. We really lucked out because our weather was fantastic, but we weren’t so lucky in that it had rained for three weeks straight before our arrival. So we encountered* lots and lots of mud and water on the trail.

*ran into, slipped into, fell into 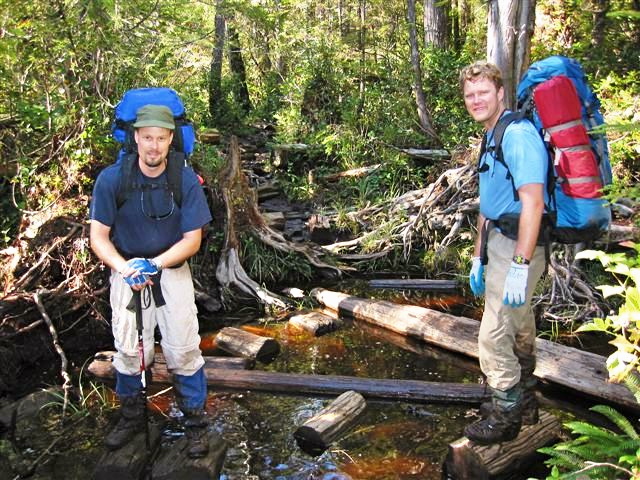 I have to say, the trail kicked us in the pants.  At one point or another we each hit a wall, wondering, “Can I do this? Can I make it to the end?!”  Thankfully we were a solid team, motivating each other when things got tough… usually by loudly singing the Indiana Jones theme song.

During the trek, we had two choices: hike along the beach keeping a close eye on the tide, or hike higher up on the inland forest trail. We chose a mixture of the two. 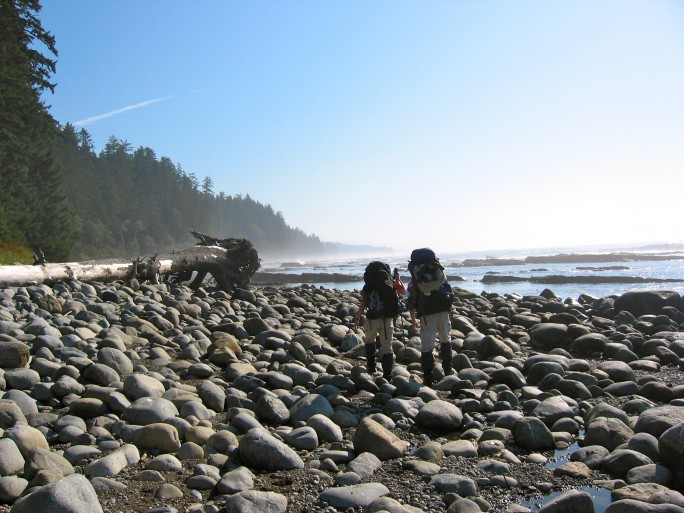 The inland route was also beautiful, but offered its own special bag of tricks:

The mud, which got pretty tiring after awhile. 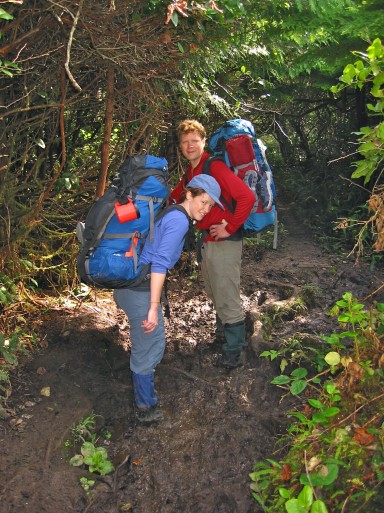 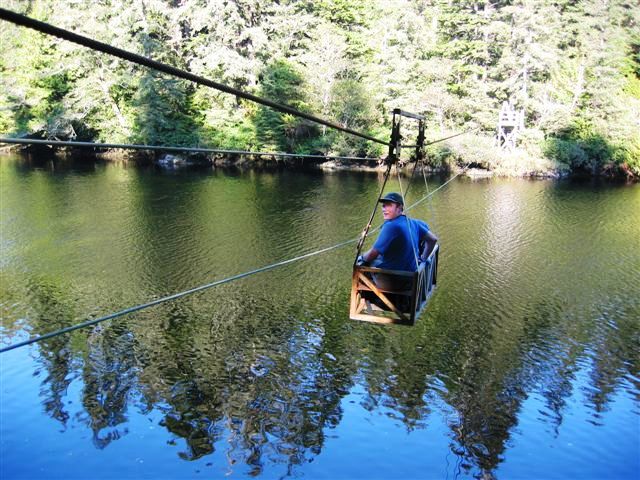 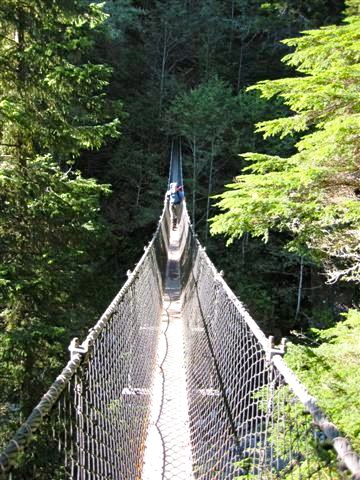 And occasionally, a washed-out trail with no clear indication of an alternate path. 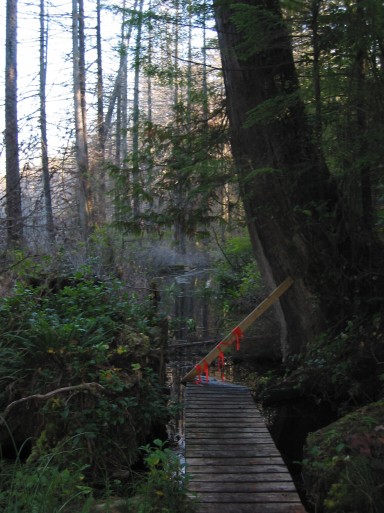 And in between the beach and the upper forest were ladders connecting the two trails.  One section of ladders extended 200 rungs up the cliff side. 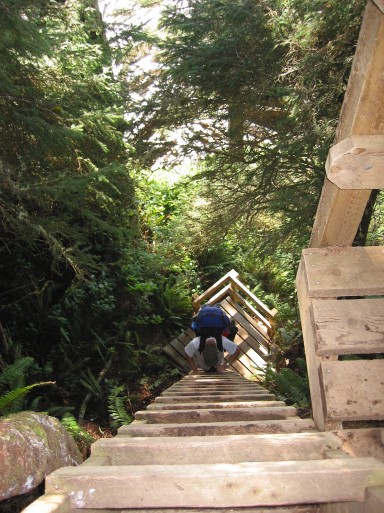 Strangely, we were grateful for those ladders. They were easy to grip and a welcome break from the mud, water, roots, rocks, broken boardwalks and slippery logs of the forest trail. 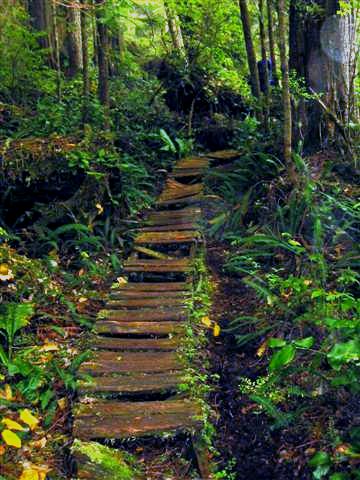 One night tested all my inner reserves of courage.

Late that afternoon as we were hiking the inland route, we missed the path leading to the beach camp where we planned to spend the night. And by the time we realized it, we also realized that it was another couple of kilometers to the next camp. Uh oh.

The West Coast Trail is a real challenge in full daylight – any step could result in a twisted ankle or much worse. At nighttime, compound that exponentially.

It got dark very quickly. Alarm bells were going off in my brain. Our headlamps seemed oh-so-faint in the immense blackness. We stumbled over roots, slipped on rocks and tried to stay calm.  Chris valiantly took the lead, and we made lots of racket, singing loudly – interspersed with lots of yelling (and swearing) – in the hopes of scaring any wildlife off the trail.

I was terrified. More scared than I had ever been in my life. Scared one of us would be injured (it would be almost impossible to get help), scared of being stuck in the forest overnight on the trail, concerned that we wouldn’t find the next pathway to camp given that it was pitch black out, and particularly worried that we’d encounter a very large, very hungry cougar.

We continued on for what seemed like an eternity. It was all I could do to keep from panicking, but I put on my big-girl-pants and managed to hold it together. We finally found a faint trail that led down to the beach, and made our way down to camp.

We were so lucky.  And so grateful to be safe.

Without a doubt, the trek was as mentally and emotionally challenging as it was physically.  It presented many tests of inner strength – stuff we hadn’t contemplated – compressed into a 7-day time period: perseverance, patience, humour, the ability to deal with the unexpected, intense fatigue, and at times, fear – and the ability to work as a team under all those factors. 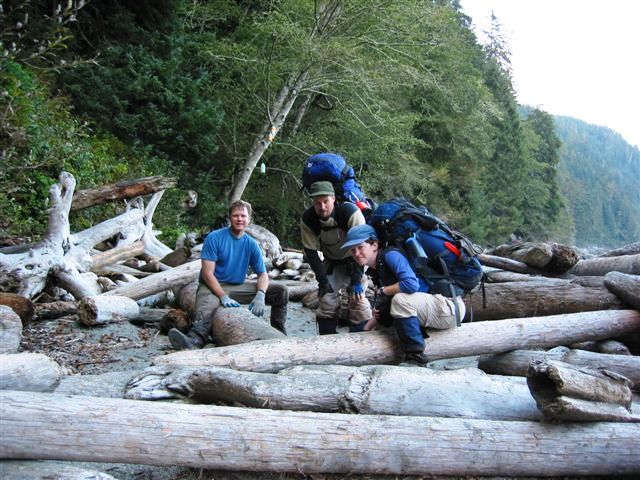 But with all the challenges, there were the amazing aspects of the trek we couldn’t replace: hiking among some of Canada’s tallest trees; relaxing by the fire in the evenings, sharing stories with fellow hikers that became friends; and eating fresh crab and burgers – the latter at Monique’s, a most-welcome makeshift ‘restaurant’ in the wilderness. 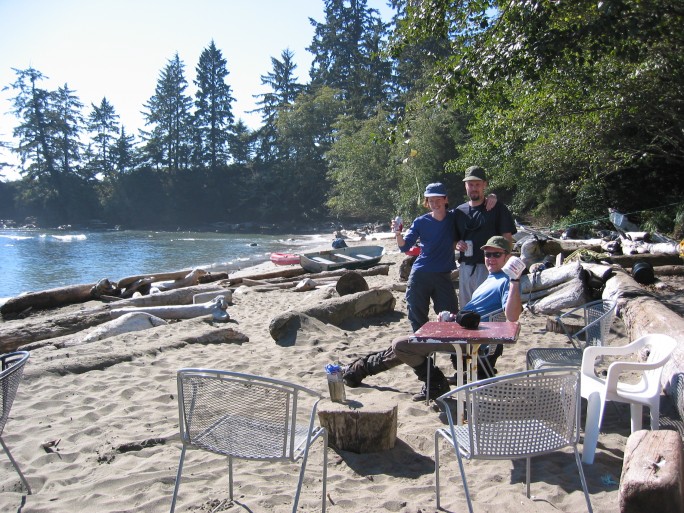 We were constantly rewarded with magnificent views. 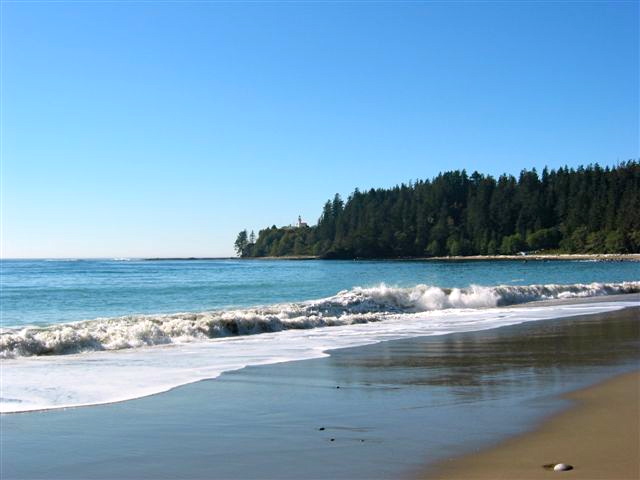 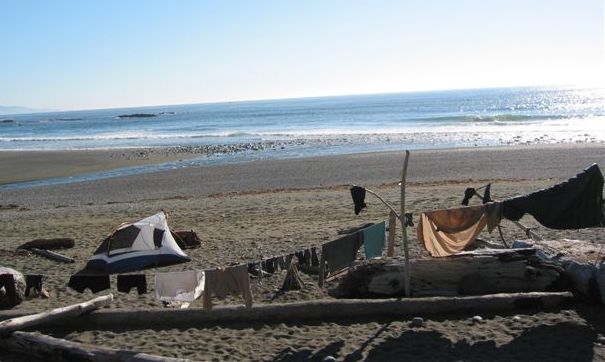 And the sunsets were nothing short of spectacular. 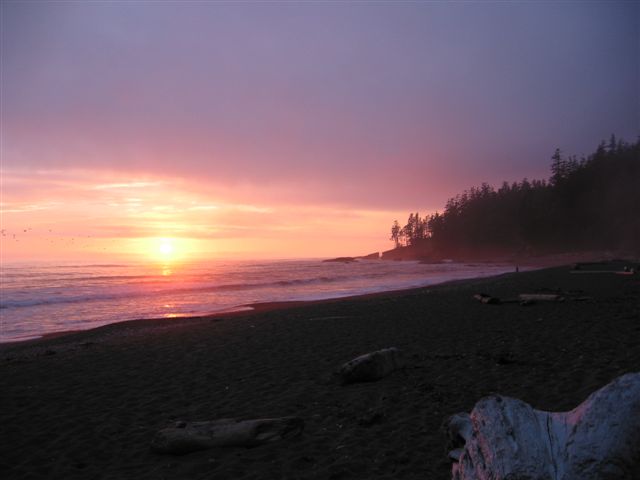 And then, a day or so after our scary experience, we did it. We completed the West Coast Trail!

We don’t look quite as clean as we did in the beginning though. 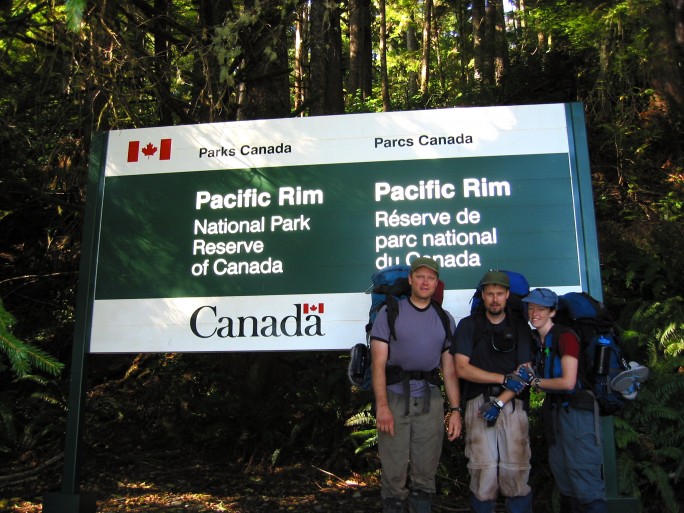 At the end of the trek I felt completely overwhelmed. I needed to be alone with my thoughts for awhile just to process the experience, so I wandered around.  Without my pack, of course.

We got in Dennis’ vehicle and headed back down to Victoria, about a 2-hour drive. It was a gorgeous day, we were driving along the coast, the ocean was sparkling and the sun was shining through towering trees. The windows were down, the wind was in our hair and we were listing to great music.

In that moment, anything seemed possible.

I learned so much from our West Coast Trail experience – but mainly, that our perceived limits are just that: perceived.  And the reward from that is immeasurable.

Featured Writer: Christine Callahan-Oke at: The Brighter Side of Life

Our San Antonio bucket list was super easy to create. There are so many unique bucket list experiences that we keep going back for more...
END_OF_DOCUMENT_TOKEN_TO_BE_REPLACED

Last year, Athena spent her birthday at home with us. We couldn't have friends over to celebrate and we could only get her things that ...
END_OF_DOCUMENT_TOKEN_TO_BE_REPLACED

What cities are on your travel bucket list for 2021? When we think of travel, we think of climbing hills to watch the sunrise, cocktail...
END_OF_DOCUMENT_TOKEN_TO_BE_REPLACED

Grandscape will be one of the largest and most unique mixed-use real estate developments in the country upon completion. Located in the...
END_OF_DOCUMENT_TOKEN_TO_BE_REPLACED

I've driven every type of vehicle that I can. I have experience with stock cars, Formula One, super cars, and Indy cars. I've driven mo...
END_OF_DOCUMENT_TOKEN_TO_BE_REPLACED

Traveling to Colombia soon? Excellent choice. You’ll not regret this one. But let me give you a little sneak peek of what Colombia is a...
END_OF_DOCUMENT_TOKEN_TO_BE_REPLACED

Fun, mysterious, and extremely beautiful, Cuba is a country that should be on the bucket list of every global traveler. The small islan...
END_OF_DOCUMENT_TOKEN_TO_BE_REPLACED

The State Fair of Texas is held each fall at Dallas Fair Park. The Fair has taken place every year since 1886 and it usually begins the...
END_OF_DOCUMENT_TOKEN_TO_BE_REPLACED

There are so many activities to choose from for your Mont Tremblant summer bucket list that we came up with an entire list dedicated sp...
END_OF_DOCUMENT_TOKEN_TO_BE_REPLACED

From unique tree-top suites with butlers, to private Marrakech villas, these luxury getaways stand apart for their extraordinary attrib...
END_OF_DOCUMENT_TOKEN_TO_BE_REPLACED

There are few things in the world better than getting the chance to travel. That love of travel lets you explore new places, meet new p...
END_OF_DOCUMENT_TOKEN_TO_BE_REPLACED

9 thoughts on “Stumbling Upon Bliss on The West Coast Trail”