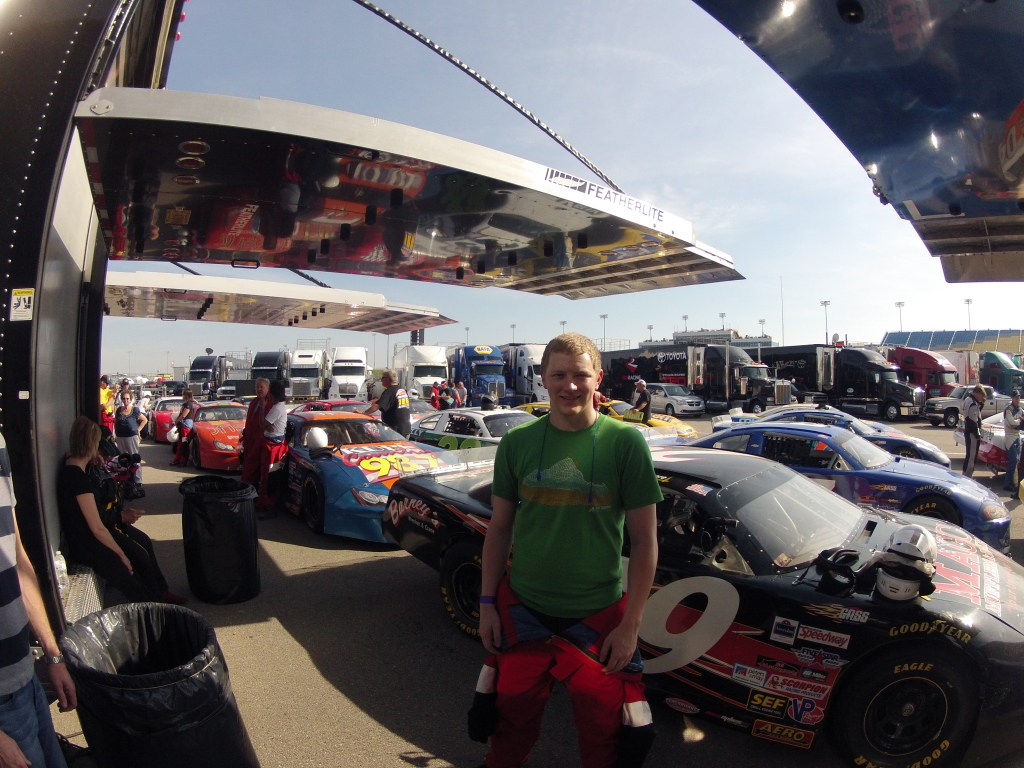 *We at Bucket List Publications are overjoyed when we can make bucket list dreams come true for our readers. It filled my heart with happiness and excitement when I personally contacted one reader, Ian, and told him his bucket list dream of driving a race car was going to come true. After making arrangements with Paul at GASS Racing School, he was going to feel the G-force at Iowa Speedway behind the steering wheel of an actual race car.

Bridling at over 400 horsepower, smelling the gooey rubber as it pealed across the radiating asphalt, tasting the bitter 100+ octane fuel vapor in the air, blinking away the sweat rolling in my eyes as my vision ever narrowed, deafened, and feeling the weight of my innards being thrust out of place, my brain was processing information faster than if I were attacked by a lion… although, I could argue I was being attacked by a lion.

Nearly one week before Memorial Day, I was in the passenger seat experiencing all of the above in one of GASS Racing’s professional stock cars. GASS Racing School offers racing fans, or gearheads in general, the opportunity to either ride-along for an experience, all the way to a full day of racing lessons and entrance into an official stock car race broadcasted on GASS TV. I was there for a ride-along followed by watching the professionals do it from the hot pit. Soon, I plan on returning and actually race one of these beasts.

My initial reaction upon arriving to the Newton Iowa Speedway was that of sheer zeal. Pulling up to the immensely large oval speedway to find out it was actually short by speedway standards (7/8 mile), followed by the rumbling echo of highly tuned V8s jackhammering their way around the track.

I was entering the pits as a car would thunder by on their qualifying lap at over 150 mph, disappear for a matter of seconds only leaving a trail of sound and sticky rubber behind, to reappear with an even more thunderous hurrah than it came with. Spin-outs were commonplace as racers pushed their cars to the limit of grip in an attempt to get as high of a pole position as possible once the official race commenced. I watched all of this in aw, at the same time itching at the eventuality that I would soon be in a first person narrative of the race car, lack third person.

Suiting up, I could hardly contain my excitement. The cars were all in the pits, lined up and ready to be released from the gate. I put on my fire suit provided by GASS Racing, my Nomex head sock, Nomex gloves, neck protector, and then finally my white racing helmet… initially with the visor up. I stood next to my black, number 20 car, waiting to be assisted into the window (there were no doors). A man with GASS began locking me into my 5 point harness, two at the shoulders, two near the legs, and one on the helmet… the word “move”, does not exist within the racecar, but it sure as hell does outside of it. This is when claustrophobia can easily creep in. Not to mention it was easily 100 degrees inside the car, sweat was dripping everywhere and it was impossible to wipe my brow, noxious fumes coupled with melting rubber was all that could be smelled, followed by the waiting anticipation of wanting to just “GO!”.

Immediately before given the green light

Given the go-ahead, my driver Paul turned on the engine, which was immediately deafening. The sensations were incredible, it was quite literally a sensory overload… a true symphony of science was at work. A mechanical machine melded with an organic man, simultaneously conspiring to get around this racetrack as fast as both will allow. You can tell from my first paragraph that no input was left unchecked. The true mastery of what happened when I was in that racecar could never be accurately expressed in words, let alone video or photography. A watched 10 minutes on the track was a mere 30 seconds internally… how’s that for relativity?

I do plan on going back, but next time I will be behind the wheel… I can’t even imagine the experience that will ensue once that cultivates. All I can do now is tell everyone and their nearest friend to get out and experience it themselves because nothing really compares, except for maybe being attacked by a lion.

Writers note: I would like to thank Lesley and her bucketlist webpage for making all this possible, much appreciated and hopefully I can turn the favor the other way some day.