Hiking in the Spectacular Mont-Rebei Gorge

As we were looking for some activity to do this weekend, we found a MTB route in Mont-Rebei’s gorge near Lerida, considered as the most difficult route in Catalonia. I asked some cyclist friends and they recommended me not to do it by bike, as if you fail you can fall from 100m high. We decided to do it walking as it seems to be really worth it. We found a holiday cottage called Casa Perdiu in Guardia de Noguera. I strongly recommend it as it is not expensive, it is really clean, quiet, the owners are really nice and for only 10€ you have a really consistent and home-made dinner. Their only mistake is to have their website only in catalan, but I suppose that they may speak English. The hostess was really welcoming and gave us some information for our tours. The house has even a lift for people who can’t afford to go up the stairs with their luggage. What you need to know is that the village is really small and there is no shop to buy food apart from Tremp, 10km far away. Even in Tremp, bakeries don’t open until 9.30am, but you have a supermarket at the end of the town opened from 9h15 till 21h15 at low season. That’s a pity; because the cottage is on the way to the Congost, and we lost some time and arrived at the Congost at 10h30.

If you come from Tremp, you have to take the C13 southwards and turn towards Guardia de Noguera / Congost de Mont-Rebei. If you come from Barcelona, take the C1311 at  The road is quite bended and not in the best conditions, but if you come in spring you may rewarded by almond trees in blossom surrounding the road. A few kilometers after Alsamora, just before the river, pay attention to a sign on your left that indicates “P Masieta de Mont-Rebei”. Follow the dirt track that goes down to the car park, which is even equipped with a public toilet. 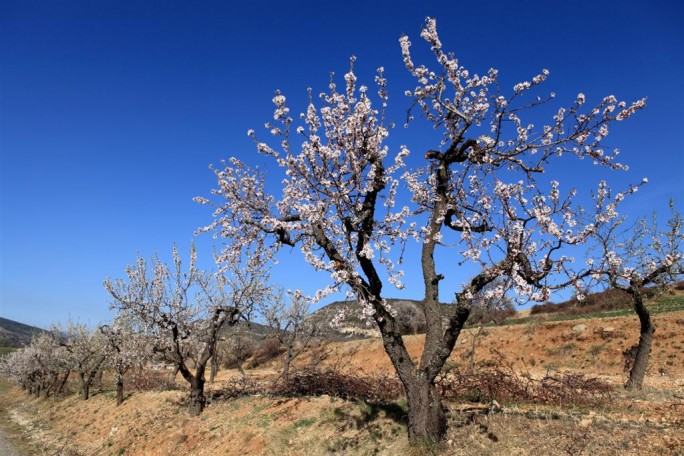 Two tracks allow you to cover the gorge, one was the ancient one that is now often flooded since the Canelles’ dam was built; that’s why a second one was digged into the rock 30m higher. As this year has been really dry, with almost no rain for the last 4 months, both tracks were accessible, thus we decided to take first the highest track to check that the oldest one was really in good conditions. You just have to follow the GR1 signs. Not far from the car park, you can take another track that we decided to take on our way back. Both tracks take you to a suspension bridge, which is sincerely not so impressive as we believed according to other testimonies. It moves a little bit, but nothing unbearable, except if you suffer from strong vertigo. 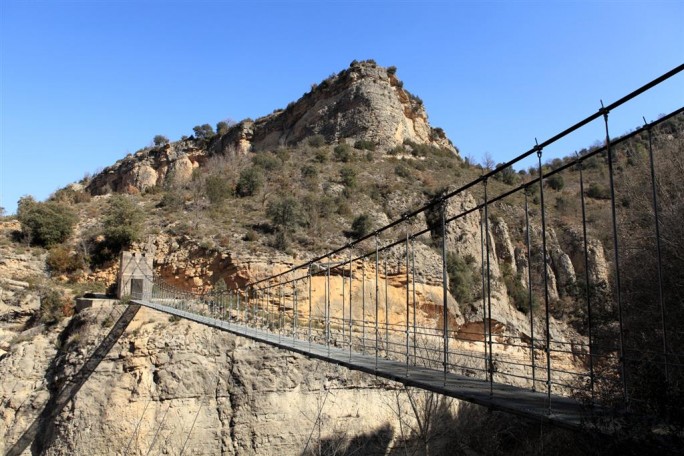 After the bridge you have the possibility to choose between the two tracks I mentioned at the beginning, taking in consideration that the lowest track is not always affordable. It is indicated by a sign announcing the danger of falling rocks, which is really a risk as you can see mass of fallen rocks at various parts of the track. The thing is not to go there after rain as the risk is higher. 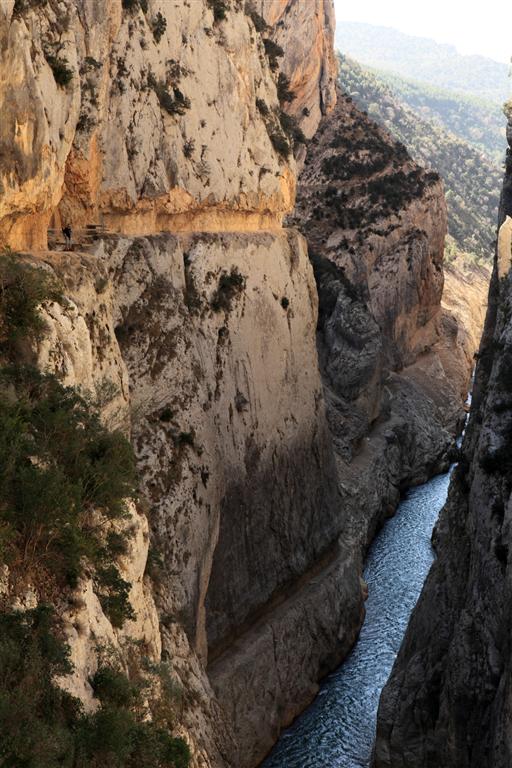 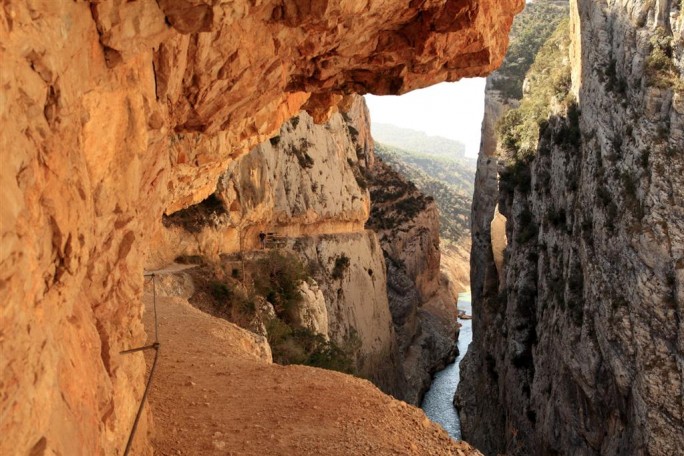 The highest track is quite impressive but the handrail helps you feel secured. There are also many benches on the way for people to have a rest sitting in Catalonia and enjoying views of Aragon, as the Noguera Ribogorzana’s river is the natural separation between the two regions. As it was Friday in March, we only met a couple of hikers, so we enjoyed the quietness of this magical place at 100%. The viewpoint after the tunnel enables you to  contemplate a panoramic view of the gorge. 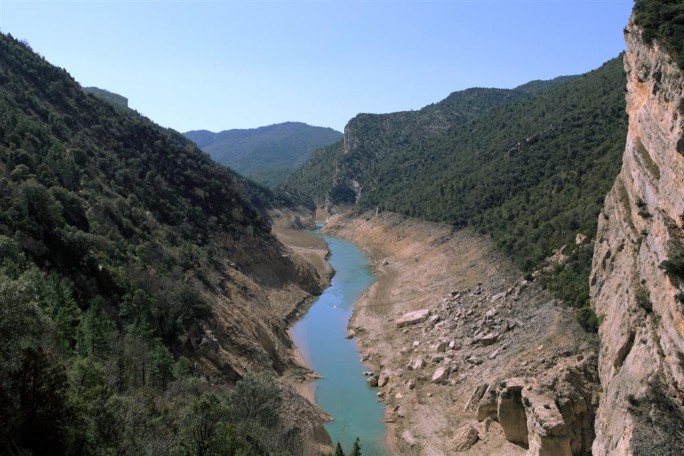 Shortly after, when you are almost done with the path in the rock, you can see a track at your left going up to the Colomera’s Cove. It is work going up if you not afraid of altitude, as you have an incomparable view from there. The way is really well equipped with staples and chains, like you can find in Via Ferratas, but in this case they are there only for you to feel secured, as you can climb without using them. 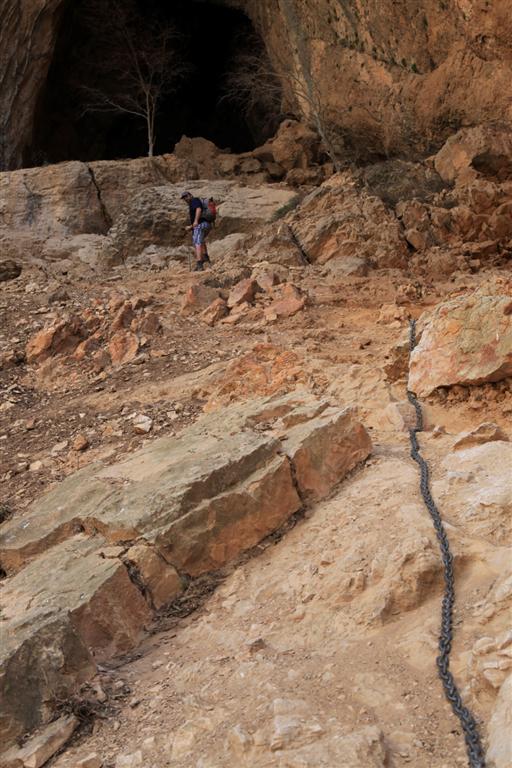 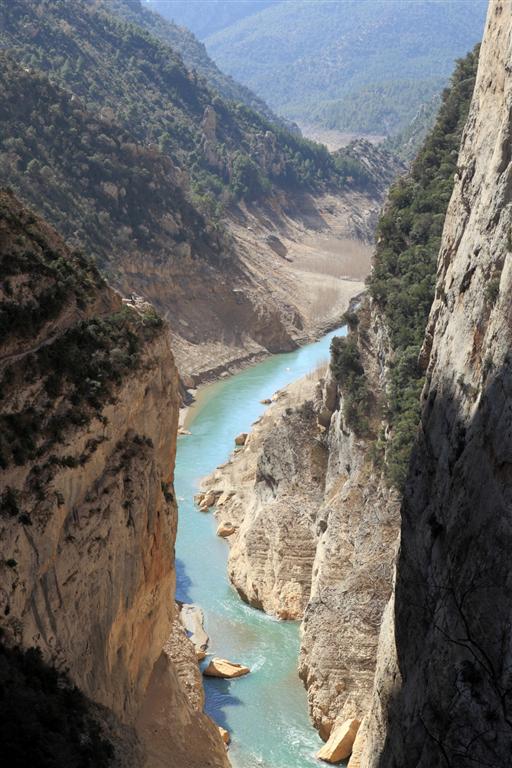 Once you get back to the track, if you follow your way you will see on your right-hand  a track with the sign warning about the danger of falling rocks. It is where you have to turn if you want to go back to the Masieta via the old track. I saw in other blogs that you can follow up to a refuge and go back your way or keep walking on the GR1 up to La Pertusa’s hermitage in Corça, but you need to have another car that you had previously left there. If you can afford it, I strongly recommend the way we took, as both tracks give you two different perspectives of the gorge. You have to be careful on the lowest track not to slip on the stones and make sure you don’t do it in the wet season, as the risks of scree are higher. It may take you 2h30 if you don’t stop every two minutes to take pictures as we did! 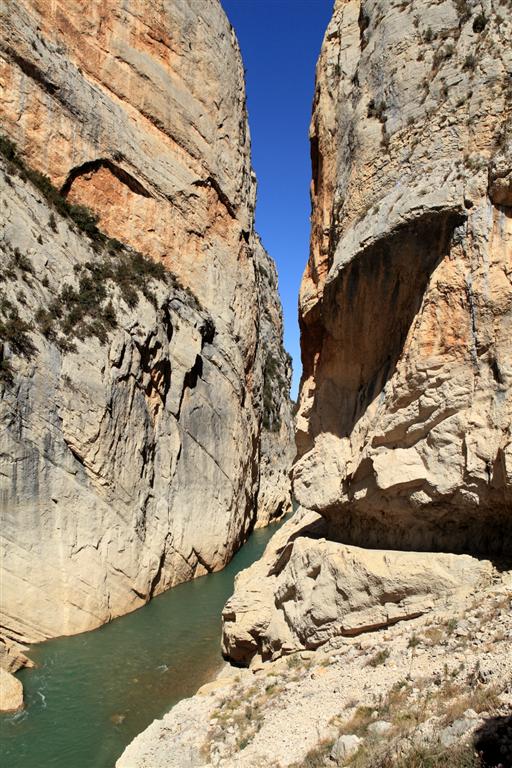 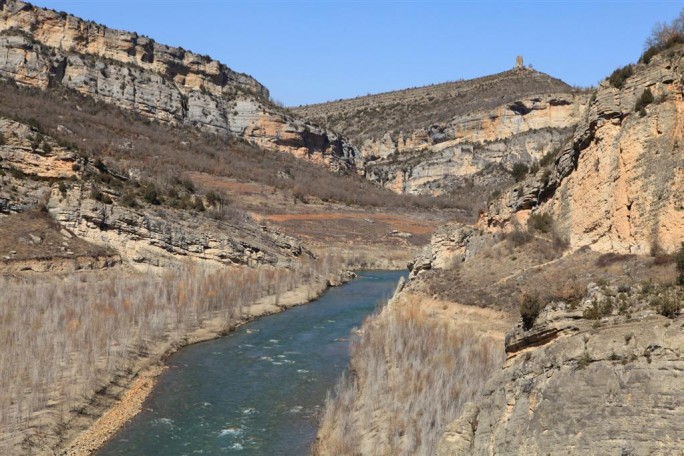 As it was still early, we decided to check the views from a highest point, at Montsec Astronomic Observatory (1570m). Unfortunately the observatory didn’t allow me to take a 360º panoramic picture, but at least a 180º. We discovered that Sant Alis was the highest point in the nearby (1675m), but it was too late to drive back there. 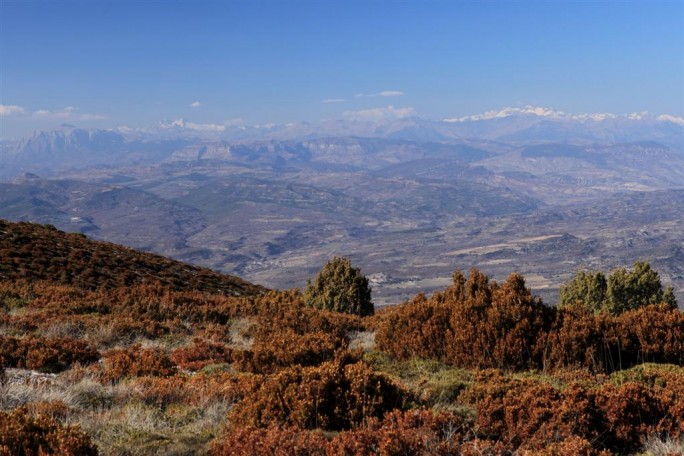 As our hostess had recommended us, we then drove to the medieval Salas de Pallers, a few km north of Tremp. to have a look at some shops, decorated as in the past, but everything was closed as we arrived at around 7pm.  We then visited La Pobla de Segur, but that has not the charm of a mountain village with its big residential blocks. We went back to Salas de Pallers to have dinner in a bar/restaurant called Salasse. The atmosphere was good, we had first a cup of wine in the sofa near the chimney with good English music on the background. Pizzas are really original and flavourful.

Weekend getaways should be the easiest of all to pack for, right? After all, you know where you're going, what you'll be doing, and wha...
END_OF_DOCUMENT_TOKEN_TO_BE_REPLACED

Our San Antonio bucket list was super easy to create. There are so many unique bucket list experiences that we keep going back for more...
END_OF_DOCUMENT_TOKEN_TO_BE_REPLACED

On a recent Royal Caribbean cruise, I encountered countless parallels between game development and travel activities and professions. F...
END_OF_DOCUMENT_TOKEN_TO_BE_REPLACED

Recently, Saudi Arabia restored direct flights to Thailand after 32 years. Do you know the history behind the cold relationship between...
END_OF_DOCUMENT_TOKEN_TO_BE_REPLACED

The Palm Beaches are perfect for family travel. Whether you're interested in the beach as a natural playground or exploring the more wi...
END_OF_DOCUMENT_TOKEN_TO_BE_REPLACED

Flower tourism comes alive during the spring and summer. With so many different kinds of wild flora, it’s difficult to decide where bes...
END_OF_DOCUMENT_TOKEN_TO_BE_REPLACED

It’s easier than ever to take amazing photos of your travels so you always have those memories. Your phone is a high-quality camera, so...
END_OF_DOCUMENT_TOKEN_TO_BE_REPLACED

Last year, Athena spent her birthday at home with us. We couldn't have friends over to celebrate and we could only get her things that ...
END_OF_DOCUMENT_TOKEN_TO_BE_REPLACED

What cities are on your travel bucket list for 2021? When we think of travel, we think of climbing hills to watch the sunrise, cocktail...
END_OF_DOCUMENT_TOKEN_TO_BE_REPLACED

Grandscape will be one of the largest and most unique mixed-use real estate developments in the country upon completion. Located in the...
END_OF_DOCUMENT_TOKEN_TO_BE_REPLACED

A digital nomad travels the world and works remotely. With the assistance of technology, nomads use the advancements and opportunities ...
END_OF_DOCUMENT_TOKEN_TO_BE_REPLACED

5 thoughts on “Hiking in the Spectacular Mont-Rebei Gorge”