The architectural layout of a city and surrounding ambiance induces one to walk.  Walking downtown Vancouver gives you access to heritage and contemporary structures, of nature’s treasures and verdant vistas under aquamarine skies.

On my first visit in April 2012, I wanted to savor, to hold all. I had choice of boarding the Hop-On-Hop-Off bus circling Vancouver’s downtown hemisphere, register for a walking tour, or independently experiencing the vantage city points, the synchronized setting of alleys and streets making city walkable and accessible. Walking downtown Vancouver was the perfect choice. Check out the neighborhoods in downtown Vancouver with me. 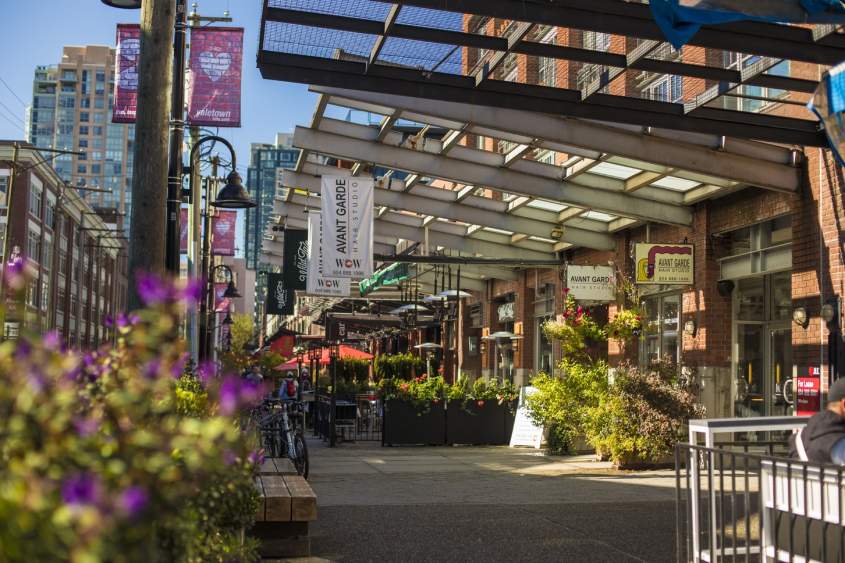 I followed the cherry blossoms trees along Pacific Boulevard and the loading docks converted into sidewalks with outdoor patios for enjoying  lazy afternoons, towards the old red brick CP Roundhouse, the former CP headquarters (Davie Street and Pacific Boulevard). The Roundhouse is now a Community Centre with the old engine turntable modified into an outdoor amphitheatre. From Davie Street the sea walk extends along False Creek to Stanley Park.

A quick sandwich and coffee at Starbucks, (Mainland and Davie St) I turned towards  Hamilton Street and Cambie Street passing the Queen Elizabeth Theater and what appears as the art and theater district. Using the Hop-On-Hop-Off bus route map for reference I took detours depending on quirkiness or appeal of the area. The benevolent mid-afternoon sun providing the face-lift to the predictable facade of brick housing and office complexes.

To me a city’s artistic consciousness is presented by its libraries, whether housed in heritage buildings or modern contraptions and the Coliseum shaped Vancouver Public Library on West Georgia Street did not disappoint. The unique architecture of the nine storey brick rectangular building, constructed in 1989, is set off by an enclosed glass roofed concourse that serves as an entry foyer to the library and as public space and piazza with eateries and coffee bars.

The interior of the Library is encircled by an elliptical and free-standing colonnaded wall and reading and study areas accessed by bridges. The natural light adds to the continuity and timeless qualities of learning and I spent an hour flipping through magazines and newspapers in company of seniors and maybe homeless too.

The Library Square, next to the Library, consists of the outer entrance of the Library, retail outlets, newsstands and coffee shops.  The bordering buildings, the Canada Post building on West Georgia Street, the CBC Regional Broadcast Centre on Hamilton Street. ‘The Centre” formerly the Ford Centre for Performing Arts on Homer Street complements the architectural layout of the Library Square and the Library. 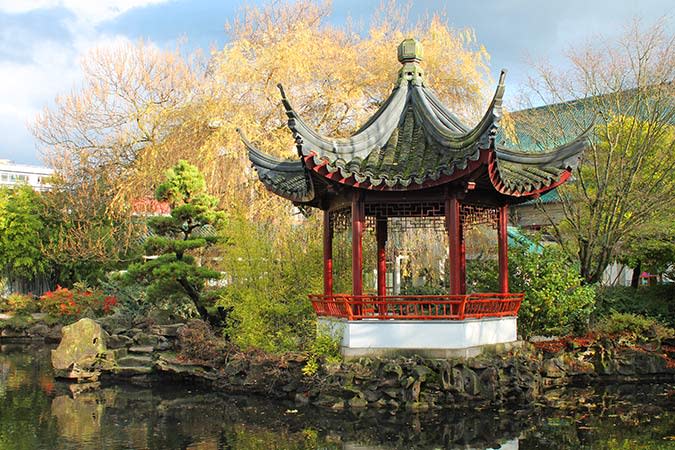 From the Library, in natural progression of horizontal lines, my next stop should have been Gastown, the antiquated slice of downtown Vancouver situated along Pender, Hastings, Cambie and Water Streets and the Water front. I was advised by friends to avoid the area between East Hastings and Main Street, designated as DTES or Downtown eastside, but ‘curiosity killed the cat’ and I could not resist taking a peek at the forbidden area, the southwest corner of Main Street and Hastings, the frequent use corner for open air drug market. In daytime it was intimidating, groups and people slouching around, and not willing to take a chance backtracked towards Chinatown. On another day driving via the Hastings strip, I could see the reason for the advisory. The pavements were converted into open lounges with couches, chairs, rugs or any sit-able piece turning the area into fiefdoms. The police are at hand to check or avoid mishaps and since this is a subject in which I have no interest did not pursue knowing about the drug policies of the city.

In contrast, the Sun Yat-Sen Classical Chinese Garden (Keefer and Carrall Street) was serene and inspirational; a lone man was practicing Tai Chi, reminding me of the gardens in Hong Kong.

The Vancouver China Town, the oldest in Canada, started out as home to Chinese labor and workers in early 1800s and later in the 1990s for Chinese from Hong Kong, Mainland China and other Asian countries.

The newer Chinese residents spread around Vancouver city relegating China Town with its narrow alleys, red architecture, lanterns, tea shops, eating places and Mahjong centers, as heritage preserved and showcased. Chinatown stretches from Downtown Financial and Central Business Districts in the west, the old Japan town in the northeast, the residential Strathcona in the east and Gastown in the south. 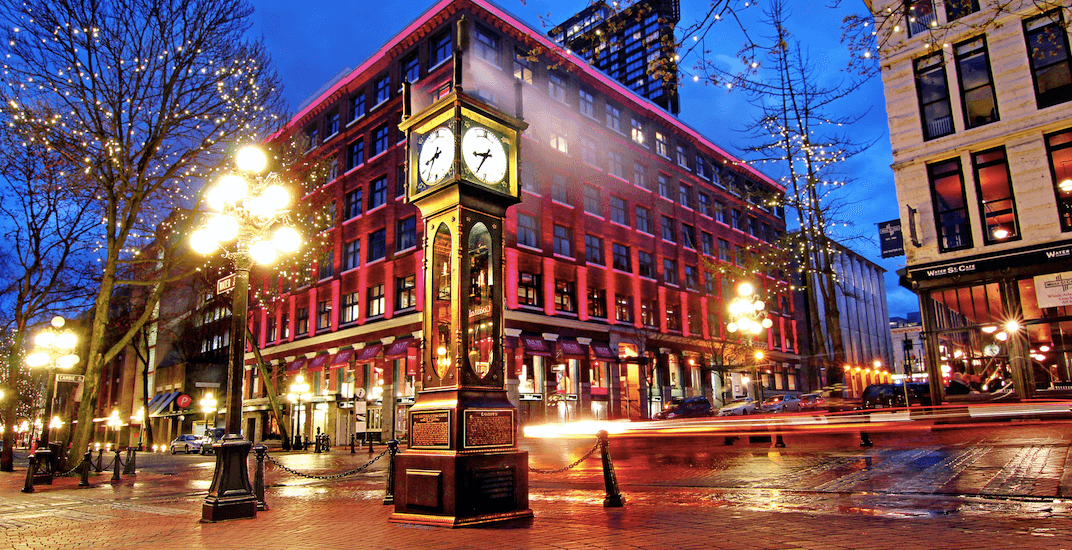 By now it appeared as if I was stalking history, the cobbled lanes and alleys flanked by dated constructions, reverberating to the chimes of another era existing with the present. From Chinatown, I played it safe, quieter neighborhoods, and walked Columbia Street, turning right on East Pender and towards Alexander Street and what is Vancouver’s first downtown. Gas Town, named after “Gassy” Jack Deighton, a Yorkshire seaman who arrived in 1867 to open the area’s first saloon, was the trigger boom for general trade, profusion of sawmills, seaport, salons and resorts for out of work loggers, seamen and fishermen.  In 1886 the Canadian Pacific Railway terminated on the shore parallel to Water Street adding to the commercial significance of Gas Town. The present Gastown was rebuilt on the ruins of the 1886 fire when the area was completely gutted.

Water Street is the action-oriented, contemporary street with boutiques, furnishing studios, shoe stores, the famous Canada Jade store, I purchased a jade Inukshuk (the Inuit symbol of the human spirit and communication), restaurants, pubs and clubs, galleries, music and art studios, technology and media outlets.  Engrossed in the sights, the show windows and the activity around, I was startled when a young-middle aged person, in unwashed skirt and shirt, stage-whispered for some money. I smiled, wondering if I had heard right and when she insisted I shook my head and tried to move ahead when she came up with a scorcher,  ‘you could get killed for this’. I dashed inside a souvenir shop, aware of her presence, and waited for few minutes before exiting. The woman was still there, trailing other tourists, and I think she saw me again but by then I had slunked towards the Water Front Station. Later I came to know that begging or asking for money is a newer trend, it was not there few years back, and now when I recollect there were others recognizable by their looks, slouch and stares, spill-overs from East Hasting area.

The incident put me off from visiting Water Street in the evening when the area turns into a vibrant, glittery party place. I was content with the day time attractions; the cobbled streets with trade mark simulated gas lamps, the preserved brick buildings converted into boutiques, restaurants and shops, the original ‘Gaslight Steam Clock’ on Cambie Street, one of only two in the , built by a local clockmaker. The Clock is powered by a steam system that was previously used to heat buildings through underground pipeline. The burst of steam every 15 minutes sets off steam whistles to the tune of Westminster chimes. At entrance of Water Street is the ‘The Landing’, a 1905 heritage building renovated in 1988 into an up market shopping arcade and rom the Bay windows one can see the North Shore Mountains and Burrad Inlet.

The street mood changed with the walk towards Canada Place from the Waterfront station. The cool sea breeze, spectacular views of the sprawling Stanley Park, the North Shore and snow-covered peaks, the water front along Burrad inlet and the billowing 27-meter-high (88-feet) Teflon-coated fiberglass “sails” that resemble a cruise ship with the Vancouver Convention and Exhibition Centre, the World Trade Centre, the CN Imax Theatre, the Pan Pacific Hotel and the dock and terminal for Alaska bound ships.

The elegant blue landmark sculpture, the ‘ Drop’ by artist Inges Idee, on the Bon Voyage Plaza at Burrad Street waterfront adds to the freshness of natural surroundings.

Canada Place, constructed for the 1986 World Exposition, is located across the Vancouver Visitor Information Centre, the place to pick up city maps etc., and the Waterfront Centre and Hotel. The promenade extends nearly three city blocks and though late afternoon the cool breeze was as gratifying as the frozen chocolate yoghurt whilst watching the seaplanes land and take off from the Seaplane base.

Still not willing to call it a day I took a cab, my legs were too tired by now, to 530 Robson Street outlet of Japa Dog, a food chain that started out as van or street food. The one on Robson street in a regular building and had to queue it out.

Finally got a bite into a Japa dog, the Japanese variant of the all American hot dog served in a bun with okonomiyaki, yakisoba, teriyaki, and Korean kimchi toppings with seaweed, soy sauce and wasabi mayo replacing sauerkraut, ketchup and mustard.

Robson Street or the ‘Champs-Elysees’ of Vancouver is an elegant and fascinating commercial center spruced with shopping malls, boutiques, art studios, cafés, bistros and restaurants. The place for high-end luxury brands is the underground Pacific Centre shopping mall (Howe Street) and I relegated it to the shopping segment of my stay.

Content with a day well-walked, I took the sky train to Burnaby.

Vancouver is one of the primary west coast cruise ports and a primary terminal for Alaska bound ships, making it the ideal starting place for your next cruise vacation.

Many people working in diverse industries usually partake in business travel since it’s essential for them to interact with colleagues,...
END_OF_DOCUMENT_TOKEN_TO_BE_REPLACED

Weekend getaways should be the easiest of all to pack for, right? After all, you know where you're going, what you'll be doing, and wha...
END_OF_DOCUMENT_TOKEN_TO_BE_REPLACED

Our San Antonio bucket list was super easy to create. There are so many unique bucket list experiences that we keep going back for more...
END_OF_DOCUMENT_TOKEN_TO_BE_REPLACED

On a recent Royal Caribbean cruise, I encountered countless parallels between game development and travel activities and professions. F...
END_OF_DOCUMENT_TOKEN_TO_BE_REPLACED

Recently, Saudi Arabia restored direct flights to Thailand after 32 years. Do you know the history behind the cold relationship between...
END_OF_DOCUMENT_TOKEN_TO_BE_REPLACED The Palm Beaches are perfect for family travel. Whether you're interested in the beach as a natural playground or exploring the more wi...
END_OF_DOCUMENT_TOKEN_TO_BE_REPLACED

Canada is one of the largest countries on the planet, coming in second to Russia. Given the sheer size, it stands to reason that there ...
END_OF_DOCUMENT_TOKEN_TO_BE_REPLACED

Flower tourism comes alive during the spring and summer. With so many different kinds of wild flora, it’s difficult to decide where bes...
END_OF_DOCUMENT_TOKEN_TO_BE_REPLACED

It’s easier than ever to take amazing photos of your travels so you always have those memories. Your phone is a high-quality camera, so...
END_OF_DOCUMENT_TOKEN_TO_BE_REPLACED

Last year, Athena spent her birthday at home with us. We couldn't have friends over to celebrate and we could only get her things that ...
END_OF_DOCUMENT_TOKEN_TO_BE_REPLACED

What cities are on your travel bucket list for 2021? When we think of travel, we think of climbing hills to watch the sunrise, cocktail...
END_OF_DOCUMENT_TOKEN_TO_BE_REPLACED