On our recent family trip to Nepal, I was initially concerned about how my kids would get on. Usually they lead quite separate lives. Our daughter, Lily is 10 and is into dancing, friends, shopping and watching Dance Moms. Our son, Jesse is 15 and likes surfing, spending hours on his Macbook, watching Mature-rated movies and constructing things in our back shed. They don’t fight but they also don’t do a lot together. 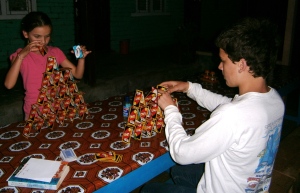 Uno cards are used for another game altogether

For a lot the trip there was no internet available, certainly no television and many hours to fill once we had finished trekking for the day.  As the trip progressed though, they started to play cards. They taught and learnt new games from the Nepalese porters and spent countless hours learning card tricks and making card towers. Together. 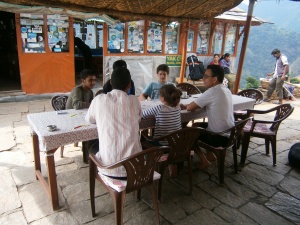 Hours of playing “Dumble” – a Nepalese card game were spent with the porters and guide.

My daughter also started to notice and ask about the games the Nepalese children were playing. What’s the game where they’re throwing rocks in the air? Jacks! As a child I spent many afternoons playing with plastic knucklebones – perfecting my throws and just whiling away the time until I could get to school and compete. We collected up some suitable rocks and we were off. 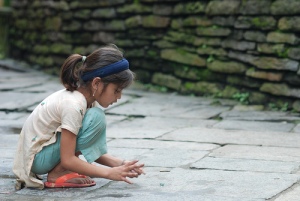 Similarly marbles are popular in Nepal. Again, she had never seen kids playing marbles and we watched excited and rowdy groups of boys knocking over their marbles, shouting at each other over and disputes and crowing with delight when they won some marbles from their opponents. Sometimes they didn’t have marbles and they just used small rocks.

Popular with the girls was hopscotch which we had played at home on the footpath. We also saw a game of elastics – using old string, and of course the wheel and the stick game that seems to be played in developing countries all over the world. 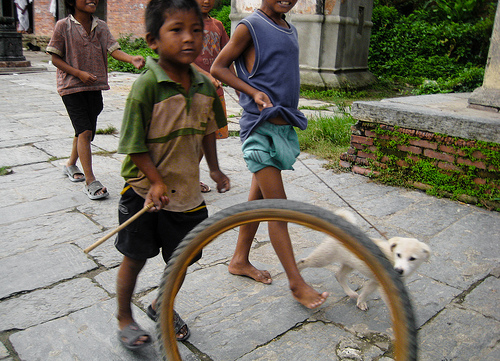 The wheel and stick game. Photo from Flickr by jeeheon

In Bandipur, there was a village square which was blocked off from traffic. When school finished we saw children running home to change into play clothes to quickly join the others to play. This went on until after dark. All night we could hear a cacophony of children’s shrieks of laughter – all playing in groups, and as far as I could tell, completely unsupervised. 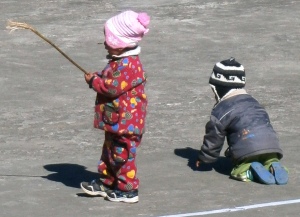 These kids had me crying with laughter. There are a lot of ponies in their town as there are no roads so the ponies are used as transport. These two were taking turns being the horse and the horse wrangler which involved lots of smacks on the bottom with a stick.

In another conversation Lily mentioned to me that they aren’t allowed to do cartwheels at school anymore. Too dangerous. What? Watching the Nepalese kids play with such zest and enthusiasm brought me to the realisation of how much children’s play here in Australia has changed over the space of just one generation. Activities are scheduled and there is very little time left for just playing and whiling away the hours. Of course most Nepalese children don’t have the opportunity to participate in these “enriching” activities and that’s also an issue but I do think we need to somehow give our children the opportunity to re-learn the valuable and important art of play. 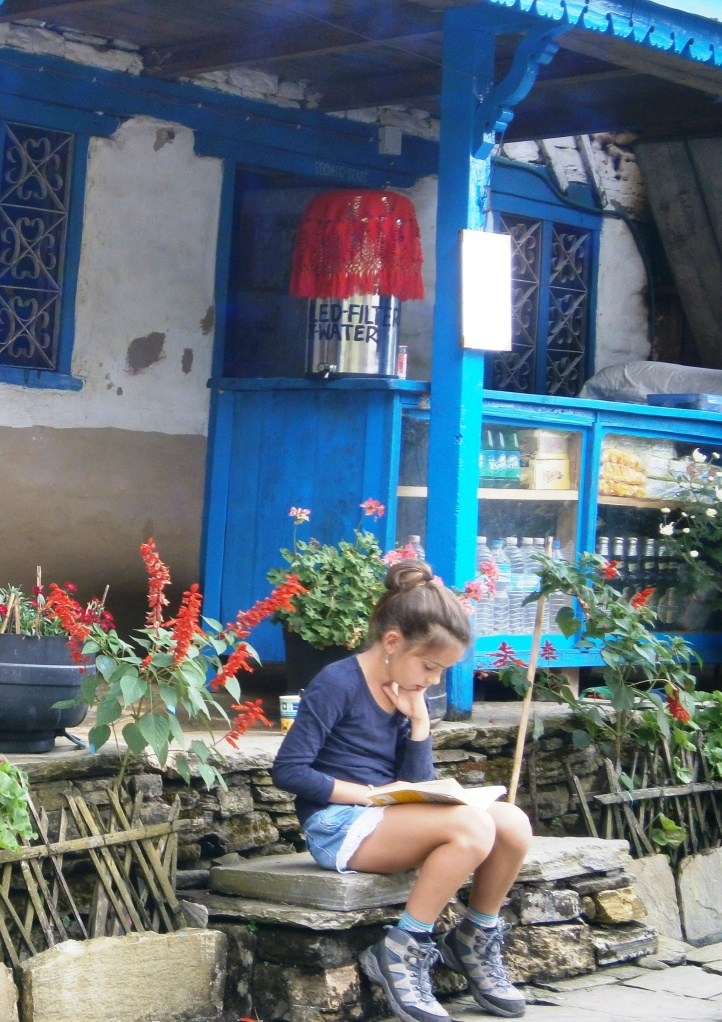 Lily has never been a reader. She has a room full of books but she has never finished one of them. This trip she picked up a book and didn’t stop reading until she finished it. She then related to me all the funny bits of the book that she liked.

Our San Antonio bucket list was super easy to create. There are so many unique bucket list experiences that we keep going back for more...
END_OF_DOCUMENT_TOKEN_TO_BE_REPLACED

Last year, Athena spent her birthday at home with us. We couldn't have friends over to celebrate and we could only get her things that ...
END_OF_DOCUMENT_TOKEN_TO_BE_REPLACED

What cities are on your travel bucket list for 2021? When we think of travel, we think of climbing hills to watch the sunrise, cocktail...
END_OF_DOCUMENT_TOKEN_TO_BE_REPLACED

Grandscape will be one of the largest and most unique mixed-use real estate developments in the country upon completion. Located in the...
END_OF_DOCUMENT_TOKEN_TO_BE_REPLACED

I've driven every type of vehicle that I can. I have experience with stock cars, Formula One, super cars, and Indy cars. I've driven mo...
END_OF_DOCUMENT_TOKEN_TO_BE_REPLACED 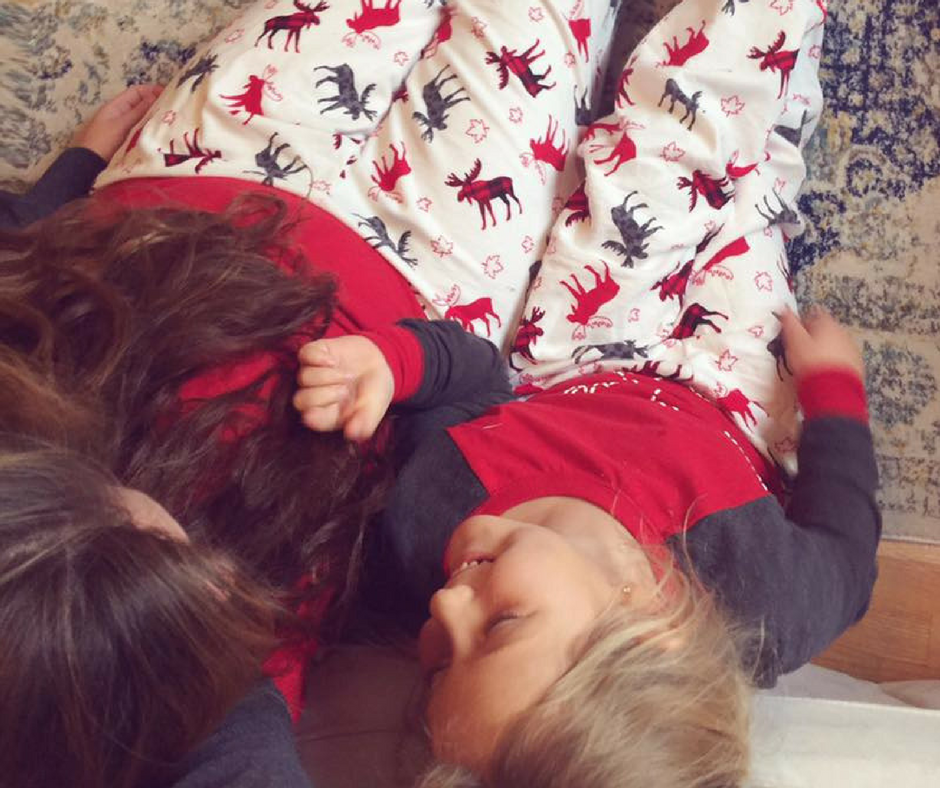 With the COVID-19 virus causing issues for people across the globe, many of us have been forced to stay inside for much longer periods ...
END_OF_DOCUMENT_TOKEN_TO_BE_REPLACED 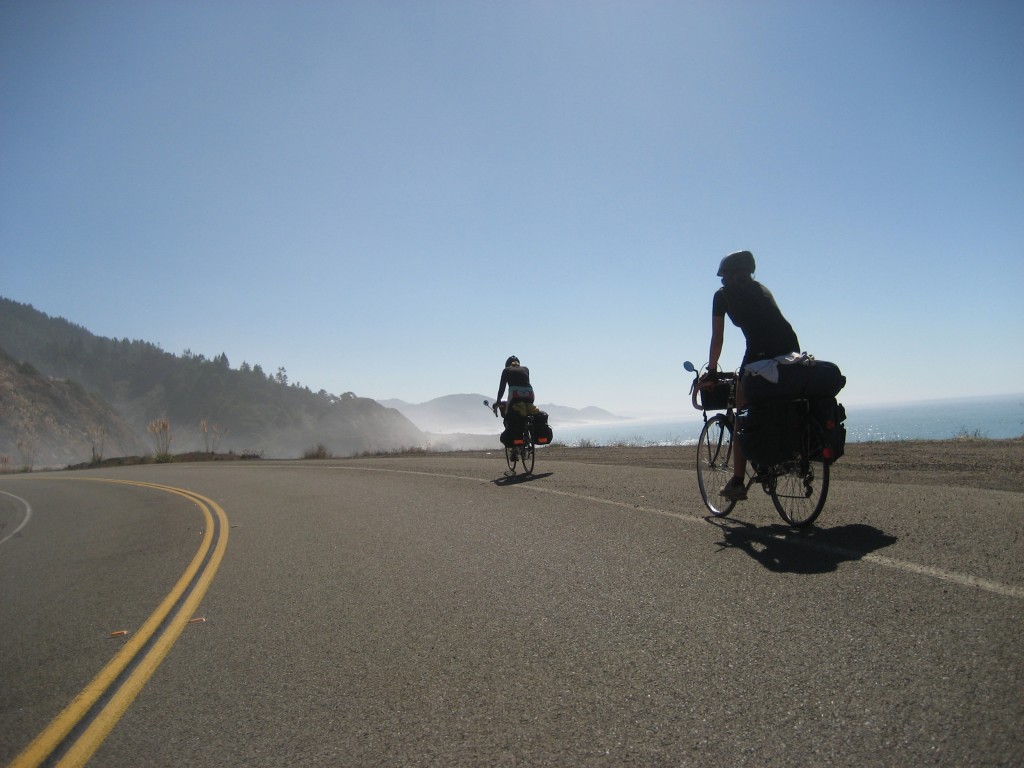 If you want to keep your family healthy, you have to consider a few different areas of wellness. In a nutshell, you need to put the rig...
END_OF_DOCUMENT_TOKEN_TO_BE_REPLACED 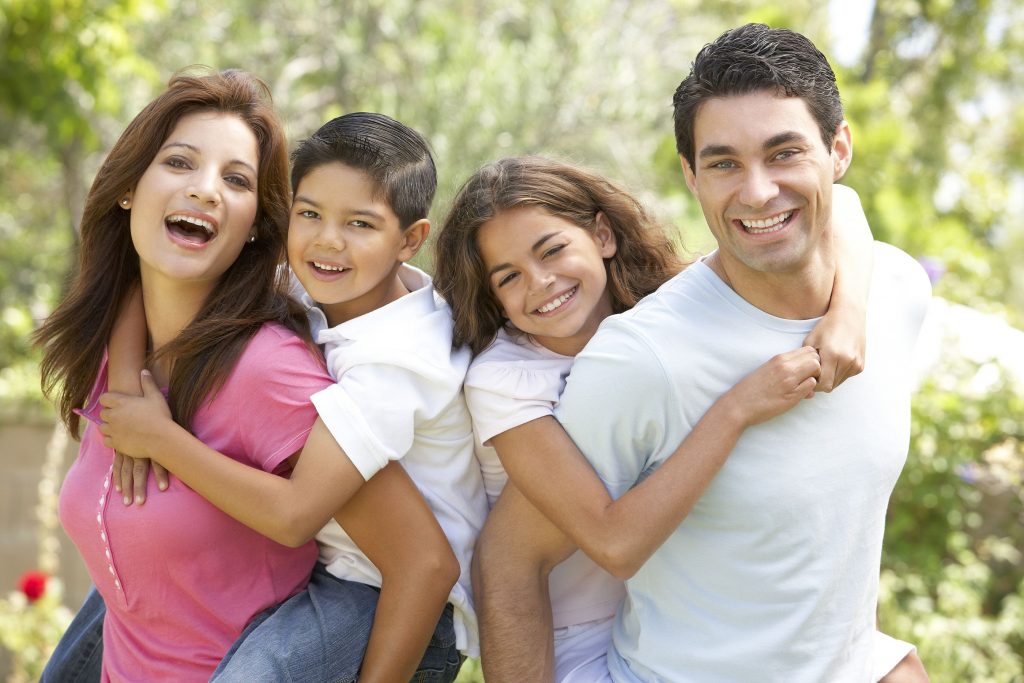 There's nothing more important that assuring health and wellness for your family. It's not always easy how to do it, but it's worth the...
END_OF_DOCUMENT_TOKEN_TO_BE_REPLACED 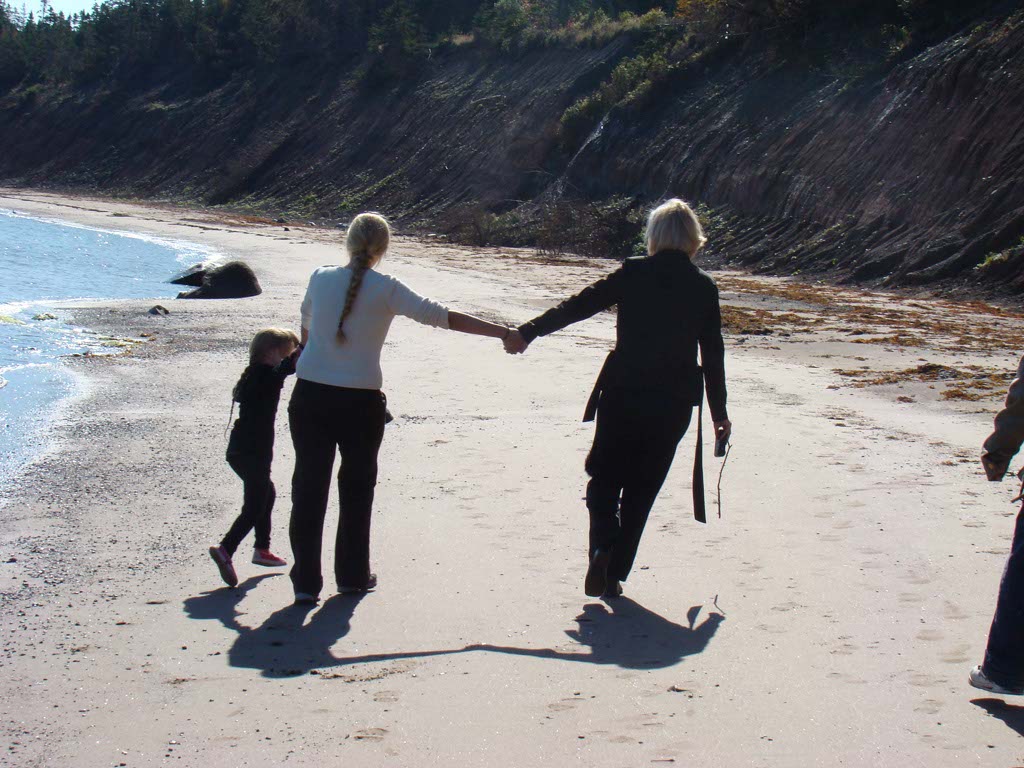 When you have a family of your own, it’s only natural to desire family health and wellness in every way possible. This might seem overw...
END_OF_DOCUMENT_TOKEN_TO_BE_REPLACED 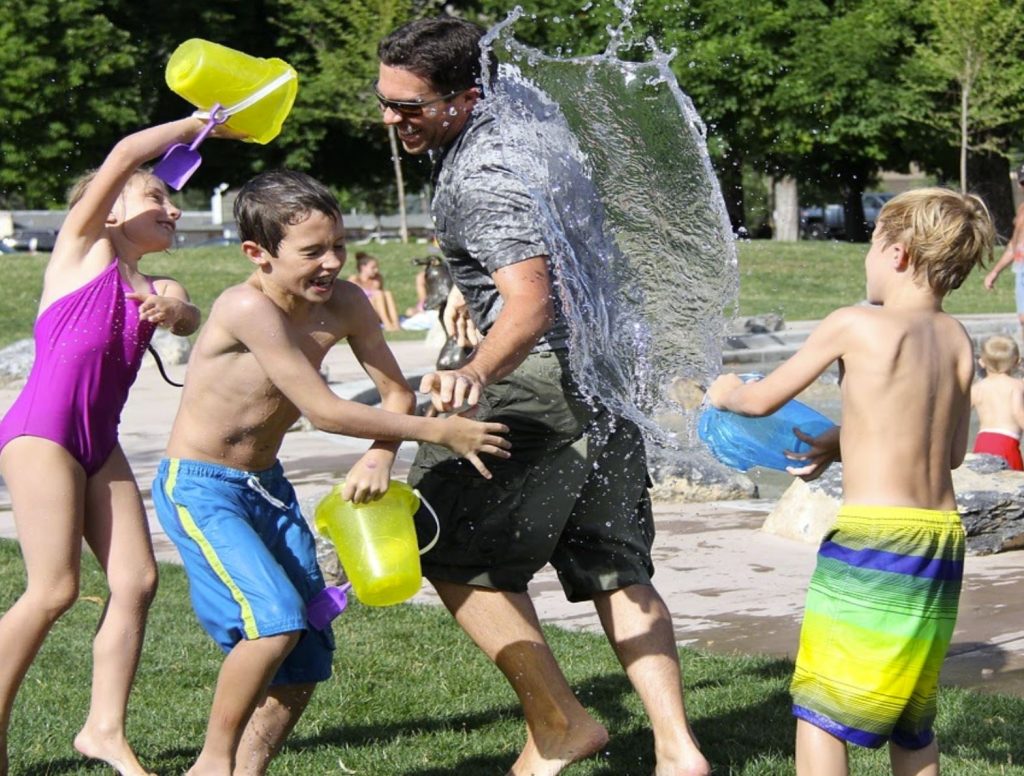 Raising a family isn’t an easy task. For most people, having a family is almost like having a second job (but with much more responsibi...
END_OF_DOCUMENT_TOKEN_TO_BE_REPLACED

Traveling to Colombia soon? Excellent choice. You’ll not regret this one. But let me give you a little sneak peek of what Colombia is a...
END_OF_DOCUMENT_TOKEN_TO_BE_REPLACED