Every year, my bucket list gets more and more unrealistic; it has to since I’ve already been able to cross off such adventures as flying a 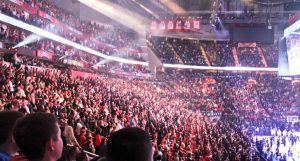 jet pack, swimming with whale sharks, and traveling to 35 countries. Last year’s focus was aerial feats such as aerobatics in a biplane, piloting a helicopter, and skydiving (again). This year I wanted to have a focus, but it had to be new and push the limits; after all, what’s the point of a bucket list? I found a company called QuintEvents and they were the answer to my huge bucket list dreams for 2013.

Sports have influenced my life since I was a child. I played basketball, volleyball, and baseball from the age of 3. Then, as a young adult, I started coaching basketball, volleyball, soccer, field hockey, and even dragon boat racing. I’m surprised it took me this long to include sporting events on my yearly list, but this year they’ve found their place in a big way. QuintEvents are the experts for creating sports and entertainment experience packages that will be remembered for a lifetime. They are the only event company with Official Relationships with 6 of the world’s most prestigious event organizers! Rather than just attending an NBA game, I included a QuintEvents package on my list. They did NBA All-Star 2013 in true bucket list style and I’m already dreaming about my next QuintEvents experience.

I arrived in Houston, Texas and took a shuttle to the Hilton Houston Plaza. The airport shuttle and dining were the only things not included in my dream QuintEvents package. From accommodations and event transportation to tickets and pre/post game hospitality, it was a truly all-inclusive experience.

When I walked into the hotel, there were signs and employees to direct all guests. It was like they had an employee for everything, one for greeting guests, one for answering questions, one for managing transportation…. There was an immediate air of luxury service. 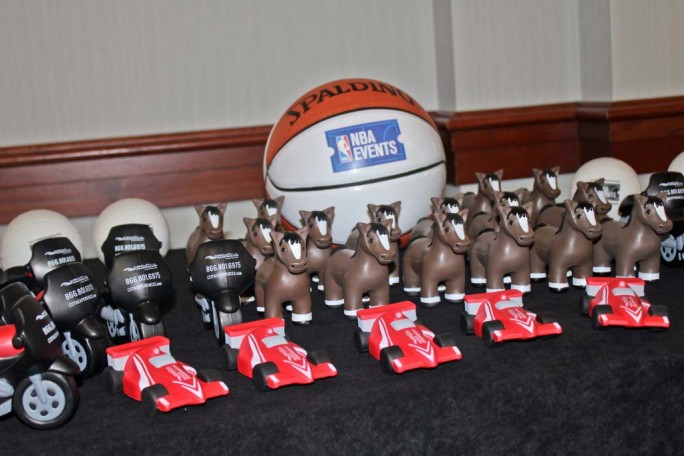 After checking in, I went to the 8th floor of the hotel to pick up my tickets in the hospitality room. The package included tickets to BBVA Rising Stars Challenge, State Farm All-Star Saturday Night, 2013 NBA All-Star Game, Access to the exclusive in-arena game hospitality party venue, NBA Legend Meet & Greets, and Post Game On-Court Experience. I also had a transportation pass that included return service to all of the events. When the events coordinator, Erin, handed me the package, it was better than Christmas. I kept looking at the array of colors and flashy logos. To keep them organized, we were given an NBA lanyard that held all of the tickets perfectly. In the hospitality room, there were two treat tables: basketballs and other sporting nick-nacks filled one table, snacks and sodas on another. I was right; QuintEvents thought of everything! 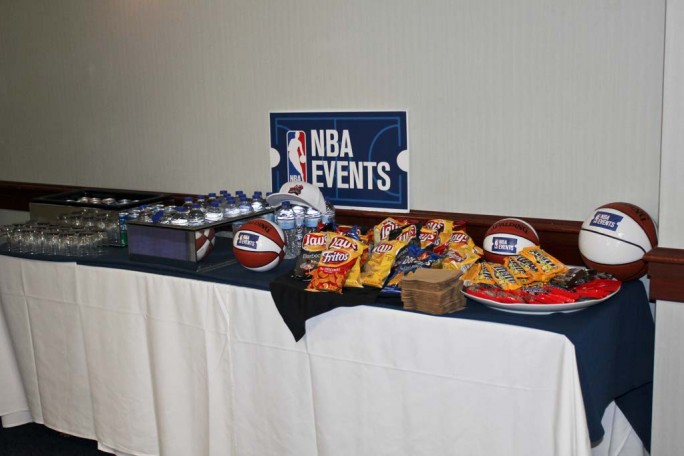 It was already 3pm and I was getting on the shuttle at 5pm so I returned to my room to prepare for the evening. The room was beautiful; it had a sitting area, a desk, two bathrooms, and a king-sized bed. On the 17th floor, I had a great view of downtown. 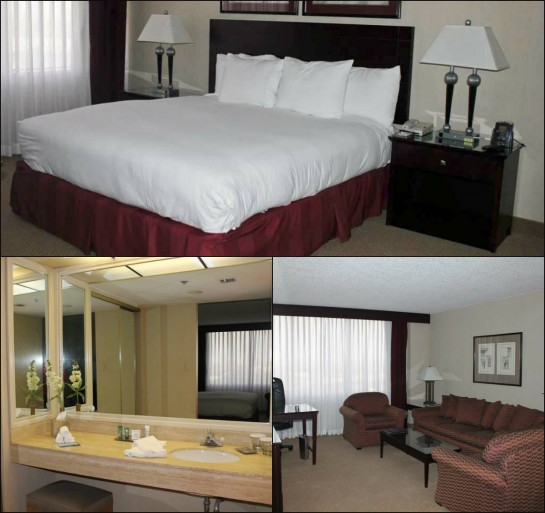 I was nervous about going to the events on my own. I didn’t know anyone so I thought that I might not enjoy the experience as much, but as soon as I sat down in the lobby of the hotel I met other QuintEvents package holders who were also waiting for the shuttle. We automatically had something in common – a love of basketball.

Excited and anxious, I chatted with a mother and son who were also going to the BBVA Rising Stars Challenge. We were instantly connected and conversation flowed easily. Actually, everyone there talked like we were old friends. Being part of QuintEvents held a unique dynamic. We were passionate, excited children all over again and making friends was just as easy as it was when I was five years old. I hadn’t felt that way since I was a child. Who would have thought that waiting for the shuttle would be one of the best parts of the weekend? 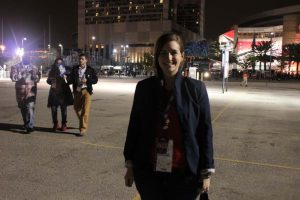 The shuttle picked us up at the door of the hotel and dropped us off onsite. A transportation coordinator held a NBA sign and led us to the door of the Toyota Center and QuintEvents employees were waiting for us outside the door after the game. I never felt lost or concerned at any point. Even though I was traveling without my family, I never felt alone.

On Saturday, everything ran equally smooth. QuintEvents employees tended to our every need and the transportation flowed like clockwork.

It wasn’t until Sunday that I went to the Jam Session held at the George R. Brown Convention Center. The Jam Session was a 500,000-square foot transformation of the  convention center paying homage to the game of basketball. Once again, QuintEvents covered every detail to make ticket holders feel welcomed and safe. There were hourly drop-offs and pick-ups outside the convention center and if you were unsure of the bus schedule, it could be found on a sign outside the door. Employees didn’t just wait on the bus for you to get on and off. They greeted us in style, waiting with a friendly smile at every door.

During the pre-game exclusive in-arena game hospitality party, I noticed QuintEvents employees circulating around the room tending to the excited ticket holders. There were bar tenders, servers, and QuintEvents employees making sure no one sat alone, no one needed anything, and everyone was having the bucket list experienced they imagined. 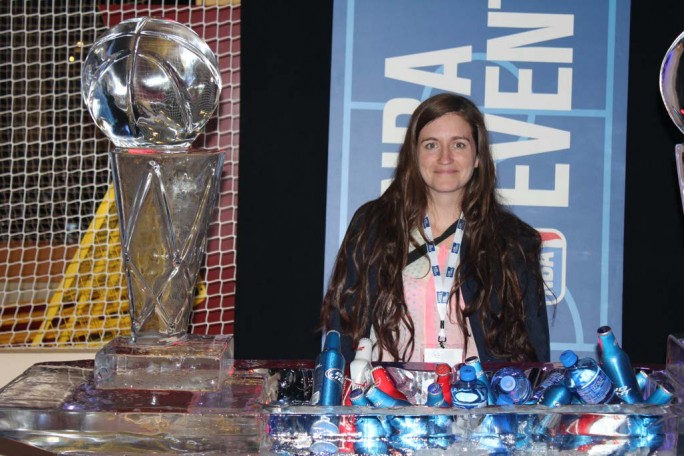 The final event of the weekend was the Post Game On-Court Experience. Erin led us onto the court for a photo opportunity. I was so overwhelmed that I tripped over a cord when walking onto the court. This was a dream come true. I had envisioned standing on a professional basketball court since I was 3 years old, since I looked up to my brother and imagined dunking over his head with one second left on the clock. I was making my bucket list dreams a reality.

I could never have dreamed of such an elaborate NBA package. I didn’t even know that the on-court experience was possible. I didn’t think that regular people, like me, could attend the pre-game exclusive in-arena game hospitality party. QuintEvents don’t just offer sporting event packages; they offer dreams. Using their unique partnership with the NBA, they turned an NBA event into a bucket list experience.

Our San Antonio bucket list was super easy to create. There are so many unique bucket list experiences that we keep going back for more...
END_OF_DOCUMENT_TOKEN_TO_BE_REPLACED

Did you know that Houston is America's fourth-largest city? I really had no idea until my recent visit. The loop that goes around the c...
END_OF_DOCUMENT_TOKEN_TO_BE_REPLACED

Last year, Athena spent her birthday at home with us. We couldn't have friends over to celebrate and we could only get her things that ...
END_OF_DOCUMENT_TOKEN_TO_BE_REPLACED

What cities are on your travel bucket list for 2021? When we think of travel, we think of climbing hills to watch the sunrise, cocktail...
END_OF_DOCUMENT_TOKEN_TO_BE_REPLACED

Grandscape will be one of the largest and most unique mixed-use real estate developments in the country upon completion. Located in the...
END_OF_DOCUMENT_TOKEN_TO_BE_REPLACED

I've driven every type of vehicle that I can. I have experience with stock cars, Formula One, super cars, and Indy cars. I've driven mo...
END_OF_DOCUMENT_TOKEN_TO_BE_REPLACED

Traveling to Colombia soon? Excellent choice. You’ll not regret this one. But let me give you a little sneak peek of what Colombia is a...
END_OF_DOCUMENT_TOKEN_TO_BE_REPLACED

Fun, mysterious, and extremely beautiful, Cuba is a country that should be on the bucket list of every global traveler. The small islan...
END_OF_DOCUMENT_TOKEN_TO_BE_REPLACED

It’s hard to imagine that bustling Plano was once a small farming community. Now a vibrant city of family-fun and entertainment it's an...
END_OF_DOCUMENT_TOKEN_TO_BE_REPLACED

Are you about to embark on your first trip to Europe? There's so much to see and do that European travel is a life-long endeavor. Even ...
END_OF_DOCUMENT_TOKEN_TO_BE_REPLACED

The State Fair of Texas is held each fall at Dallas Fair Park. The Fair has taken place every year since 1886 and it usually begins the...
END_OF_DOCUMENT_TOKEN_TO_BE_REPLACED