Before our trip to Arizona, I did the usual thing that many travelers do – research where to stay, eat and what there was to see and do.  Of all the activities listed, the one that stood out for me was hot air balloon rides.  I just had to do it!  After several calls, I decided to go with this one company – 2Fly Us Hot Air Balloon Rides  – located in Phoenix, Arizona owned and operated by a Kevin Flanagan.  I called and had the pleasure of speaking with Kevin himself; it was a great conversation.  Besides his cheerful demeanor, what cinched the deal was the fact that I was talking with who would be our pilot and that he only flew up to four passengers at a time; not a larger group like some of the other companies I had spoken with.  The reservation was made and all that was left was to wait for the day to arrive.

With every flight scheduled, you call him the evening before to confirm your flight and that the weather won’t throw a monkey wrench in things – which is what it almost did for us.  They were forecasting rain – of all things – to come in on the day of our scheduled flight.  We were called and offered a ride the day before our booked time as they had an opening,  just in case the weather report was accurate.  We couldn’t as plans had already been made so it was left to see what nature would do.  So I called the night before to check our flight status and there was  good news.  The rain had moved and our scheduled flight was a go!

You meet up with Kevin and his assistant at a designated pick up point for your flight (easy to find and get to even if you aren’t quite sure where things are), safely leave your vehicle on the parking lot there, then it’s off to the appointed launch site of the day.  The launch sites change according to which way the winds are blowing so one persons ride can be different from another.  The pick up site is a donut shop which  is used by several balloon companies.  It also provides you with a place to get a snack and coffee if you wish beforehand as well as a chance to make a “pit stop” if necessary because in the desert there are no – ahem – places to go.

He knew we were the clients he was picking up for that day because as he pulled up with his van and trailer I started hopping up and down clapping in the parking lot.  I guess I was a bit excited about going for the ride.  2Fly Us offers sunrise and sunset flights but the sunset flights are only offered during the cooler months.  As May is a hot month, ours was a sunrise flight which meant being at the pickup point at 5:15 in the morning.  Very early but so worth it!

We drove off to a launch site as Kevin explained  how the flight path was determined by the wind currents (there is actually an app for that; who knew!) and a bit of the history of ballooning.  It all started with paper bags and villagers with pitchforks going after one of the earliest balloonists.  Great story but I will let him tell it to you.  At the launch site we watched as several of the companies flying that day got out of their respective vans and into a huddle; I suppose discussing air currents and what not.  It was funny to watch as there was this group of men all talking together, then looking up at the sky, and then back to talking again.  They did this a few times, broke the huddle and everyone got back into their vehicles and drove off.  Apparently that first launch site wasn’t a viable one.

This happened one more time before we settled on a spot.  They brought out the balloon from their trailer, unfurled it on the ground, and proceeded to inflate it with a large fan and burner as they assembled and attached the basket to it.  When the balloon was upright it was our time to climb in.  The balloon expanded further for eventual lift off from the burners firing occasionally producing the hot air – or hot hair as it was called.  You will feel some warmth on the top of your head when they fire but it doesn’t hurt at all.  And then we slowly and gently lifted off and rose into the sky.  That was a wonderful thing until we reached I don’t know how many thousands of feet into the air when it suddenly hit me that I was floating high in the air in a big basket.  I clung to it tightly trying not to shake. 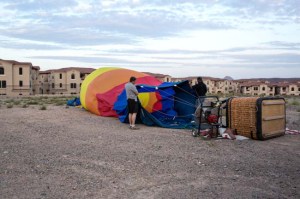 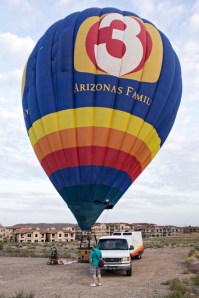 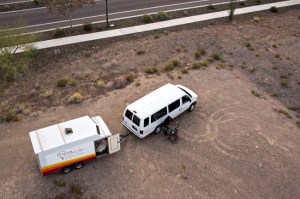 Kevin was our tour guide telling us what was what below us and that we could look off into the distance to see the other balloons that were still inflating or were now up in the air like us.  Somewhere around this time in our flight my mind was beginning to have Wile E. Coyote cartoon thoughts  “Don’t look down and you won’t fall down!”  Silly I know; being that high up in the air just did it to me.  But when I turned around to see the sun coming up from behind the mountains I lost my fear and was just in awe of that spectacular moment.

When you are that high up in the air it is a really peaceful sensation and a bit chilly.  The air temperatures changed depending on how high or low we were which I would never have guessed but scientifically speaking it makes sense.   It was so still and calm I asked were we even moving or just hovering in place.  Indeed we were moving but you really don’t feel it.  It really is an amazing sensation to be up in the air like that; words cannot fully describe it.

As we dropped down to a lower altitude, Kevin told us about the history of the area and what types of cacti there were below us.  Beware the jumping cholla; that cactus is mean!  We floated over some jackrabbits with their tall ears up running away and some cattle grazing on what little there was to graze on.   I was even able to see the blooming flowers on the top of some very tall saguaro cactus.  By the time I was so comfortable that I was leaning over the edge of the basket to take my photos.  There was no danger in any of this and I was just totally thrilled.

But then it was time to come in for our landing and I was disappointed.  “Is it over already?” I asked forlornly.  We had been on our ride for over an hour but it did not feel that way at all.  Time really did fly.  The landing is interesting and this was about the only time I was really aware of how quickly we were moving.  There are guys on the ground who will  grab a side of the basket as you come in for your landing.  Hold on tight because the basket might end up on it’s side.  We did, but as long as you hold on to the straps in the basket it doesn’t feel that much different than hitting a few speed bumps in your vehicle.  I popped out with a big smile on my face shouting “That was so cool!”

As our balloon was being quickly and efficiently packed away, we watched the other balloons that had taken off the same morning come in for their landings.   To celebrate our flight we were then served mimosas and mini muffins as we did a toast to the sky as Kevin recited a balloonist creed.  We were now part of the club.  You pay for your ride and then its back to the donut shop with the rest of your day still ahead to do other things.  It was only a bit after 8 in the morning; the entire process from start to finish taking around 3 hours.

I would go flying again with 2Fly Us in a heartbeat.  If you are ever in the Phoenix area and you have that itch to do something out of the ordinary, this is it.  Next time we’re going to try the sunset flight.

By: Images by TDashfield

Our San Antonio bucket list was super easy to create. There are so many unique bucket list experiences that we keep going back for more...
END_OF_DOCUMENT_TOKEN_TO_BE_REPLACED

Did you know that Houston is America's fourth-largest city? I really had no idea until my recent visit. The loop that goes around the c...
END_OF_DOCUMENT_TOKEN_TO_BE_REPLACED

Last year, Athena spent her birthday at home with us. We couldn't have friends over to celebrate and we could only get her things that ...
END_OF_DOCUMENT_TOKEN_TO_BE_REPLACED

What cities are on your travel bucket list for 2021? When we think of travel, we think of climbing hills to watch the sunrise, cocktail...
END_OF_DOCUMENT_TOKEN_TO_BE_REPLACED

Grandscape will be one of the largest and most unique mixed-use real estate developments in the country upon completion. Located in the...
END_OF_DOCUMENT_TOKEN_TO_BE_REPLACED

I've driven every type of vehicle that I can. I have experience with stock cars, Formula One, super cars, and Indy cars. I've driven mo...
END_OF_DOCUMENT_TOKEN_TO_BE_REPLACED

Traveling to Colombia soon? Excellent choice. You’ll not regret this one. But let me give you a little sneak peek of what Colombia is a...
END_OF_DOCUMENT_TOKEN_TO_BE_REPLACED

Fun, mysterious, and extremely beautiful, Cuba is a country that should be on the bucket list of every global traveler. The small islan...
END_OF_DOCUMENT_TOKEN_TO_BE_REPLACED

It’s hard to imagine that bustling Plano was once a small farming community. Now a vibrant city of family-fun and entertainment it's an...
END_OF_DOCUMENT_TOKEN_TO_BE_REPLACED

Are you about to embark on your first trip to Europe? There's so much to see and do that European travel is a life-long endeavor. Even ...
END_OF_DOCUMENT_TOKEN_TO_BE_REPLACED

The State Fair of Texas is held each fall at Dallas Fair Park. The Fair has taken place every year since 1886 and it usually begins the...
END_OF_DOCUMENT_TOKEN_TO_BE_REPLACED

4 thoughts on “Hot Air Balloon Riding with 2Fly Us”