Come along with me to experience Hope in Haiti. It’s a journey worth taking.

“Ca marche.” This became the slogan of our week-long trip to Haiti this May. In English it roughly translates to “it goes” or “it works.” I know this isn’t the first thing that comes to mind when you think about Haiti. In the American news we hear about the devastation, the poverty, and the crumbling infrastructure of this island off the coast of Miami (all of which is very true). But we rarely hear about the small victories of individuals or places like the orphanage we visited, Proje Espwa (Project Hope). 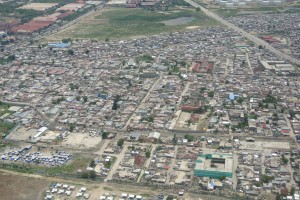 We flew into Haiti on my 21st birthday. While so many kids in America spend this birthday at a bar with friends, drinking so much they won’t remember a second of it the next day, I will never forget a moment of mine. Flying over the tent homes and tin houses of Port-au-Prince, to the rolling mountains and agricultural fields of eastern Haiti we touched down in Les Cayes in the late afternoon.
After settling into the guest house, we were given a tour of the facilities. Proje Espwa is essentially an orphanage and school system. They provide housing for children whose parents have been killed or have abandoned them. And although many of the kids there are orphans, there are many whose families simply cannot support them and they walk to Espwa from town every day–upwards of 3 miles along gravel bare-footed. Today they serve over 600 kids.
On the first day we walked into the boy’s village–where the younger boys live and play in the afternoons. As soon as we walked through the gates, kids grabbed onto our hands and pulled us toward their houses. “What is your name?” they asked. The only phrase that many of them knew in English. 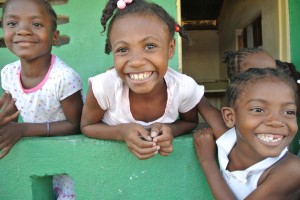 At the only girl’s house in the boys village, they took hold of our cameras and started taking pictures of the world around them. One of the girls pointed to a hair clip on my camera bag, so I carefully removed it and clipped the sparkly pink clip into her hair. She smiled and jumped into my arms. Before I knew it, there I was, holding a toddler in my arms as the rest of the kids sang happy birthday to me in French and English. There’s no way I will forget that moment.Walking out of the village, the boys were playing soccer with a blown up plastic glove without shoes. “Ca marche.” They smiled and laughed and had fun like kids do with what they had.

The next day we visited the girls’ houses outside of the boys village. A couple of the girls led me into their house. “Vous aimez danser?” I asked in broken French. Dance, after all, is the language I speak most fluently. Without answering they began dancing and teaching me Haitian dance steps. “Ballet?” they asked back. I taught them plies, tendus and passes as we took our little dance party outside to the domes being constructed for them to live in some day in their near future. Dancing amidst bags of sand, rebar, inside the partially constructed domes. “Ca marche.” 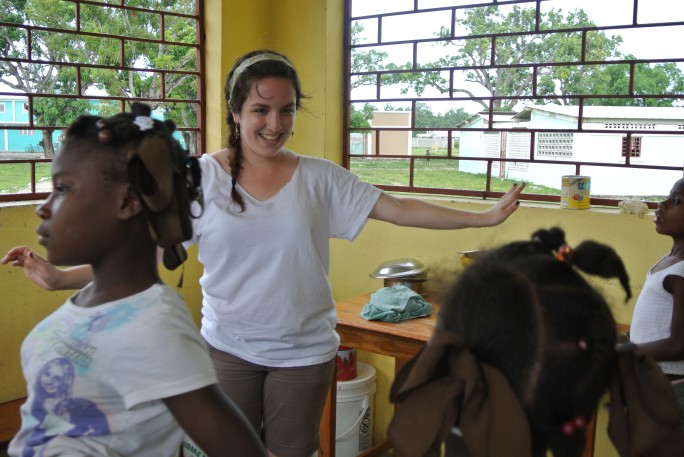 I spent the week mostly inside the medical clinic inventorying supplies sent to them by IMEC. The clinic at the orphanage serves not only the children but people from the outside communities, so I know the hundreds of needles, urine collectors, and catheter trays will go to good use. In our free time we would venture out to them kid’s home and play with parachutes, water balloons, and, of course dance. 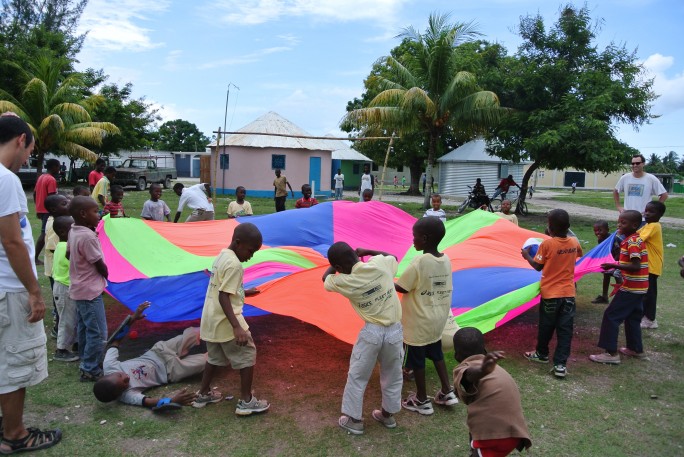 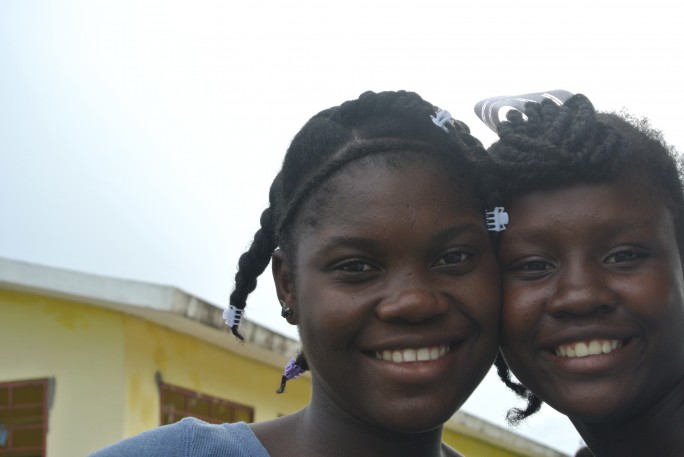 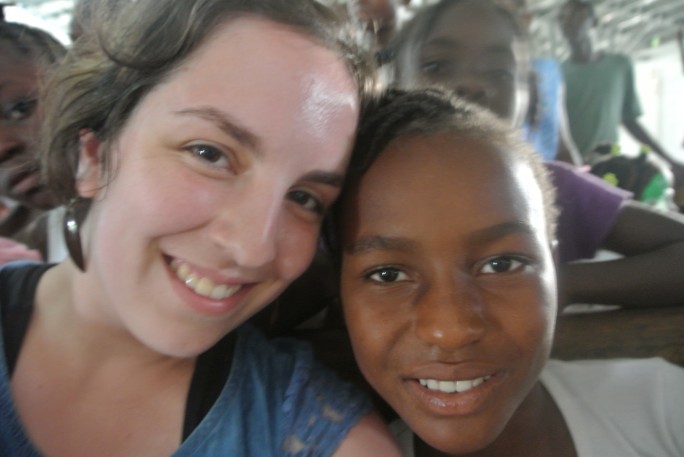 That’s the thing about Haiti. Yes, they are poorly off. Yes, most Haitians live in terrible conditions without the basic necessities. But, from what I saw, their lives are intertwined with art. They all sing and dance. Music is everywhere. I would wake up every morning to the sound of kids singing and during the day they would ask us to sing songs to them. They didn’t understand when group members said they didn’t sing. In Haiti, everyone sings. And the paintings… some of the kids at the orphanage paint or draw in their free time. Art is everywhere.

So even though things are bad, “ca marche.”

Many of the kids haven’t had much affection from their families and they’ve seen more pain in their short lives than I will probably ever see. That’s why I think they are so affectionate with us as visitors and we are happy to give them whatever love we can for that one short week. And I did come to love those kids. I’ve been home for three days now and every night I’ve dreamed of them. I know it’s too soon to say, but I promise myself I will never forget them and will go back someday soon to visit because there’s so much more they have yet to teach me.

According to a CNBC report, there is a new “sense of urgency” in travel after the COVID-19 pandemic. The survey of 12,000 travelers fro...
END_OF_DOCUMENT_TOKEN_TO_BE_REPLACED

Many people working in diverse industries usually partake in business travel since it’s essential for them to interact with colleagues,...
END_OF_DOCUMENT_TOKEN_TO_BE_REPLACED

Weekend getaways should be the easiest of all to pack for, right? After all, you know where you're going, what you'll be doing, and wha...
END_OF_DOCUMENT_TOKEN_TO_BE_REPLACED

Our San Antonio bucket list was super easy to create. There are so many unique bucket list experiences that we keep going back for more...
END_OF_DOCUMENT_TOKEN_TO_BE_REPLACED

On a recent Royal Caribbean cruise, I encountered countless parallels between game development and travel activities and professions. F...
END_OF_DOCUMENT_TOKEN_TO_BE_REPLACED

Recently, Saudi Arabia restored direct flights to Thailand after 32 years. Do you know the history behind the cold relationship between...
END_OF_DOCUMENT_TOKEN_TO_BE_REPLACED

The Palm Beaches are perfect for family travel. Whether you're interested in the beach as a natural playground or exploring the more wi...
END_OF_DOCUMENT_TOKEN_TO_BE_REPLACED

Did you know that Houston is America's fourth-largest city? I really had no idea until my recent visit. The loop that goes around the c...
END_OF_DOCUMENT_TOKEN_TO_BE_REPLACED

Flower tourism comes alive during the spring and summer. With so many different kinds of wild flora, it’s difficult to decide where bes...
END_OF_DOCUMENT_TOKEN_TO_BE_REPLACED

It’s easier than ever to take amazing photos of your travels so you always have those memories. Your phone is a high-quality camera, so...
END_OF_DOCUMENT_TOKEN_TO_BE_REPLACED

Last year, Athena spent her birthday at home with us. We couldn't have friends over to celebrate and we could only get her things that ...
END_OF_DOCUMENT_TOKEN_TO_BE_REPLACED

What cities are on your travel bucket list for 2021? When we think of travel, we think of climbing hills to watch the sunrise, cocktail...
END_OF_DOCUMENT_TOKEN_TO_BE_REPLACED

5 thoughts on “Hope in Haiti: Lessons from Children”