Telling about Plitvička Lakes National Park in Croatia is sort of like telling of one’s experience visiting the Grand Canyon in the United States.  It is a place well known for its unique geological formations and natural beauty.  And yet, why not share the story, because in both cases it is worthy of being shared again and again given the beauty of the place and because there is no other place on earth quite like it. 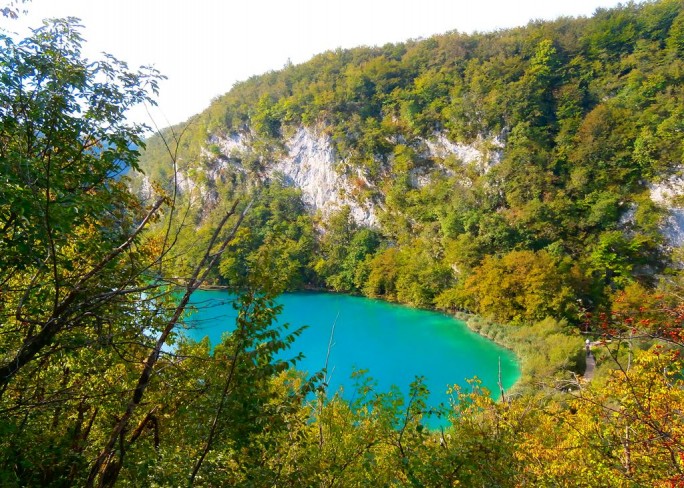 The lowest of the Plitvicka Lakes is seen first as you enter the national park’s east entrance. 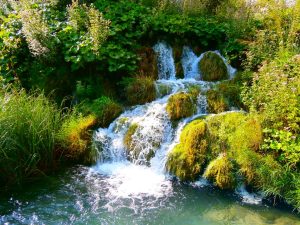 What constitutes a waterfall is a matter for speculation.

Although there are streams that empty into the Plitvicka Lakes, their primary source originates from underground springs.  The string of sixteen successive lakes is like a giant necklace of turquoise jewels strung together with a series of waterfalls.  Visitors often ask the obvious question, ‘How many waterfalls are there?’  The answer is, of course nobody knows, partly because the definition of how much water constitutes a waterfall is a matter of speculation.  Also, the water level changes with the seasons, and there are more waterfalls during the high water months.  The underground aquifer feeding the lakes increases in volume with the spring thaw and seasonal rainfall. 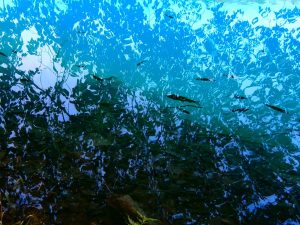 Fish swim alongside our path as we stroll by.

Schools of trout follow along as we walk the pathways bordering the lakes.  I imagine that a number of tourists have fed bread crumbs to the fish over time so that they are now naturally attracted to the movement of people.  That may be the only thing added to the water which maintains an amazing purity that makes it possible to see to the bottom of the lakes.  The government of Croatia has recognized the importance of the natural beauty of the area and has protected it as a national park since 1949. 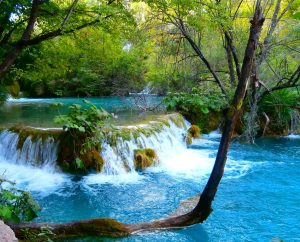 Calcium deposits perpetually change the shape of the lakes and falls.

The springs feeding the lakes contain calcium carbonate.  The calcium solidifies over time to create the rock formations that have given the lakes their unique shapes.  While this calcification typically produces rock at the rate of a few millimeters per year at locations around the world, at Plitvicka the rate of rock formation is 30-50 times that rate.  Scientists have not been able to fully explain this rapid rock formation.  It is a phenomenon exclusive to this one place in Croatia, which contributed to Plitvicka Lakes being designated a UNESCO World Heritage Natural Site.

Other features of the park are worth noting.  The highest falls in Croatia can be viewed as one enters the east entrance to the park.  Veliki-Slap Falls are nearly 300 feet tall.  Visible from across the canyon atop the falls is a wood cabin, the remnants of the last watermill in the area used by settlers to grind their wheat and corn.  There are also campgrounds, motels and a luxury hotel near the park to provide a vacation experience for any budget.  The entry fee to the park is 110 kuna, about $19.00. 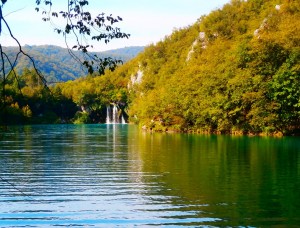 Colors change with every season providing tourists with ever-changing scenery.

Given the amenities, the beauty and the affordability, a visit to Plitvicka Lakes is too good to pass up.  When you take into account the warmth of the people, the great food, the enjoyment of wine country in the north and the Dalmatian Coast to the west and you can see the country beckons with open arms for you discover Croatia for yourself.

Many people working in diverse industries usually partake in business travel since it’s essential for them to interact with colleagues,...
END_OF_DOCUMENT_TOKEN_TO_BE_REPLACED

Weekend getaways should be the easiest of all to pack for, right? After all, you know where you're going, what you'll be doing, and wha...
END_OF_DOCUMENT_TOKEN_TO_BE_REPLACED

On a recent Royal Caribbean cruise, I encountered countless parallels between game development and travel activities and professions. F...
END_OF_DOCUMENT_TOKEN_TO_BE_REPLACED

Recently, Saudi Arabia restored direct flights to Thailand after 32 years. Do you know the history behind the cold relationship between...
END_OF_DOCUMENT_TOKEN_TO_BE_REPLACED

The Palm Beaches are perfect for family travel. Whether you're interested in the beach as a natural playground or exploring the more wi...
END_OF_DOCUMENT_TOKEN_TO_BE_REPLACED

Flower tourism comes alive during the spring and summer. With so many different kinds of wild flora, it’s difficult to decide where bes...
END_OF_DOCUMENT_TOKEN_TO_BE_REPLACED

It’s easier than ever to take amazing photos of your travels so you always have those memories. Your phone is a high-quality camera, so...
END_OF_DOCUMENT_TOKEN_TO_BE_REPLACED

Last year, Athena spent her birthday at home with us. We couldn't have friends over to celebrate and we could only get her things that ...
END_OF_DOCUMENT_TOKEN_TO_BE_REPLACED

What cities are on your travel bucket list for 2021? When we think of travel, we think of climbing hills to watch the sunrise, cocktail...
END_OF_DOCUMENT_TOKEN_TO_BE_REPLACED

Grandscape will be one of the largest and most unique mixed-use real estate developments in the country upon completion. Located in the...
END_OF_DOCUMENT_TOKEN_TO_BE_REPLACED

A digital nomad travels the world and works remotely. With the assistance of technology, nomads use the advancements and opportunities ...
END_OF_DOCUMENT_TOKEN_TO_BE_REPLACED