In Search of the Wild Men, Sumatra, Indonesia

SUMATRA! The  name itself oozes exoticism, yet I knew nothing of the place itself when I arrived on a whim from Malaysia. And I wasn’t disappointed by the rainforest clad island with misty mountain peaks. But the spectacular scenery was just a bonus. What I wanted was a rare, face-to-face bucket list encounter with a wild orangutan. In late 2002, I headed deep into the rainforest…before it was too late. 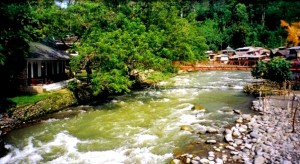 From my base in the village of Bukit Lawang, my guide Sonny and I set off on our 2 night, 3 day search for the wild men, though he warned me that my chances were slim. Of the last six groups he’d guided, Sonny said, none were lucky. Not good odds. But, ‘Never try, never know,’ was his catchphrase, and we pushed on with confidence. His words became my life’s mantra.

The forest terrain was tough going, and intense heat and humidity took their toll. Parrots squawked high above, and unseen monkeys quarreled noisily. Mist swirled round rocks as big as houses, and the scene was real life Jurassic Park. We set camp beside the turbulent river, but come nightfall on Day 1, no wild men.

Late afternoon on Day 2, Sonny ‘ssshh’d’ me with his fingers. My heart raced, and it was an anxious hour before I sensed movement high above. And perhaps, a flash of orange? The anticipation was palpable. And then… 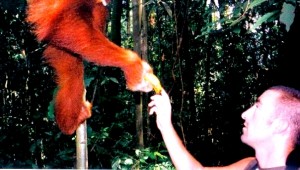 …she emerged into view. Very slowly, about thirty feet away, a large female made her way toward us. Her color was like fire against the forest greens, and I was amazed she’d remained concealed so long and so easily. Sonny’s smile grew wide…he didn’t expect this. He motioned for me to hold out a banana. I did, nervously.  She was just three feet away now…and then I saw the baby. I couldn’t believe my luck.

The mother and I shared a look. I couldn’t know what she was thinking. Fear? Anger? I know we humans are destroying her homeland, killing her species, and all for profit. Orangutans are intelligent, graceful and gentle creatures, and we should respect them; after all, we share 97% of the same DNA. Their habitat is among the most inspiring and important on the planet. Both their future, and ours, depend on it.

She took the banana, and in seconds, they were gone. The entire interaction, from first glimpse to last, spanned just ten minutes. I was searching for a Wild Man…instead I met a not-so-wild woman. It was a wonderful experience, and I was privileged to be there.

What wild animals are on your ‘to see’ bucket list?

Here are a couple of links to here we can LEARN ABOUT and HELP the orangutans of Sumatra.

If you’d like to read more by Steven, check out Twenty First Century Nomad

Our San Antonio bucket list was super easy to create. There are so many unique bucket list experiences that we keep going back for more...
END_OF_DOCUMENT_TOKEN_TO_BE_REPLACED

Last year, Athena spent her birthday at home with us. We couldn't have friends over to celebrate and we could only get her things that ...
END_OF_DOCUMENT_TOKEN_TO_BE_REPLACED

What cities are on your travel bucket list for 2021? When we think of travel, we think of climbing hills to watch the sunrise, cocktail...
END_OF_DOCUMENT_TOKEN_TO_BE_REPLACED

Grandscape will be one of the largest and most unique mixed-use real estate developments in the country upon completion. Located in the...
END_OF_DOCUMENT_TOKEN_TO_BE_REPLACED

I've driven every type of vehicle that I can. I have experience with stock cars, Formula One, super cars, and Indy cars. I've driven mo...
END_OF_DOCUMENT_TOKEN_TO_BE_REPLACED

Traveling to Colombia soon? Excellent choice. You’ll not regret this one. But let me give you a little sneak peek of what Colombia is a...
END_OF_DOCUMENT_TOKEN_TO_BE_REPLACED

Fun, mysterious, and extremely beautiful, Cuba is a country that should be on the bucket list of every global traveler. The small islan...
END_OF_DOCUMENT_TOKEN_TO_BE_REPLACED

The State Fair of Texas is held each fall at Dallas Fair Park. The Fair has taken place every year since 1886 and it usually begins the...
END_OF_DOCUMENT_TOKEN_TO_BE_REPLACED

There are so many activities to choose from for your Mont Tremblant summer bucket list that we came up with an entire list dedicated sp...
END_OF_DOCUMENT_TOKEN_TO_BE_REPLACED

From unique tree-top suites with butlers, to private Marrakech villas, these luxury getaways stand apart for their extraordinary attrib...
END_OF_DOCUMENT_TOKEN_TO_BE_REPLACED

There are few things in the world better than getting the chance to travel. That love of travel lets you explore new places, meet new p...
END_OF_DOCUMENT_TOKEN_TO_BE_REPLACED

4 thoughts on “In Search of the Wild Men, Sumatra, Indonesia”