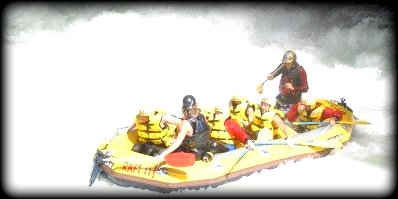 I really have to hand it to my mum Sue and my auntie Pat…they each have a giant pair of cahones. In 2007 we all traveled over to New Zealand for my brother Ian’s wedding. He had lived there many years with his to-be wife Rosh, and we went to celebrate their happy day. Part of the few weeks of fun included a family day out rafting on the mighty Kaituna River, a river which claims to have the world’s highest legally raft-able waterfall. But at a mere 7 meters, it didn’t sound so bad. That is, until your raft approaches the drop. Pausing agonisingly short to allow the raft ahead of you to proceed, but just far enough away so that you can’t see the vertical drop ahead, the pulse races and the heart starts to pound…especially when you hear the screams from the guys in the raft ahead as they plummet out of view. But with  the river raging around you, there is no backing out…and we were next. Down we went…and WHAT A RUSH!!! The 7 meters felt like 70, and as the raft and its terrified occupants, us, disappeared under the falls, I doubt I was the only one who wondered if we’d ever surface again. But surface we did, and I’ll never forget the moment when I high-fived my soon to be 60 year old mother, and she calmly chuckled and said, ‘You were way more scared than I was.” And she was absolutely right, I was more scared than her…but this is the woman who, now almost 65, would still do a parachute jump when I would not. Yep, I’m too scared.

So, the moral of the story? When doing Bucket List activities with pensioner aged family members, pretend you’re a lot braver than actually are.

My family and I had an amazing time road-tripping around New Zealand, especially the day of the rafting on the mighty Kaituna. What great bucket list adventures have you done, or want to do, with your family?

I’d love top read about them in the comments below.