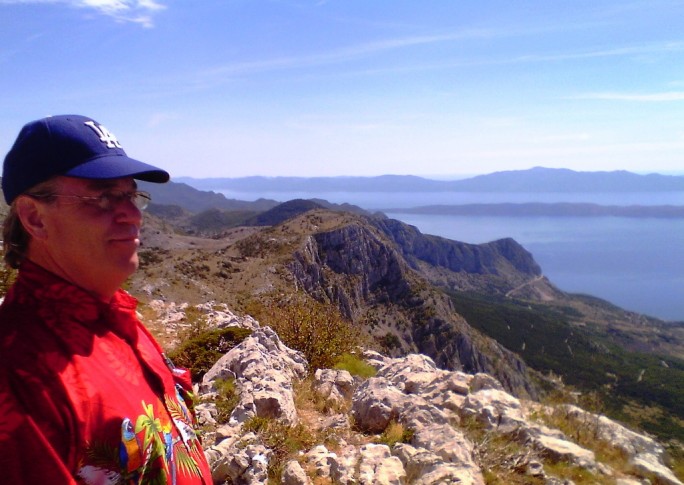 Mike looking over the Adriatic Sea from Biokovo Mountain, Croatia 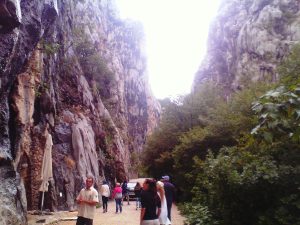 Climbers find routes on both sides of the narrow canyon.

Paklenice National Park is above all a climbers’ paradise near the Dalmatian archipelago island of Pag.  Solid karst rock walls rise 1,000 feet and higher in some areas to form a narrow, deep canyon.  Most routes are numbered and protection anchors are drilled permanently into the rock for clipping in carabiners for climbing ropes.  Small plaques on each pitch label the difficulty rating with a numerical designation.  Some pitches are no more than ten feet away from the next adjacent pitch, and during the Spring and Fall, climbing ropes lay about like spaghetti as climbers take turns climbing various routes.  Colorful names for the routes are given to each pitch, an honor reserved for whoever was credited with the first ascent. 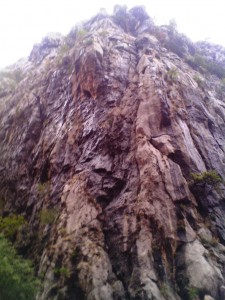 The national park covers 95 km² (23,000 acres) and the terrain which straddles the coastal mountain ridges is an ideal setting for backpackers.  A ranger informs me that camping is only allowed in designated sites where shelters have been built.  Their purpose is primarily to protect surrounding areas undisturbed in their natural state.

A backpacker could hike the high country from one end of the park to the other in a few days.  This would make for an invigorating and rewarding outing and instill the desire to return to one day further explore the park’s hidden treasures. 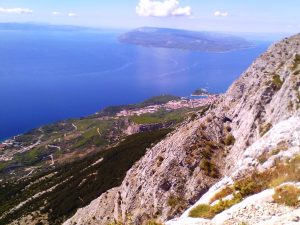 The Dalmatia Coast from a mile high

Biokovo Park is named after the peak that towers over the riviera town of Makarska.  The road to the summit winds up and up, switchback after switchback for 23 kilometers (14 miles).  Our drive climbs 1,700 meters (over 5,500 feet elevation) from the sea to a viewpoint marked by a radio relay tower.  The temperature drops 6°C (11°F) from our seashore point of origin, and a brisk wind reminds me I should have brought a jacket.  Although weather can change rapidly and extreme weather is possible any day of the year, we arrive at the summit on the perfect day. Looking east I can see Bosnia.  To the west I am able to see over the Dalmatian archipelago to the Adriatic Sea and beyond to catch a glimpse of the coast of Italy. 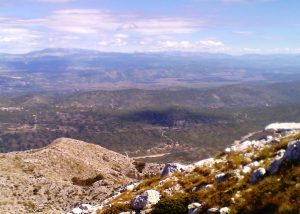 Bosnia in the distance from Biokovo Mountain’s summit

I should warn any prospective visitors who aspire to reach the summit of Biokovo Mountain. The road is adequately maintained.  However, it is a single lane over much of the route, and you will encounter oncoming cars.  Be prepared to find the closest wide spot in which you are able to squeeze past one another.  It may seem challenging, but the view is worth it.  Many tourists rent scooters for the drive, and that is a great solution on a typically warm sunny day.  During our trip I visited seven national parks.

The beauty and diversity of the natural parks of Croatia are stunning.  I look forward to sharing more in my next story.

Weekend getaways should be the easiest of all to pack for, right? After all, you know where you're going, what you'll be doing, and wha...
END_OF_DOCUMENT_TOKEN_TO_BE_REPLACED

Our San Antonio bucket list was super easy to create. There are so many unique bucket list experiences that we keep going back for more...
END_OF_DOCUMENT_TOKEN_TO_BE_REPLACED

On a recent Royal Caribbean cruise, I encountered countless parallels between game development and travel activities and professions. F...
END_OF_DOCUMENT_TOKEN_TO_BE_REPLACED

Recently, Saudi Arabia restored direct flights to Thailand after 32 years. Do you know the history behind the cold relationship between...
END_OF_DOCUMENT_TOKEN_TO_BE_REPLACED

The Palm Beaches are perfect for family travel. Whether you're interested in the beach as a natural playground or exploring the more wi...
END_OF_DOCUMENT_TOKEN_TO_BE_REPLACED

Flower tourism comes alive during the spring and summer. With so many different kinds of wild flora, it’s difficult to decide where bes...
END_OF_DOCUMENT_TOKEN_TO_BE_REPLACED

It’s easier than ever to take amazing photos of your travels so you always have those memories. Your phone is a high-quality camera, so...
END_OF_DOCUMENT_TOKEN_TO_BE_REPLACED

What cities are on your travel bucket list for 2021? When we think of travel, we think of climbing hills to watch the sunrise, cocktail...
END_OF_DOCUMENT_TOKEN_TO_BE_REPLACED

A digital nomad travels the world and works remotely. With the assistance of technology, nomads use the advancements and opportunities ...
END_OF_DOCUMENT_TOKEN_TO_BE_REPLACED

There are some trips where an extra large duffel bag is simply the best luggage option. You might be planning a mountain climbing exped...
END_OF_DOCUMENT_TOKEN_TO_BE_REPLACED

Fun, mysterious, and extremely beautiful, Cuba is a country that should be on the bucket list of every global traveler. The small islan...
END_OF_DOCUMENT_TOKEN_TO_BE_REPLACED

It’s hard to imagine that bustling Plano was once a small farming community. Now a vibrant city of family-fun and entertainment it's an...
END_OF_DOCUMENT_TOKEN_TO_BE_REPLACED