Travel at Home: Neighbourhoods of Geneva

In the past, if you’d asked me to describe what travelling was, I would have said something about going on holiday to foreign lands I’ve never visited before. Something exotic or distinctly different, whether in language, culture or landscape. But the curiosity and increased attention to detail I’ve developed through travel photography has made me change the way I think about travel. You don’t have to leave your home town to travel. I truly believe that travelling is a mindset, more about the way you explore, interact with and see the environment you’re in and less about being away from home. If you’re curious about the place you’re in, learning new things and looking at everything with fresh eyes then you’re travelling. Sure being in a foreign country may make it a bit more exciting, but it’s not a requirement. With this in mind I’ve been making more of an effort to get out and see Geneva. Just me and my camera, I’ve spent time in each of three neighbourhoods that best represent what it has to offer from an architectural perspective. 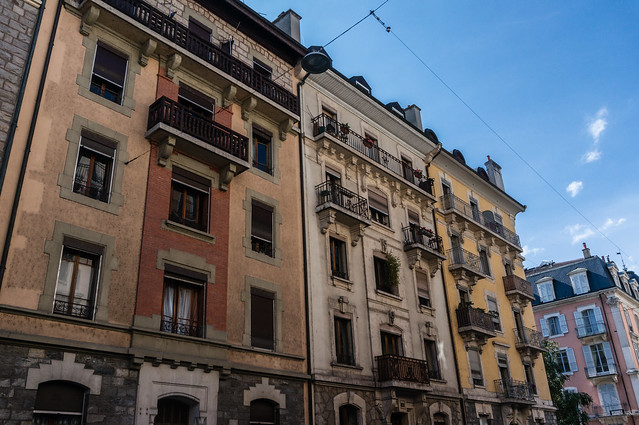 My local neighbourhood in Geneva, Eaux-Vives definitely has a distinct character. Situated right on the eastern shore of Lake Geneva, its lakeside location is unarguably its greatest attribute. But look a little deeper and you’ll find a wide variety of architectural styles in the area with some fantastic colours and interesting facades. 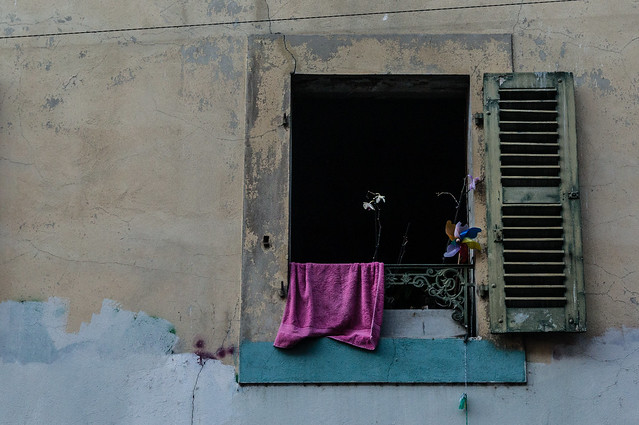 Part of the appeal is that wandering its streets you’re never quite sure what you’re going to find around the corner. A great example is this worn and unkept building that’s been adopted by the homeless. It certainly makes a great subject for photos! 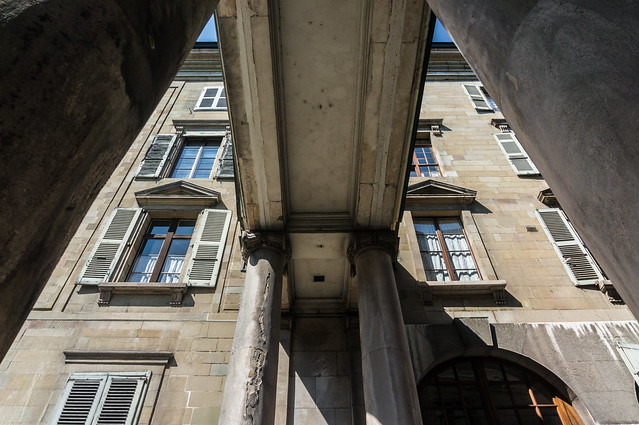 The old town (Vieille Ville) is undoubtedly the most picturesque (and expensive) neighbourhood of Geneva. Many would say its highlight is the Cathedral of Saint Pierre, but for me its real, simple pleasure lies in the beautiful stonework that shines brightly in the sunlight. 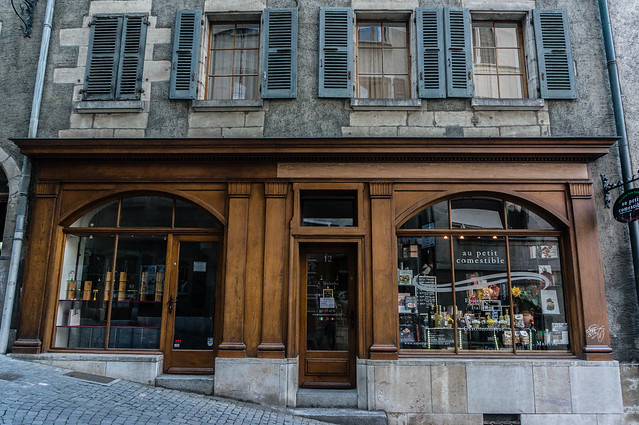 Situated atop a steep hill it is an effort to reach. But with charming narrow streets and architecture strongly influenced by its French roots, it rewards you with what for me is the best old town in Switzerland. 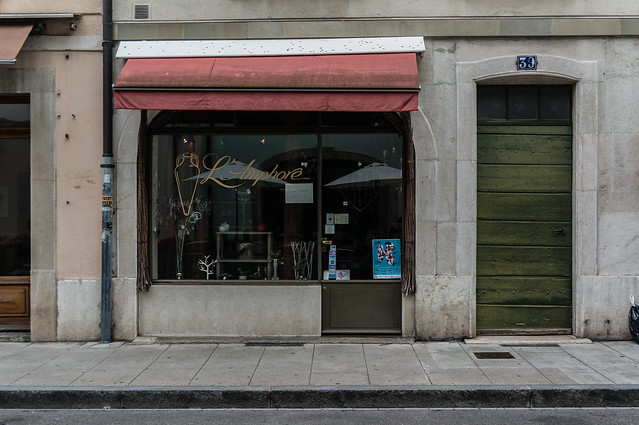 Just a ten minute tram from the centre of Geneva, the area of Carouge feels like a world away. Everywhere you look there are cafes, art galleries and after nightfall some of the best small-scale drinking spots you’re likely to find. 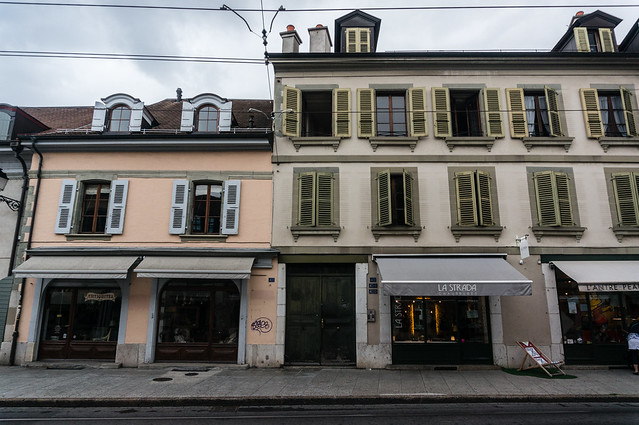 It almost feels like a town of its own, with the influence of its Italian architects evident around every corner. The three-storey block houses, many with quaint internal gardens, are a very different proposition to the taller less uniform buildings in central Geneva.

I would strongly encourage everybody to try and look at travelling in this way. By taking a fresh approach to where you live you’ll be surprised what you find, things you’ve never noticed before. Not only that, it will also alleviate the incorrect assumption that to travel you must go abroad. I’ve certainly found myself much happier in my home environment by taking this approach, thinking about Geneva as a place to explore and discover rather than just somewhere to live.

About the author: Flights booked. Camera packed. Satisfaction guaranteed. Ben is a British expat currently living in Geneva, Switzerland. He works full time as a software developer, but his full time passion is exploring our incredible planet and inspiring others to do the same through his photography. To find out more visit Flights. Camera. Satisfaction.

Our San Antonio bucket list was super easy to create. There are so many unique bucket list experiences that we keep going back for more...
END_OF_DOCUMENT_TOKEN_TO_BE_REPLACED

Did you know that Houston is America's fourth-largest city? I really had no idea until my recent visit. The loop that goes around the c...
END_OF_DOCUMENT_TOKEN_TO_BE_REPLACED

Last year, Athena spent her birthday at home with us. We couldn't have friends over to celebrate and we could only get her things that ...
END_OF_DOCUMENT_TOKEN_TO_BE_REPLACED

What cities are on your travel bucket list for 2021? When we think of travel, we think of climbing hills to watch the sunrise, cocktail...
END_OF_DOCUMENT_TOKEN_TO_BE_REPLACED

Grandscape will be one of the largest and most unique mixed-use real estate developments in the country upon completion. Located in the...
END_OF_DOCUMENT_TOKEN_TO_BE_REPLACED

I've driven every type of vehicle that I can. I have experience with stock cars, Formula One, super cars, and Indy cars. I've driven mo...
END_OF_DOCUMENT_TOKEN_TO_BE_REPLACED

Traveling to Colombia soon? Excellent choice. You’ll not regret this one. But let me give you a little sneak peek of what Colombia is a...
END_OF_DOCUMENT_TOKEN_TO_BE_REPLACED

Fun, mysterious, and extremely beautiful, Cuba is a country that should be on the bucket list of every global traveler. The small islan...
END_OF_DOCUMENT_TOKEN_TO_BE_REPLACED

It’s hard to imagine that bustling Plano was once a small farming community. Now a vibrant city of family-fun and entertainment it's an...
END_OF_DOCUMENT_TOKEN_TO_BE_REPLACED

Are you about to embark on your first trip to Europe? There's so much to see and do that European travel is a life-long endeavor. Even ...
END_OF_DOCUMENT_TOKEN_TO_BE_REPLACED

The State Fair of Texas is held each fall at Dallas Fair Park. The Fair has taken place every year since 1886 and it usually begins the...
END_OF_DOCUMENT_TOKEN_TO_BE_REPLACED

5 thoughts on “Travel at Home: Neighbourhoods of Geneva”