Feast on a New Sleeping Beauty

Stephanie Meyer fans watch out; there are other undead in town and these ones have klout. Matthew Bourne’s Sleeping Beauty, which made its North Carolina debut at Belk Theater, is edgy, entertaining, visually stunning, and modern with a vampire twist. It has depth, drama, and a ton of smoking hot vampires. If that isn’t enough draw, it’s the classic story of Sleeping Beauty. Known and loved by all, there is no guess work with this ballet. I was able to sit back, relax, and soak up the eye-candy in Bourne’s reinvention of the classic Tchaikovsky ballet. 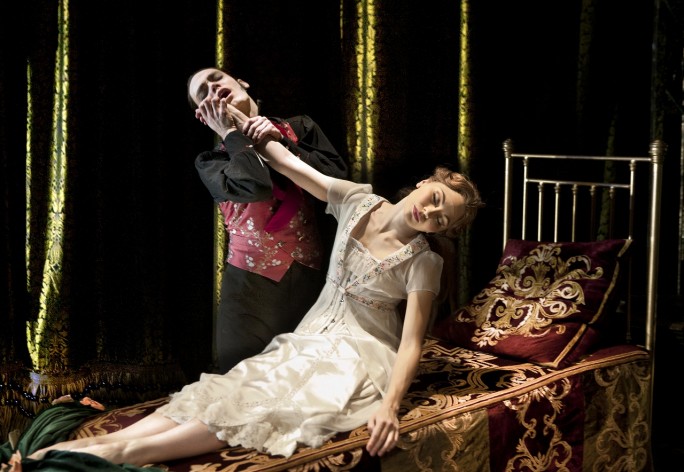 Bourne begins his version of Sleeping Beauty in 1890. At the heart of the tale is still a young princess named Aurora (Hannah Vassallo), the daughter of King Benedict (Chris Trenfield) and Queen Eleanor (Daisy May Kemp). At first unable to conceive, the king and queen were helped by the dark fairy Carabosse (Tom Jackson Greaves in drag).  When baby Aurora is christened amid fairy dancing and happiness, Carabosse is angered that she wasn’t invited and places a curse on the young princess. Jump ahead to 1911 and Carabosse is dead, but her son, Caradoc, lives on to carry out her plan. Princess Aurora is young and beautiful. While she has many noble suitors, she only has eyes for working man Leo, (Chris Trenfield) the royal gamekeeper. Before they can make their love official, she pricks her finger on Caradoc’s black rose and slips into a deep sleep. Luckily, Fairy King Count Lilac (Christopher Marney) bites Leo and turns him into a fairy vampire, allowing the now immortal Leo to camp out for 100 years until the princess is ready to awaken with his kiss. But they still have to deal with Caradoc and the welcomed twists unfold.

With clear characters and background, I enjoyed Bourne’s version of Sleeping Beauty better than Tchaikovsky’s or should I say Disney’s version?  In this version, Aurora doesn’t awake to her lost love only to end the plot there; instead, there is a surprising twist that extends the story line and my interests. By introducing the character of Caradoc, Bourne also inserts conflict that never previously existed.

The cast was full of unique characters. A red velvet vampire caught my eye near the end of the performance and the two, evil, long-haired minions grabbed my attention for more reasons than looking good without a shirt. Vassallo and Trenfield’s nimble bodies melted into each other and rose and fell with the pace of the music. Acutely attuned to every muscle in her body, Vassallo had a control of her movements that I’ve never experienced before. When she was “sleeping” and flung about the stage like a rag doll, I sat wide-eyed, awe-struck, and amazed. Her movements were fluid, defying the restrictions of bones and muscle. I envied the childlike freedom that she portrayed; she brought life to a sleeping beauty.

The century time frame allowed Bourne to utilize different eras of dance. The waltzes and the final contemporary scene, playing host to the above mentioned red velvet vampire, are particular favorites. I only wish the costumes were more revealing to allow a better view of the movements. Vassallo’s costumes, while visually stunning, creating a flowing vision, hid her legs and the precision of her movement.

The classic fairy-tales have captured my attention and the original versions hold a special place in my heart but Sleeping Beauty was always lacking substance. Bourne’s version fills in the blankets yet keeps enough of the original to remain legendary.

Our San Antonio bucket list was super easy to create. There are so many unique bucket list experiences that we keep going back for more...
END_OF_DOCUMENT_TOKEN_TO_BE_REPLACED

Did you know that Houston is America's fourth-largest city? I really had no idea until my recent visit. The loop that goes around the c...
END_OF_DOCUMENT_TOKEN_TO_BE_REPLACED

Last year, Athena spent her birthday at home with us. We couldn't have friends over to celebrate and we could only get her things that ...
END_OF_DOCUMENT_TOKEN_TO_BE_REPLACED

What cities are on your travel bucket list for 2021? When we think of travel, we think of climbing hills to watch the sunrise, cocktail...
END_OF_DOCUMENT_TOKEN_TO_BE_REPLACED

Grandscape will be one of the largest and most unique mixed-use real estate developments in the country upon completion. Located in the...
END_OF_DOCUMENT_TOKEN_TO_BE_REPLACED

I've driven every type of vehicle that I can. I have experience with stock cars, Formula One, super cars, and Indy cars. I've driven mo...
END_OF_DOCUMENT_TOKEN_TO_BE_REPLACED

Traveling to Colombia soon? Excellent choice. You’ll not regret this one. But let me give you a little sneak peek of what Colombia is a...
END_OF_DOCUMENT_TOKEN_TO_BE_REPLACED

Fun, mysterious, and extremely beautiful, Cuba is a country that should be on the bucket list of every global traveler. The small islan...
END_OF_DOCUMENT_TOKEN_TO_BE_REPLACED

It’s hard to imagine that bustling Plano was once a small farming community. Now a vibrant city of family-fun and entertainment it's an...
END_OF_DOCUMENT_TOKEN_TO_BE_REPLACED

Are you about to embark on your first trip to Europe? There's so much to see and do that European travel is a life-long endeavor. Even ...
END_OF_DOCUMENT_TOKEN_TO_BE_REPLACED

The State Fair of Texas is held each fall at Dallas Fair Park. The Fair has taken place every year since 1886 and it usually begins the...
END_OF_DOCUMENT_TOKEN_TO_BE_REPLACED