The Book of Mormon – Hilarious in a Bad Way

How could a show get away with people giving God the middle finger? Or sexually explicit baptisms? Or even more inappropriate… holy books being shoved into unmentionable parts? Then there’s female genital mutilation, dysentery, AIDS, and unspeakable acts done to babies and frogs. And in such a religious area as Charlotte nonetheless. Well, The Book of Mormon did it and did it well. The entire Belk Theater was teary-eyed from laughter during opening night in Charlotte. All of these blasphemies are set to song and dance in a performance that I will not soon forget. 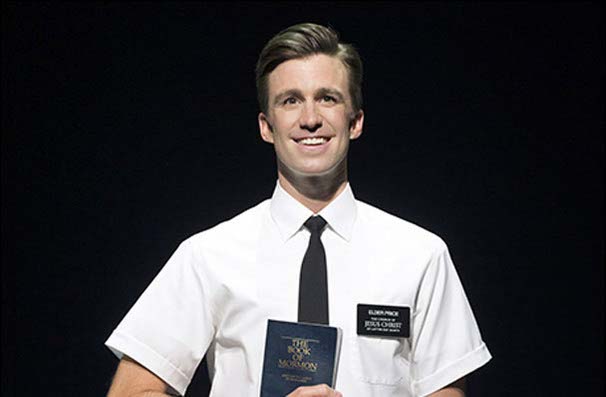 In an atypical plot, a pair of Salt Lake City missionaries, Elder Price (Mark Evans) and Cunningham (Christopher John O’Neill), are sent to Uganda to convert the AIDS and 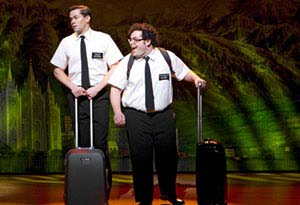 poverty plagued locals to Mormonism. The overachieving Elder Price wanted to be sent to Orlando and Cunningham just wanted to have a real friend and be accepted by others.  The missionaries, played with convincing fervor, are like fish out of holy water. Their faith is shaken by warlords, disease, and violence. They eventually fulfill their destiny with the help of cameos appearances by Jesus, Joseph Smith, Darth Vader, Hitler, and Johnny Cochran.

The highlight of the night was the Spooky Mormon Hell Dream where Elder Price finds himself dreaming that he’s in the midst of Hades’ flames with the likes of Adolf Hitler and Johnny Cochran. Not only did it lend itself to hysterical laughter, but the dancing incorporated detailed, distorted moves that were stunning to watch.  As the daemons moved in unison, I was mesmerized by their grace an fluidity, even if it was surrounded by the fiery flames of Hell. 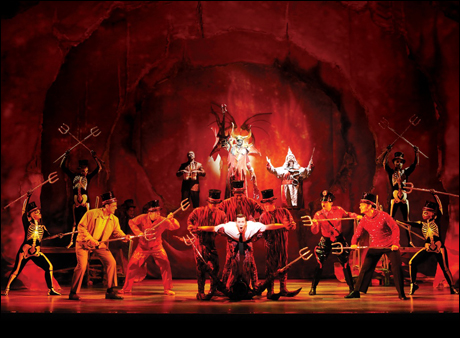 The tuneful songs were also one hit after another. Turn It Off was especially brilliant. As Elder McKinley leads the missionaries in “our nifty little Mormon trick” to suppress inconvenient feelings with no more effort than the flick of a light switch, I was shocked by the musical talent and the tap dancing number performed with ease. I can’t imagine the difficulty in performing such elaborate, physically demanding numbers while maintaining perfect pitch and tone. It takes immeasurable amounts of talent and skill. Another outstanding musical performance is by Samantha Marie Ware, playing the Ugandan Nabulungi. She brings tremendous musical firepower to Sal Tlay Ka Siti, her impossible dream of a civilized existence in the Mormons’ headquarters city, Salt Lake City. 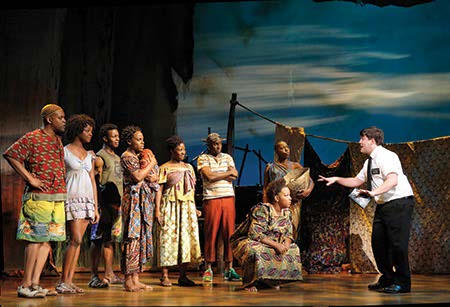 To sum up all of the inappropriateness was a grand finale Ugandan reenactment of Cunningham’s teaching including large, black strap-on props, a “stuffed” (in more ways than one) frog, and creative visuals of parts of the female anatomy on a man’s face. I was so shocked at the jaw-dropping actions that I scoured the theater for disapproving eyes. To my surprise, there wasn’t an unhappy, unsmiling face n the crowd. It was well-received and taken in fun.

The Book of Mormon was pee-in-my-pants funny, outrageous, and over-the-top shocking, which I expected, but what I didn’t expect was the superbly energetic dancing, award-winning, catchy tunes, and elaborate costumes and sets. It’s a hit; it’s proof that a whole lot of wrongs do actually make a right.

Our San Antonio bucket list was super easy to create. There are so many unique bucket list experiences that we keep going back for more...
END_OF_DOCUMENT_TOKEN_TO_BE_REPLACED

Did you know that Houston is America's fourth-largest city? I really had no idea until my recent visit. The loop that goes around the c...
END_OF_DOCUMENT_TOKEN_TO_BE_REPLACED

Last year, Athena spent her birthday at home with us. We couldn't have friends over to celebrate and we could only get her things that ...
END_OF_DOCUMENT_TOKEN_TO_BE_REPLACED

What cities are on your travel bucket list for 2021? When we think of travel, we think of climbing hills to watch the sunrise, cocktail...
END_OF_DOCUMENT_TOKEN_TO_BE_REPLACED

Grandscape will be one of the largest and most unique mixed-use real estate developments in the country upon completion. Located in the...
END_OF_DOCUMENT_TOKEN_TO_BE_REPLACED

I've driven every type of vehicle that I can. I have experience with stock cars, Formula One, super cars, and Indy cars. I've driven mo...
END_OF_DOCUMENT_TOKEN_TO_BE_REPLACED

Traveling to Colombia soon? Excellent choice. You’ll not regret this one. But let me give you a little sneak peek of what Colombia is a...
END_OF_DOCUMENT_TOKEN_TO_BE_REPLACED

Fun, mysterious, and extremely beautiful, Cuba is a country that should be on the bucket list of every global traveler. The small islan...
END_OF_DOCUMENT_TOKEN_TO_BE_REPLACED

It’s hard to imagine that bustling Plano was once a small farming community. Now a vibrant city of family-fun and entertainment it's an...
END_OF_DOCUMENT_TOKEN_TO_BE_REPLACED

Are you about to embark on your first trip to Europe? There's so much to see and do that European travel is a life-long endeavor. Even ...
END_OF_DOCUMENT_TOKEN_TO_BE_REPLACED

The State Fair of Texas is held each fall at Dallas Fair Park. The Fair has taken place every year since 1886 and it usually begins the...
END_OF_DOCUMENT_TOKEN_TO_BE_REPLACED