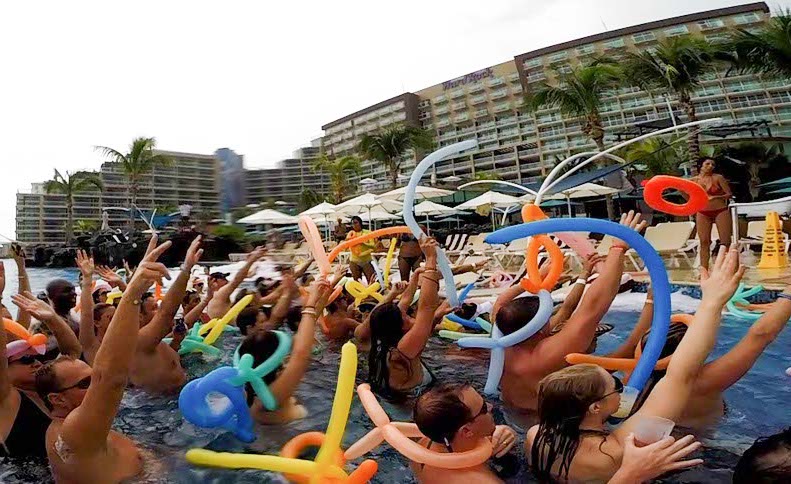 Once a week, Hard Rock Hotel Cancun has a bucketlist worthy Foam Party in the pool. With Athena on my shoulders, a balloon in my hand and foam all around, I partied like was 21 again. It was the most fun I had at an all-inclusive resort yet it’s a weekly event for Hard Rock Hotel Cancun. I thought I was too old and too family-focused to still party like a rock star but it’s possible to do both at Hard Rock. The party was scheduled for 1 pm. The rain started to pour down in buckets and I thought they might cancel the party, but I must have forgotten where I was or who I was partying with because the heavy rain was added fuel to party harder. There must have been 100 people in the massive pool when the foam started to blow out over the crowd. Athena, Darren and I were right in the middle of it.

The foam was so high that we needed to put Athena on our shoulders to see her. She didn’t stop smiling and couldn’t believe they were allowed to make such a mess with the bubbles. She kept telling me that we needed to do this in our bathtub. There was a live DJ and dancers to keep the party jumping. Rather than making us feel awkward about partying with a child, Athena was invited up on stage to dance with the performers. She soaked it up! She danced and laughed while everyone cheered. Some people wouldn’t consider putting their child up on stage to dance with women in their bikinis, but I was happy for her to see women celebrating their bodies and not embarrassed to dance and have fun. We took turns putting Athena on our shoulders because she wanted to stay for the entire party. Even when we were tired from carrying her, we found a way to make it work. She didn’t stop smiling the entire time.