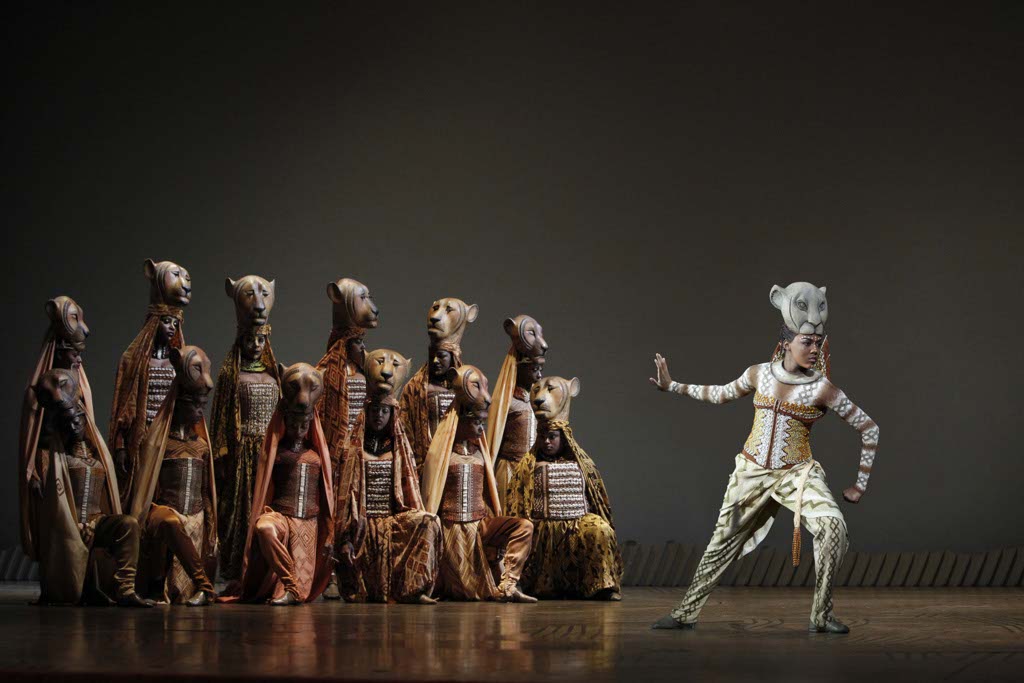 From the moment the performers entered the theater until they took their last bow, I was completely amazed and mesmerized. We all know The Lion King. We can sing along with the songs and most of us still get choked up when Mufasa dies, but The Lion King Musical is an amazing Disney production combined with the greatest, most creative, costumes, puppets and performers in musical theater. Last night, we attended the production at Segerstrom Center for the Arts and everything from the shadow puppets to the brilliantly designed costumes, from the performers to the songs, showed the brilliance of The Lion King Musical. Athena was nervous when we sat in our seats. There were drums and a dark red curtain that gave her an eerie feel. I thought she might want to leave or at best sit on my lap the entire production. I second guessed bringing her. I couldn’t have been more wrong.

It opened with Rafiki summoning all of the animals to Pride Rock, which triggered a massive procession of beautiful creatures including giraffes, leopards, birds, zebras, gazelles and our favorite – the elephant with its calf. At first, Athena had her head down but she caught the birds almost magically flying above us out of the corner of her eye and she couldn’t help but look up. When the graceful giraffes came on stage, she was mesmerized and when Rafiki lifted Simba up for the animals and the crowd to see, she stood and enthusiastically clapped. I didn’t have to prompt her. She was bursting with emotion. They had been performing for under 15 minutes, but it was already worth it. We, too, had a similar sense of awe that never left the entire night. I was impressed with the body movements of the performers. They were animalistic and graceful, but there were a few that performed so well I could only picture an animal and the person faded away. Watching the cheetah and the giraffes was magical. You can imagine yourself on the plains of Africa and it’s easy to become engulfed in the performances. Timon and Pumbaa were quite remarkable as well. Timon is a full-sized meerkat puppet who is operated by Nick Cordileone from behind. Pumbaa is an incredibly large warthog with actor Ben Lipitz encased in a part costume, part puppet creation. They cracked me up in the movie and they didn’t disappoint in the musical. Just looking at Pumbaa makes me laugh and Nick Cordileone was perfect for the part. It was Rafiki’s voice and stage presence that left me speechless. Who doesn’t love the old, crazy monkey, right? But Mukelisiwe Goba brought us to Africa.

The Lion King Musical includes audiences of all ages and backgrounds. It gives depth and shape to a production that we already love. I don’t know how I went all this time without seeing it, but experiencing it with Athena was far greater than anything I imagined. Watching her stand and cheer at the end of the show like she did at the beginning was a moment worth waiting for. Take your spouse; take your kids; take your parents; take your friends. Everyone will fall in love with the musical as much as we did.