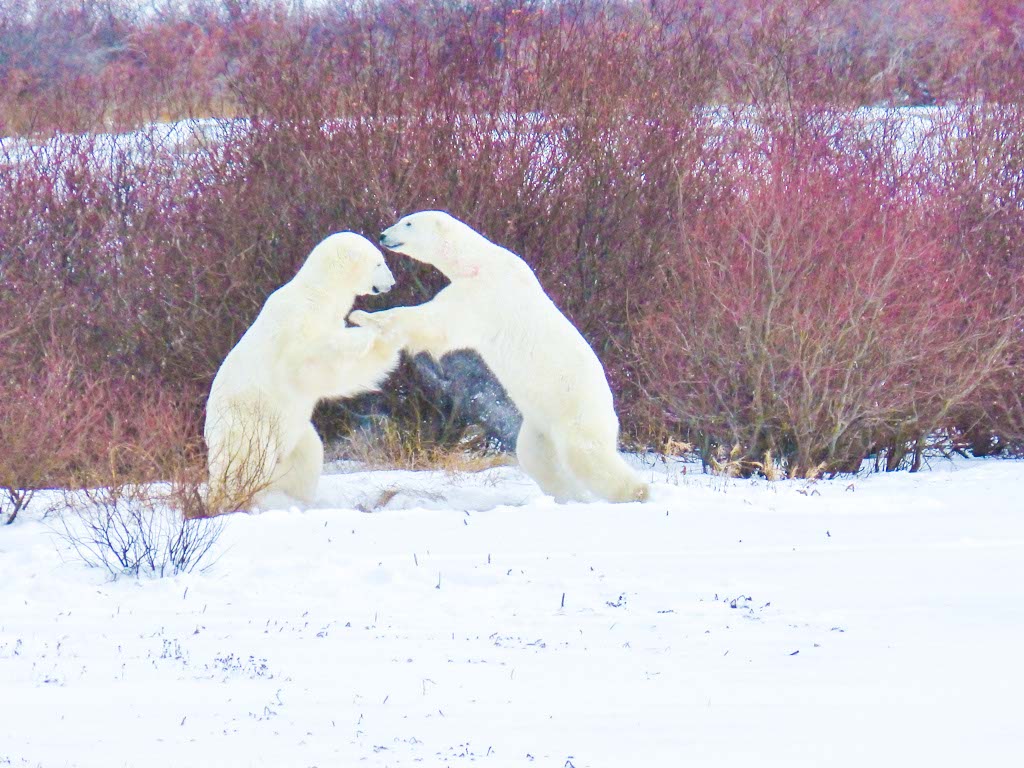 Called the polar bear capital of the world, Churchill, Manitoba is the prime destination to see polar bears in their natural environment. It is also known as one of the best places to experience the northern lights and enjoy dog sledding. I chose Churchill Nature Tours for the ultimate tundra bucketlist experience and below you can find all the details of my adventure. I arrived in Winnipeg via United Airlines and spent the night at the Hilton Suites Hotel (included in the Churchill Nature Tours package) near the airport. The hotel provided transportation and they arrived within 5 minutes of my call. Thuraya Weedon, owner and operator of Churchill Nature Tours, met the group at the hotel for a welcome dinner and orientation session. Our group consisted of 16 guests from around the globe and one tour guide. We were introduced to the guide, Patrick Rousseau (Pat), and given a brief introduction to his background. He ended up being one of the major highlights of the trip for me. We were like two peas in a pod and got along like long lost friends. He’s witty and well-traveled in Canada. He spent a few years of his life working in Cape Breton, Nova Scotia, my home, and he’s a true Canadian – friendly, thoughtful and a prankster. We happily sat next to each other for every meal and shared life stories.  I felt like I was back home in Cape Breton with friends.

My room at Hilton Suites Hotel had a king-sized bed, a large work desk, a sofa in the living room, complimentary high-speed wireless internet and a wet bar including mini-refrigerator, microwave and coffee maker. There was on-site dining, a pool, a fitness center and concierge desk. We were only there for an evening but it would be a great place to stay long term as well. The amenities and location make it a good stop in Winnipeg. We had an early morning flight to Churchill with Calm Air and everything went smoothly. When I stepped off the plane in Churchill, it was cold especially since I was coming from southern California. I was prepared with multiple layers and my LOWA winter boots but the below zero temperatures and brisk winds chilled me to the bone. Thankfully, Churchill Nature Tours have their own bus to transport guests and it was nice and warm when we stepped inside.

After a tour of the city, we went to Gypsy’s Bakery & Restaurant for lunch. This is where we had all of our meals and it was only a short drive, or walk, to our hotel, Aurora Inn. Gypsy’s was always packed with around 60 people but it was spectacular how well they managed the crowds. We never waited more than 15 minutes for our food and the service was personable. The owner remembered my name and the waitress knew my drink order after the first day. The breakfast was typical and the lunch was tasty, but they really shone at dinner. The fresh baked, homemade pastries and bread were delectable and the dinner choices were plentiful. There was a vegetarian and gluten-free guest and they never felt restricted at Gypsy’s. Some of my favorite dishes were the homemade soups, the chicken dinner and the vegetarian pasta.

The highlight of the day was the helicopter flight over Churchill. We had a 1 hour flight with Hudson Bay Helicopters and saw 24 polar bears from the air. By luck, I was with the Vice President and pilot at Hudson Bay Helicopters, Derek Longley. He has a vast knowledge of area and knew exactly where to take us to see the most number of bears. Everyone had a window seat and the windows opened for the best photo shots. Derek didn’t rush or worry about the time. It was easy to see his passion for flying and for the wildlife in Churchill and it was contagious. I was giddy with excitement every time I saw a new bear.

After dinner, there was an evening slideshow presentation at The Complex. This is the only experience during the trip that I could have gone without. The presenter was knowledgeable and the photos were beautiful but it was something I could have found online. It was a full day of excitement and I would have preferred to spend more time at dinner getting to know the other guests or other night activity. I was glad I didn’t skip it though because when it ended we went to see the northern lights. This was the best viewing night. Like a ballerina, the northern lights danced across the sky and moved gracefully with time. They appeared directly after the presentation and I would have missed them if I didn’t go.

We checked into Aurora Inn, which is where we stayed the entire time in Churchill. The Aurora Inn offers 18 spacious 2 story apartment style suites and it’s located in the heart of the city. Amenities included free WiFi, fully-equipped kitchens, complimentary laundry service and free access to the town complex gym and facilities. It was clean and functional and included everything I needed for my stay.

**Bears do wander into the city and they will hunt humans. It’s not advised to walk in the side streets, particularly after 10 pm and 5 am when the patrols end.** Day 3 was a full day in the tundra vehicle for polar bear watching. It was only a short drive from the city center and lunch was provided from Gypsy’s.

My favorite moment during the trip was my first bear sighting during the tundra vehicle excursion. We were driving in the rover and it started to snow, covering the ground with a beautiful white fluff that was picturesque. As I was watching the large white flakes flutter through the sky, I noticed a massive, male polar bears slowly moving through the dark bushes. He was majestic. I felt like I was watching a Coke commercial. He made his way down the street and he looked serious. His gigantic paws looked even larger with all of the fur that surrounded them. They made huge impressions in the snow and on me. He got closer and closer but the falling snow and the stark white background helped him blend in to his surroundings. Sometimes when I blinked, I had to wait for my eyes to adjust to see him again and that moment was my favorite moment of the trip. The realization of how great a predictor he is was overwhelming.  This almost 1000 pound beast can run at speeds of up to 25 mph yet they can easily blend in or hide in their surroundings. Wapusk Adventures is Canada’s largest sled dog kennel and a leader in this northern mushing community. This is where we spent most of day four. We were transported to the dog sledding camp based four miles from Churchill and greeted by 28 eager staff members, at least one of whom was human.

After an introduction to the dogs, including some of the most adorable puppies, we went inside a warm cabin to hear from Dave Daley and learn about dog sledding from an expert. He explained his dog philosophy and shared tales of arctic racing. I was surrounded by passionate people in Churchill and Dave was no exception.

We rode in custom-built sleds, and felt the fresh, cold Arctic air on this exhilarating ride along the trails. My only complaint was that it was too short. The dogs pulled us on a one mile trail ride through Churchill’s boreal forest, but it took less than ten minutes. There were two options in the sled – sitting or standing. I would have been happier with two rides so we could experience both options. I worried that the second full day in the polar rover might get boring since we already had a full day but it was anything but boring. Every day in the rover is a new adventure. On the second day, we saw some spectacular sparring between two male bears. It was interesting to watch the process. They were like two little kids. One bear was laying down in the snow resting. The other bear approached him and started nudging his neck. The two bears finally started pushing each other and throwing some punches. It was easy to see that they were not trying to hurt each other but their power was undeniable. When they wanted to stop, one bear simply laid down in the snow and the other backed off and laid close to him. I don’t know if they communicate with each other verbally but their body language is strong.

Two days in the tundra vehicles was plenty of time to get some up close photos and to take it in without the camera in hand. Although we were in the tundra vehicle and the viewing was fantastic from the windows, it was important to dress warm. On the open tundra, the winds were very strong.

We left Churchill after a few photo stops and returned to the Hilton Suites Hotel for a final dinner party. We had the afternoon in Winnipeg with the departure day beginning on day 7.

On departure day, breakfast and transfer to the airport were included. From the moment we arrived until the moment we returned to the airport, everything was looked after. The only additional costs were tips for the tundra vehicle drivers and our tour leader. From the hotels and dining to the experiences, interactions and tour leader, Churchill Nature Tours planned one of the best tours of my life. They thought of everything. Even the helicopter flight was booked for two different days just in case we didn’t get up on the first day. We always arrived at the restaurant a few minutes before the other groups so we never had to wait for our food and I already expressed my feelings for our tour leader, Pat. He was the most thoughtful, organized person I worked with in a long time. Somehow, the bus was always warm and we gained in-depth knowledge of the community and the wildlife. I went to Churchill to see the polar bears, but I got way more out of the trip than I expected. I’m already planning my next trip with Churchill Nature Tours.