I’ve been caving before and I’ve seen tons of unbelievable waterfalls in my life, but I’ve never gone caving to get to an underground waterfall before. I might not even have known they existed before seeing a photo of Ruby Falls in Chattanooga last year. The moment I saw it, I knew it needed to go on this year’s list. Ruby Falls is a breathtaking waterfall located over 1,120 feet below the surface of Lookout Mountain in Chattanooga, Tennessee. Today, Athena and I, along with two other families, descended 260 feet into historic Lookout Mountain by elevator. Then, our tour guide led us along the cave path where we discovered many unique geological wonders. Near the end of our journey, we heard the thundering roar of breathtaking Ruby Falls. 1120 feet underground, Ruby Falls is America’s tallest and deepest underground waterfall open to the public, and it’s as magical as it sounds. 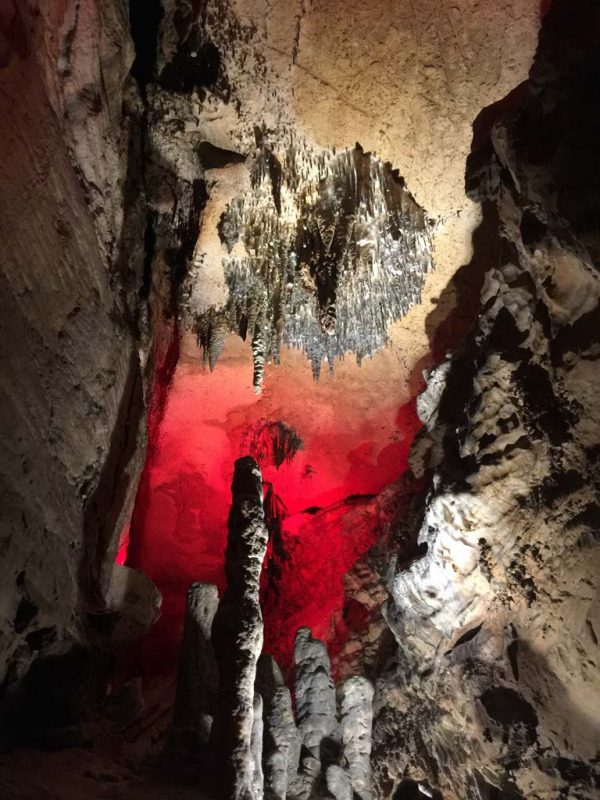 After an introduction to Lookout Mountain and Ruby Falls, we descended by elevator to the beginning of the cave hike. It was a pleasant surprise to walk the entire distance to the falls without needing to bend or crawl. Along the path, we discovered stalagmites and stalactites that formed many interesting shapes. The man-made lighting highlighted many of the shapes and created a magical world underground. I felt like I was at Superman’s Fortress of Solitude at times. 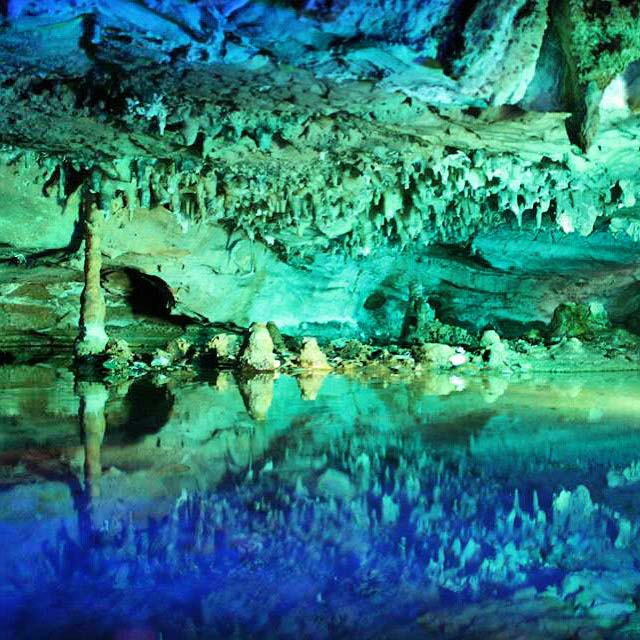 Some sections of the cave had crystal blue water along the sides of the path that created reflective pools. I knew that the main attraction was still to come but I couldn’t help stopping every few minutes to take a photo of all the beauty that surrounded me. It’s amazing how different every cave is. There is so much to discover underground. 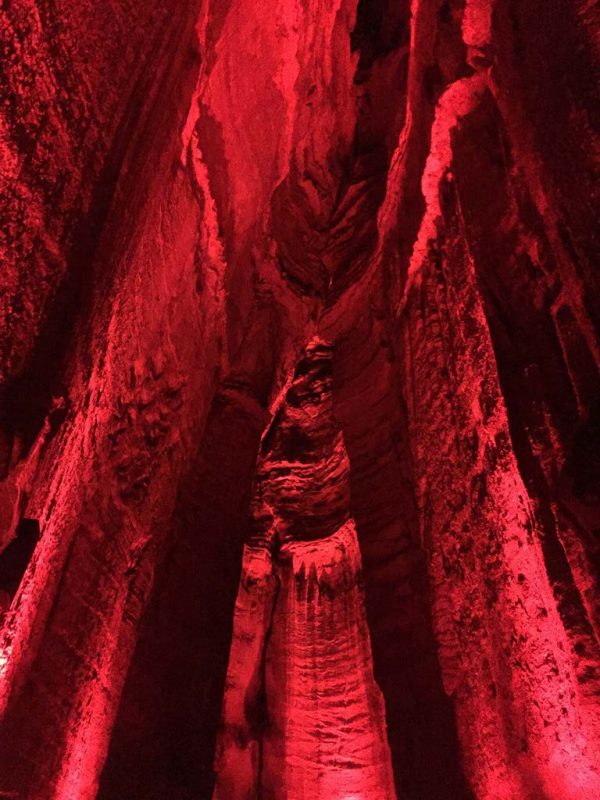 When we neared the falls, the cave opened up to the height of several story building. I could hear the power of the falls getting closer and closer. At first, it was dark. I could tell that the falls were close because of the sounds and the mist brushing my face but I couldn’t see anything. Then, the lights and music came on. 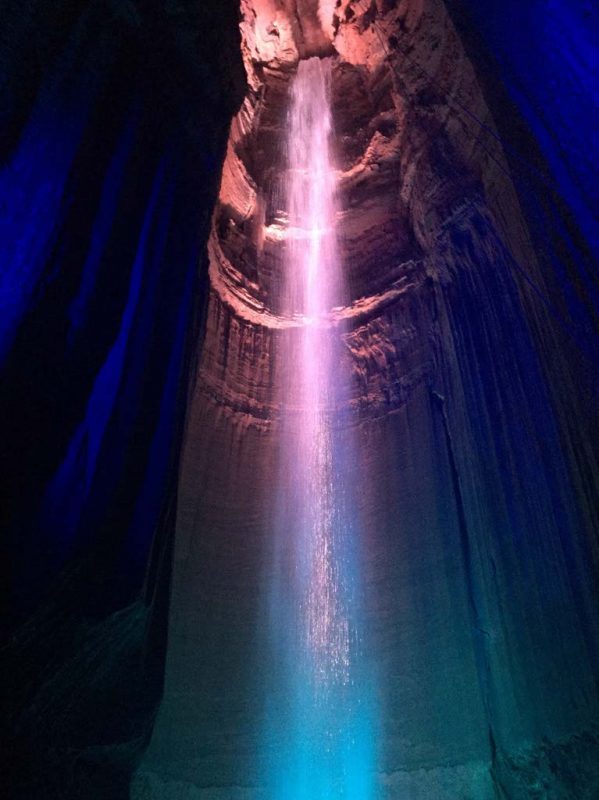 The lights changed from greens and blues to reds and oranges. With every shift in color, the falls took on a new life. Athena asked me if fairies were changing the color of the falls. I knew that it was just man-made lights but I still felt the magic. We were over 1000 feet underground yet we were witnessing a waterfall. 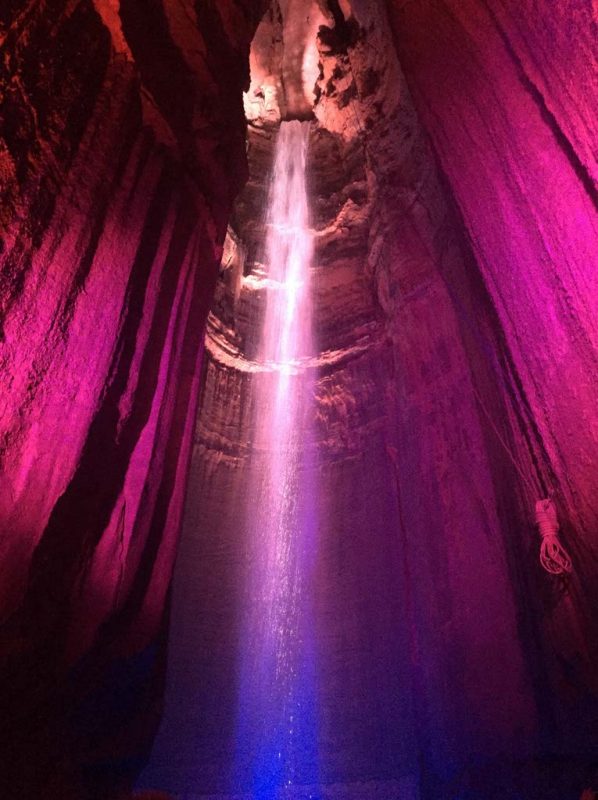 We returned by the same path that we entered but I was still living in the moment when I first watched the lights come on at the falls and the return to the surface was a blur. Luckily, I took tons of photos on the way into the falls so I didn’t miss out.

Seeing Ruby Falls in Chattanooga is one of those moments where you believe that a higher power must exist in the world. How is so much beauty possible? And to be hidden underground waiting to be discovered. What else is out there that we still don’t know exists?

Family friendly Chattanooga was packed with fun adventures, like visiting Ruby Falls, for all ages. It was a surprising destination to add to our bucket list but once we visited, we were hooked. We highly recommend discovering new adventures in the Chattanooga area. 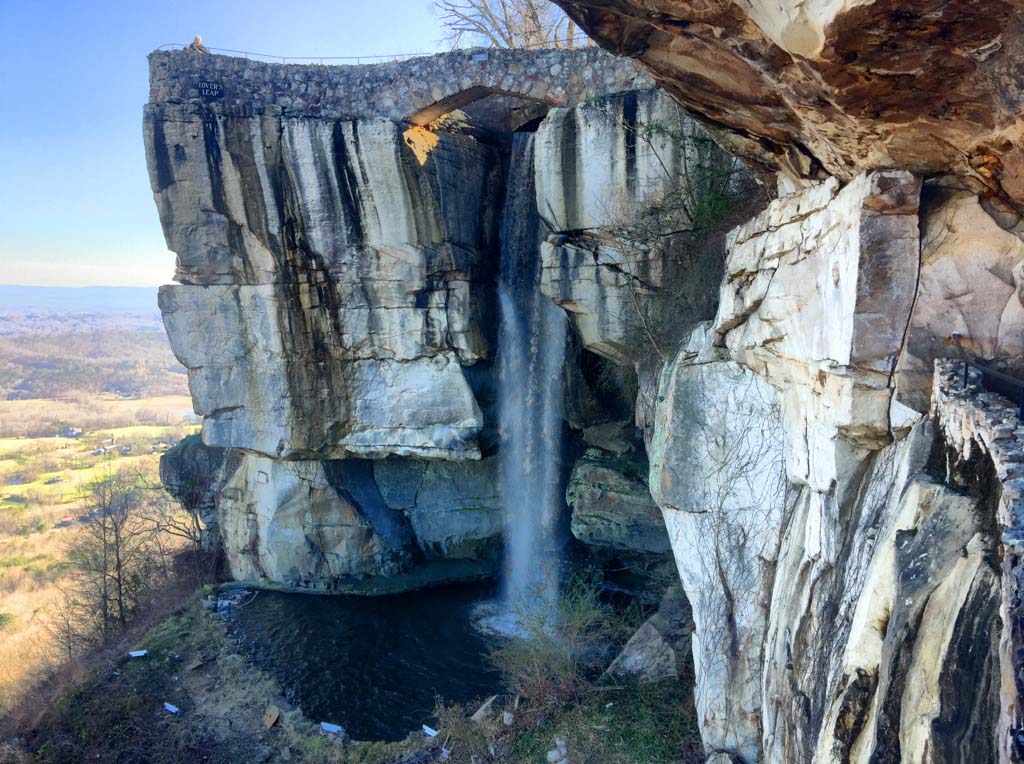 Tucked between the mountains of Southeast Tennessee, along the beautiful Tennessee River, Chattanooga is one of America’s most breathta...
END_OF_DOCUMENT_TOKEN_TO_BE_REPLACED