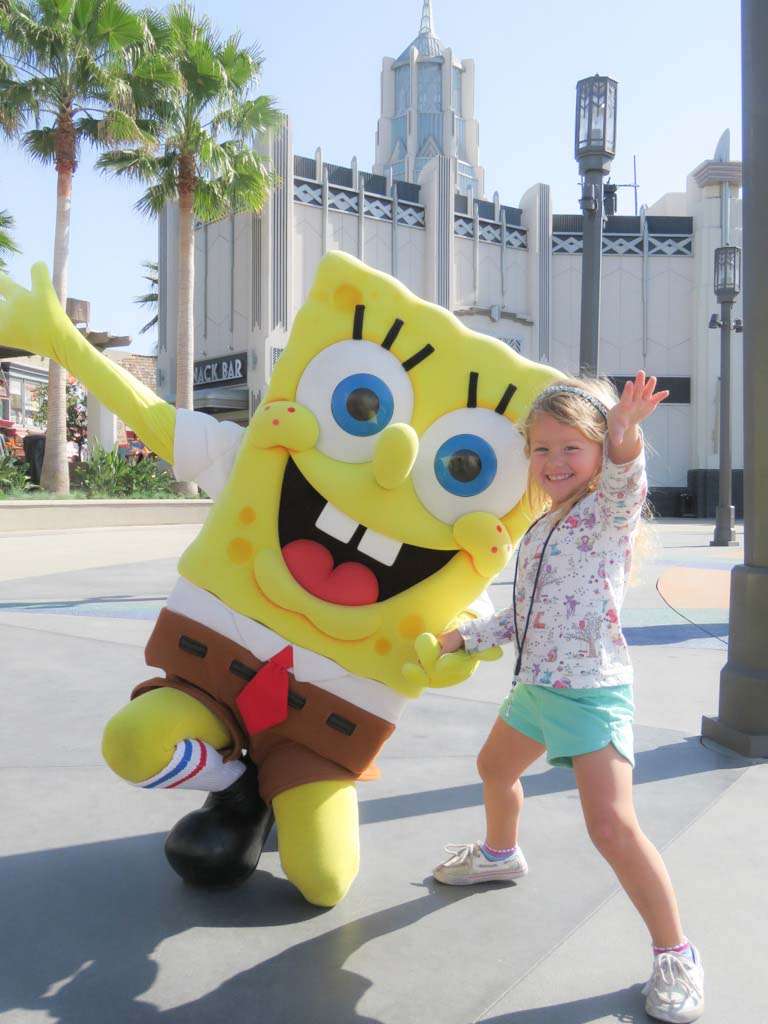 I’ve been to Universal Studios Hollywood a number of times before and I love the rides and shows. Fast & Furious, Revenge of the Mummy, and Transformers are my favorite rides and WaterWorld and the Studio Tour are my favorite experiences. None of them are possible for Athena at this age, though, so I wondered if it would be worth visiting Universal Studios Hollywood with kids.

Today, we tested out Universal Studios Hollywood with kids and it was equally fantastic. With Front of the Line tickets, we were able to fit it all in and with perfect California weather, we didn’t need to bring extra clothes. Athena met characters, watched shows, and rode rides from morning until night. Universal Studios Hollywood with Kids is just as epic as I’d hoped. As soon as we arrived, we made our way to Super Silly Fun Land. This colorfully themed, interactive outdoor venue is a literal interpretation of the seaside carnival from “Despicable Me”. It’s Athena’s favorite movie; she’s watched it dozens and dozens of times and can recite full scenes from her favorite moments.

We saw a Minion guarding the entrance and she ran to his side.

Could her smile get any bigger?

We knew great things were to come. Normally, I don’t let Athena play arcade games because they are impossible to win at her age but we couldn’t leave without trying the “Super Silly Space Killer” arcade game where Agnes won her lovable stuffed unicorn.

Like most arcade games, she didn’t win a prize, but it’s not always about winning. I pretended to shoot the martins with my ray gun as she made sounds like it was blowing up. Reenacting the movie was just as good as winning a prize and I didn’t need to carry something extra around all day. On the Silly Swirly Fun Ride, we soared and spun around for a 360-degree view of Super Silly Fun Land. Although it wasn’t a fast-paced, extreme ride, I was smiling as much as Athena. Her happiness and love of the rides is contagious. Adjacent to Super Silly Fun Land is Despicable Me Minion Mayhem. Athena had her picture taken with the girls and Gru and a Minion before entering the 3-D ride. We were grateful for the Front of the Line tickets at Despicable Me Minion Mayhem. It saved us almost an hour wait and we entered through a different door for better seats.

We started our adventure in Gru’s home, where we were recruited for his latest scheme – one where we were about to become a minion. After making it through Minion training, things didn’t go as planned.

Within moments, we were launched into an unforgettable trip through his super-villain laboratory.

After the ride, we enjoyed an interactive, Minion-inspired dance party. This was one of Athena’s favorite rides in the entire park and we returned two more times throughout the day. The characters from Despicable Me were Athena’s favorite, but she was still beaming with anticipation when she saw Dora the Explorer and Sponge Bob. The characters make regular appearances throughout the day so it’s easy to get a photo with each of them. Would you think I’m a Harry Potter fan?

I was teaching at the high school level when the books came out so I read them to connect with the students, but I secretly loved them. I couldn’t get enough.

We took some time to stop at Honeydukes to find the best selection of Harry Potter themed candies and treats, but we didn’t break long enough to eat a meal.

If you’re looking for the Ultimate Universal Studios Hollywood Food Guide, including the best stops in The Wizarding World of Harry Potter, I’d check out Oh My Omaha for the perfect list.

Surprisingly, Athena’s favorite moment of the day was at The Wizarding World of Harry Potter too.

The Flight of the Hippogriff roller coaster spiraled and dove around the pumpkin patch and swooped past Hagrid’s hut. It was Athena’s first “big girl” roller coaster and she screamed with delight. She wanted to keep going on that ride all day but the line was excessive so we limited it a one time experience. The Lower Lot at Universal Studios, which has most of my favorite rides, wasn’t as spectacular for Athena. She couldn’t go on Fast & Furious, Transformers, or Jurassic Park, but we did find the Dino Play playground where she played for almost an hour while I rested. She loves interacting with other children and it was the perfect spot to recharge before continuing on in the park. We finished off the day with Skrek 4-D. It features an original 3-D film starring the vocal talents of the movies’ original cast. After entering Lord Farquaad’s “dungeon”, we emerged into a 3-D theater where special effects and the miracle of OgreVision glasses brought the experience to life.

We saw, heard, and actually felt the action as moving seats, water, wind, mist and other special effects put us in the middle of this fairytale adventure. It was a great way to end the day after hours of walking and exploring the park. I thought Athena might be too young to enjoy Universal Studios but I was completely wrong. She interacted with many of her favorite characters, discovered her love for roller coasters, and rode every ride possible. Even after six hours at the park, she didn’t want to leave. It was a special day together where it wasn’t just fun for one of us. I may not have gone on all of my favorite rides but I had more fun than I ever had at Universal Studios and Athena is already planning our next visit.