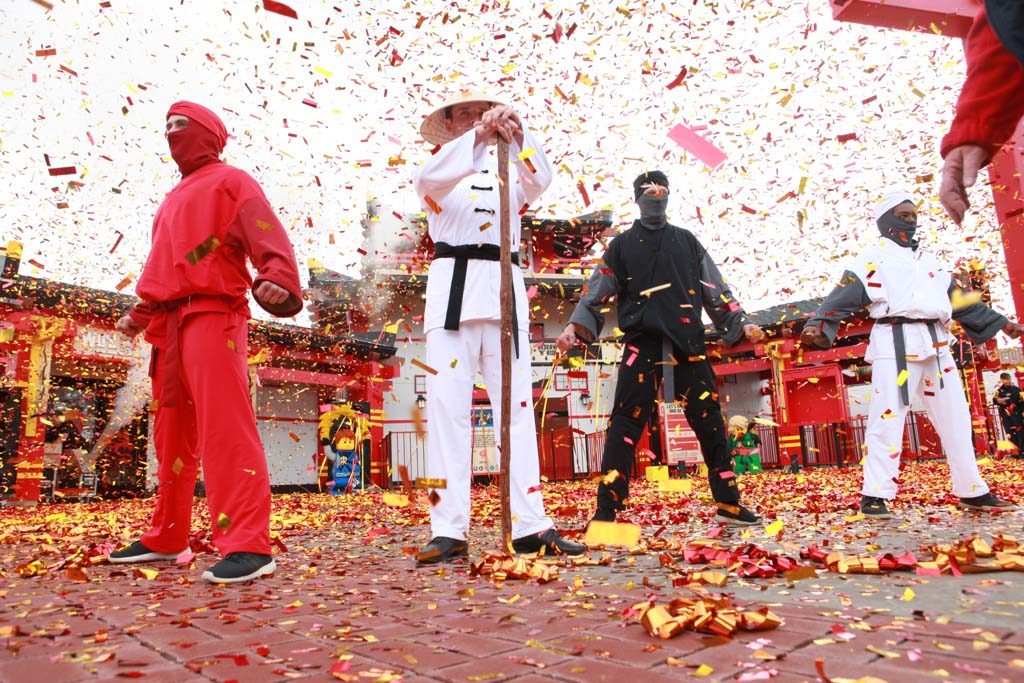 We were invited to a special press preview of LEGO NINJAGO World at Legoland California. The welcoming ceremony included Asian cuisine, special drumming performances, and plenty of time to experience NINJAGO The Ride. As one of the first to ride NINJAGO The Ride, we tested our ninja skills. Using technology never experienced at any other theme park in North America, we controlled the outcome of our adventure solely through the power of hand gestures. From 10 am – 1 pm, we had an all-access pass to NINJAGO World and we couldn’t get enough. The ceremony opened with a special performance by Tiko Drummers and “Sideswipe” Ninjas as seen on “America’s Got Talent”. They offered plenty of Asian cuisine choices and the ninjas and drummers hung around after the performance for photo opportunities. I thought Athena would be too scared to have her photo taken with the ninjas but she was the first in line. Dressed in her new NINJAGO bandana, she put up her fists and posed for the camera. Then, she showed off her ninja skills and I couldn’t help but smile at how social she is. I think she’d talk to anyone.

When it was time to try the NINJAGO ride for the first time, it was a little overwhelming for Athena. She started to cry as we made our way through the line. There was music playing and posters with scary dragons along the way. I thought we wouldn’t make it on the ride, but we pushed on and we were grateful.

She noticed a Lego character and I stopped for a photo as a distraction from the surroundings. She smiled and poses several different ways before we continued to the ride. Her demeanor completely changed after the pictures. She sat next to me on the ride and realized that she could throw ninja stars at bad characters through the use of hand gestures. Rather than putting her head down for the entire ride like I expected, she demonstrated her ninja skills and collected points that were displayed on a screen in front of us. She was totally into it. I think the interactive aspect distracted her from the scariness of the ride and made it an awesome experience. There are five new interactive attractions with NINJAGO The Ride being the main feature. The other four attractions are all designed to test guests’ creativity, agility, balance and speed, helping guests train to become a ninja. The new world also offers Asian inspired cuisine at NINJA Kitchen and shopping at Wu’s Warehouse. We rode NINJAGO The Ride three more times before making our way out of NINJAGO World. Each time, we increased our scores and had a more interactive experience. Athena’s favorite amusement park in California is Legoland and NINJAGO was her favorite ride. Legoland California keeps stepping it up a notch and we love being along for the ride.