In another life, I must have been a bird. I long to be in the sky, soaring over the mountains, the ocean, the trees, the world. Any opportunity I can get to have an unobstructed view from the sky, I take it. I revel in it. I cherish it. Last weekend, I went hot air ballooning in Temecula with California Dreamin Balloon Adventures and I soared over Temecula in a chariot in the sky. 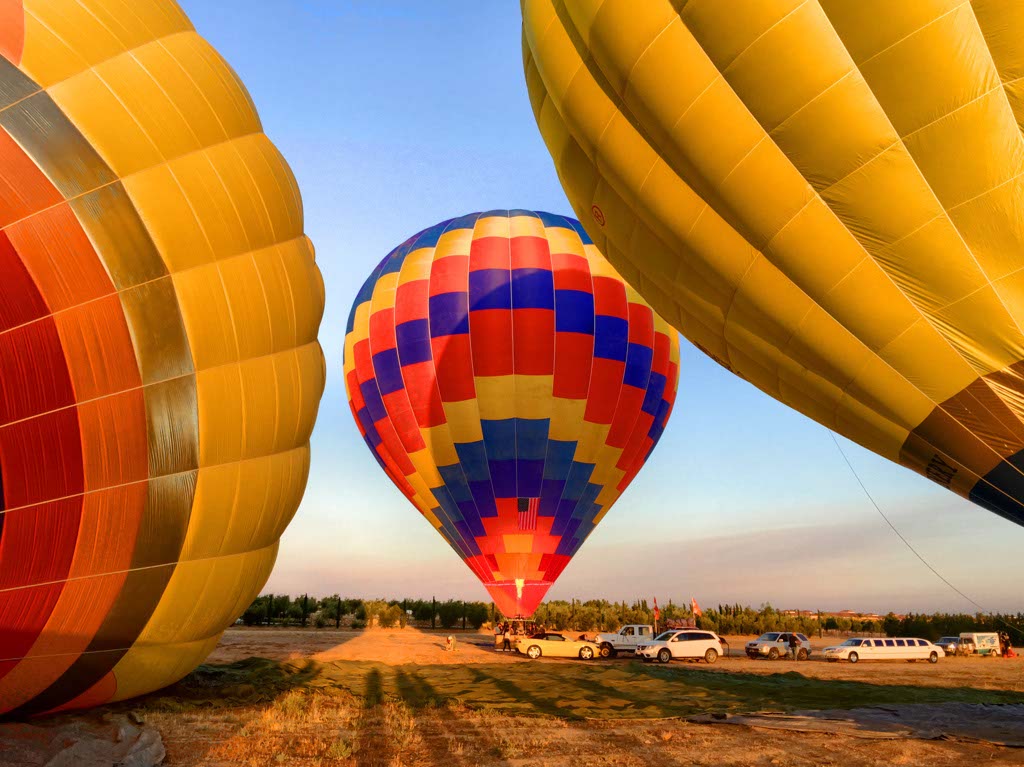 California Dreamin Balloon Adventures departs from Vindemia Winery in Temecula for their sunrise flights. We arrived and we were checked in and ready to go before the roosters started to wake the valley.

Our host greeted us at our car and showed us to the registration desk. The winery had a quit beauty that I welcomed at that hour.

We were driven to the launch site and we watched as the balloons came to life.

Once our balloon was filled, we crawled into the basket and lifted off. It was already hot but I was distracted by the surrounding beauty. 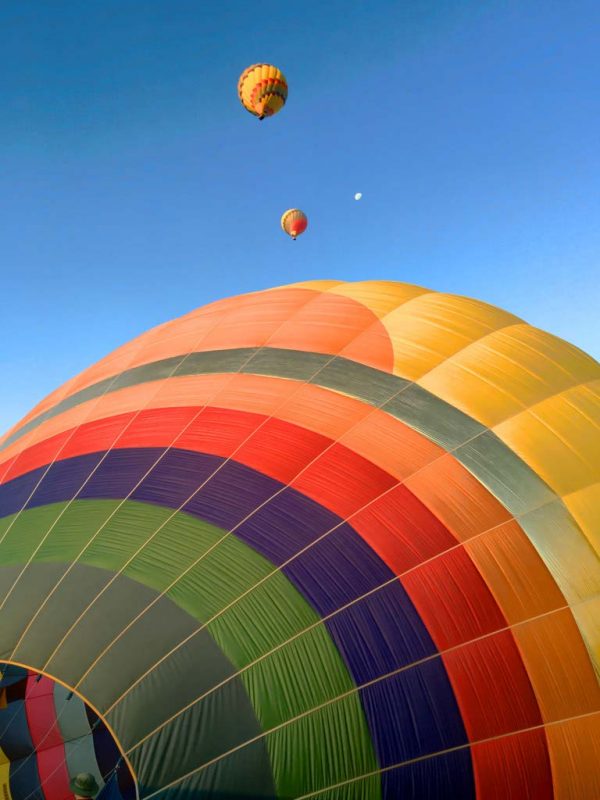 Many other balloons launch from the same spot, creating a mini balloon festival of colors in the sky. The panda-shaped balloon was my favorite, but the bright colors of the other balloons created a stark contract against the greens and browns of the wineries. 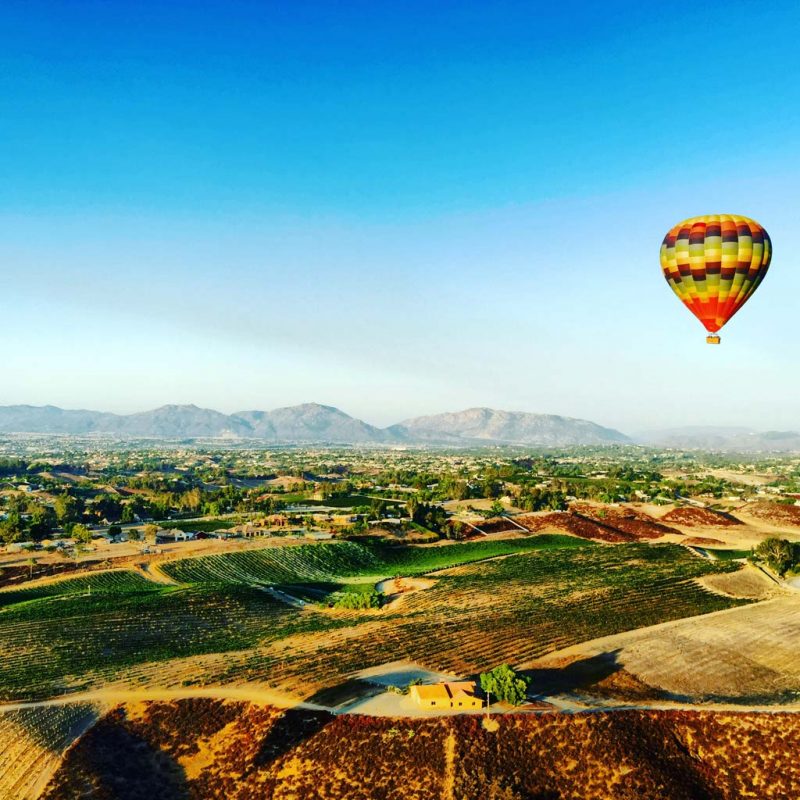 We rose and fell in the sky with the other balloons like two double Dutch ropes passing each other.

When we dipped down over a winery, I felt like I could reach out of the basket and touch the grapes. It made we want to discover Temecula wine country on foot, as well, so I could experience it from all directions.

I didn’t know the pilots had such control over the balloons. He could have landed on an egg without breaking it, or in this case, a grape. 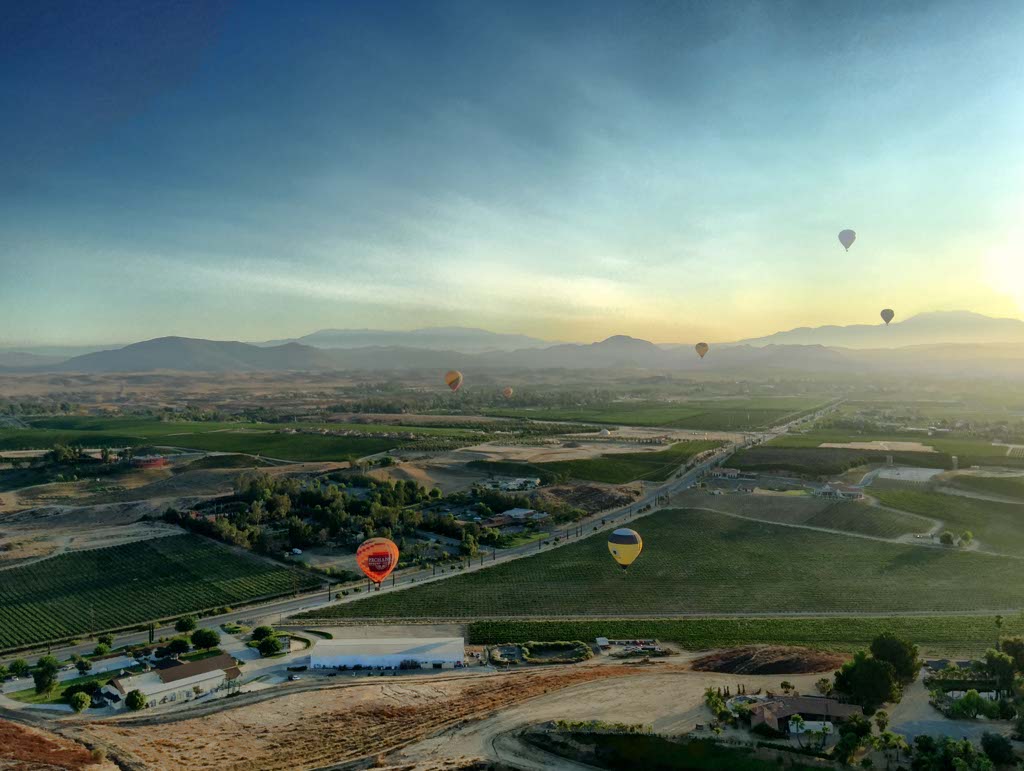 When the burner was silent, sounds were heightened. I could hear the wind and the other balloons. Although there were other people in the basket, they were silent too. We were soaking it in.

The temperatures proved to be too much for me and at one point, I had to sit in the basket to avoid a dizzy spell. The pilot was quick to respond and offered me a cold bottle of water. He asked if I wanted to land and have the van pick me up but I continued on. His quick reaction and access to water was the turning point. I was grateful that he was prepared and a little embarrassed that I wasn’t.

After an hour of catching the wind, we landed where we took off and we were driven back to Vindemia Winery for breakfast. We sat at a bistro-style table, sipped champagne, and ate fruit, cheese, and breads. I looked out over the winery and the valley and I was already planning my next California adventure bucket list experience.

According to a CNBC report, there is a new “sense of urgency” in travel after the COVID-19 pandemic. The survey of 12,000 travelers fro...
END_OF_DOCUMENT_TOKEN_TO_BE_REPLACED

Many people working in diverse industries usually partake in business travel since it’s essential for them to interact with colleagues,...
END_OF_DOCUMENT_TOKEN_TO_BE_REPLACED

Weekend getaways should be the easiest of all to pack for, right? After all, you know where you're going, what you'll be doing, and wha...
END_OF_DOCUMENT_TOKEN_TO_BE_REPLACED

On a recent Royal Caribbean cruise, I encountered countless parallels between game development and travel activities and professions. F...
END_OF_DOCUMENT_TOKEN_TO_BE_REPLACED

Recently, Saudi Arabia restored direct flights to Thailand after 32 years. Do you know the history behind the cold relationship between...
END_OF_DOCUMENT_TOKEN_TO_BE_REPLACED

The Palm Beaches are perfect for family travel. Whether you're interested in the beach as a natural playground or exploring the more wi...
END_OF_DOCUMENT_TOKEN_TO_BE_REPLACED

Flower tourism comes alive during the spring and summer. With so many different kinds of wild flora, it’s difficult to decide where bes...
END_OF_DOCUMENT_TOKEN_TO_BE_REPLACED

It’s easier than ever to take amazing photos of your travels so you always have those memories. Your phone is a high-quality camera, so...
END_OF_DOCUMENT_TOKEN_TO_BE_REPLACED

What cities are on your travel bucket list for 2021? When we think of travel, we think of climbing hills to watch the sunrise, cocktail...
END_OF_DOCUMENT_TOKEN_TO_BE_REPLACED

A digital nomad travels the world and works remotely. With the assistance of technology, nomads use the advancements and opportunities ...
END_OF_DOCUMENT_TOKEN_TO_BE_REPLACED

There are some trips where an extra large duffel bag is simply the best luggage option. You might be planning a mountain climbing exped...
END_OF_DOCUMENT_TOKEN_TO_BE_REPLACED

Fun, mysterious, and extremely beautiful, Cuba is a country that should be on the bucket list of every global traveler. The small islan...
END_OF_DOCUMENT_TOKEN_TO_BE_REPLACED