With a five year old that dresses like a Disney princess daily, it should come as no surprise that we love going to Disneyland. This summer, Disney is celebrating the summer of heroes with a new attractions, shows, character encounters, and food inspired by some of your favorite super heroes. We grabbed our super friends, and first-timers to Disneyland, and hit the parks for a day of hero fun but with princess style. 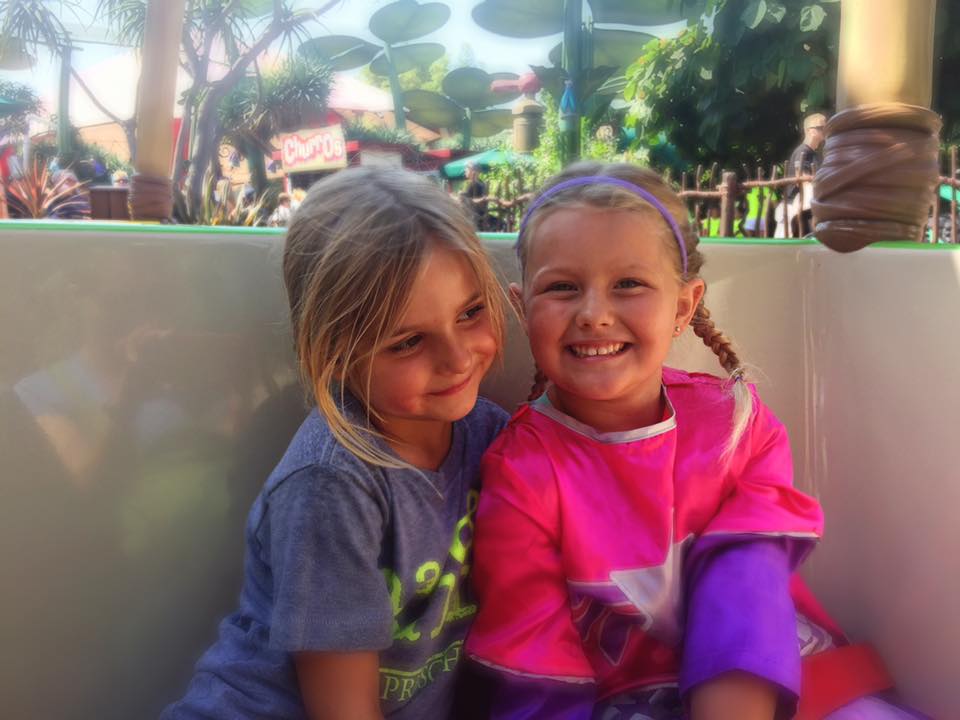 Athena and I are regulars at Disneyland but when we found out that our friends, June (Athena’s friend) and Amanda (June’s mom and my friend), hadn’t been to Disneyland yet, we were beaming with joy at the chance to show them the Disneyland we love.

Since Disneyland is celebrating a summer of heroes, Athena arrived at the park wearing her cape. We also had her mask packed in the bag in case she needed to get in disguise during the day. We were prepared, but our friends had another plan in mind. Since it was June’s first time to Disneyland, Amanda offered to take us to Bibbidi Bobbidi Boutique to find matching princess dresses for the girls. We might think of Black Widow or Captain America when we think of Super Heroes, but Athena and June think of Princess Elena of Avalor. 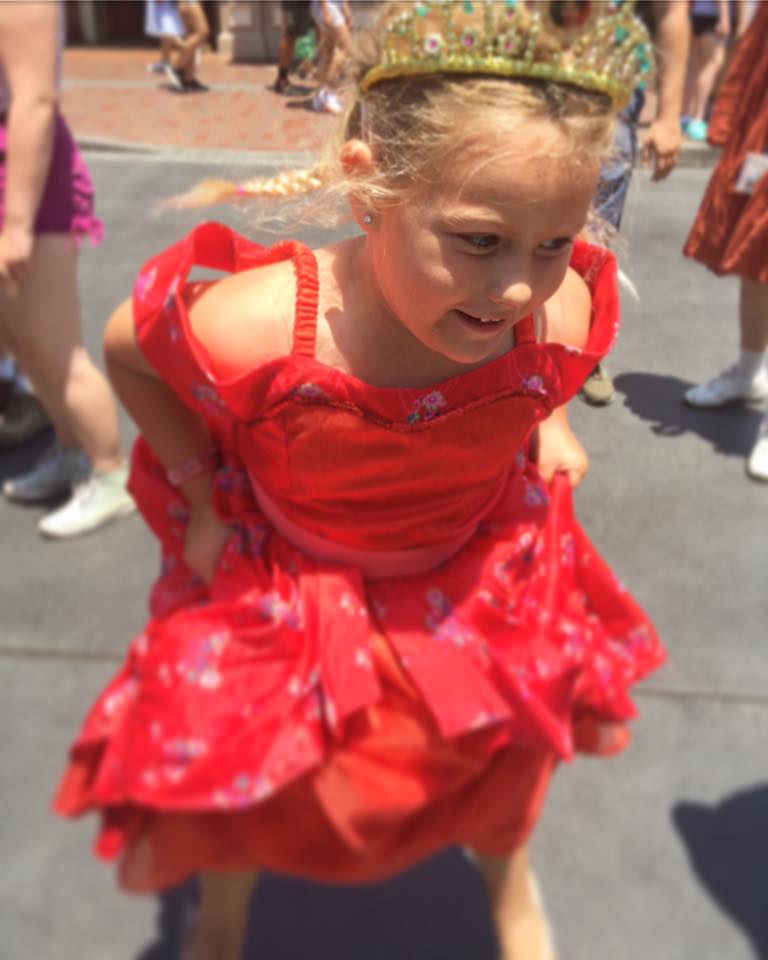 Once in their dresses, we were given a tip that Princess Elena could be found in a gazebo near Goofy’s Sky School at Disney California Adventure. Athena was literally dancing in the street on her way to see Princess Elena. (It helped that there was a parade in front of us and great music playing all the way to the gate. 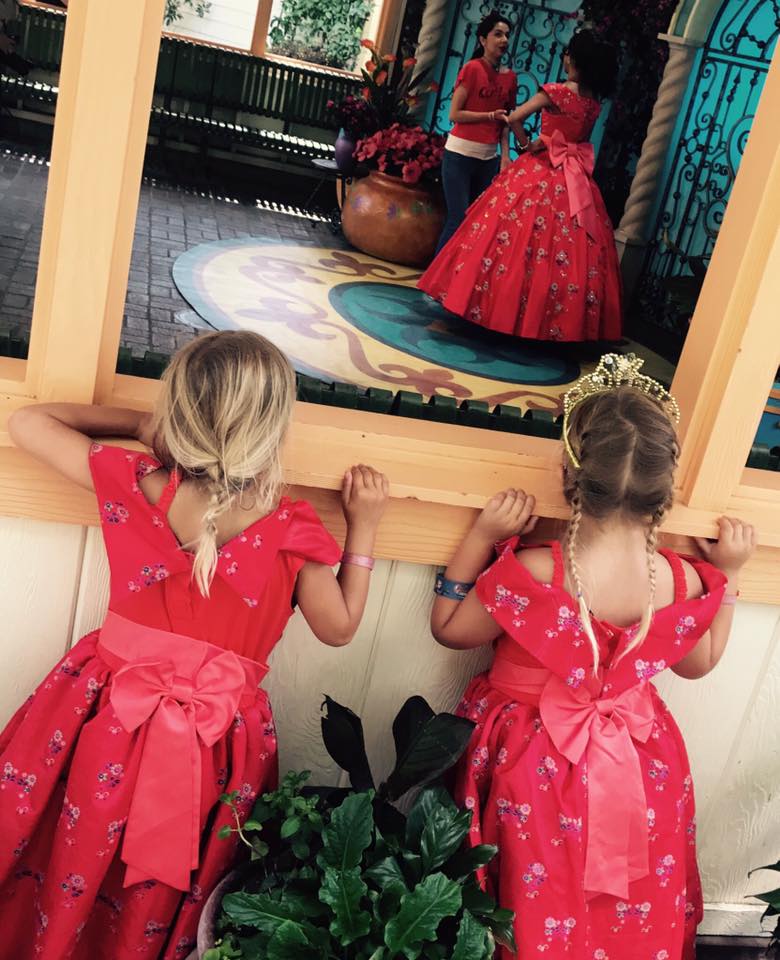 Both girls were so excited that they peered in the window of the gazebo to catch a glimpse of Princess Elena. When they saw her, they were overjoyed that she was wearing the same dress as them. It was the magical moment that you dream of having at Disneyland. 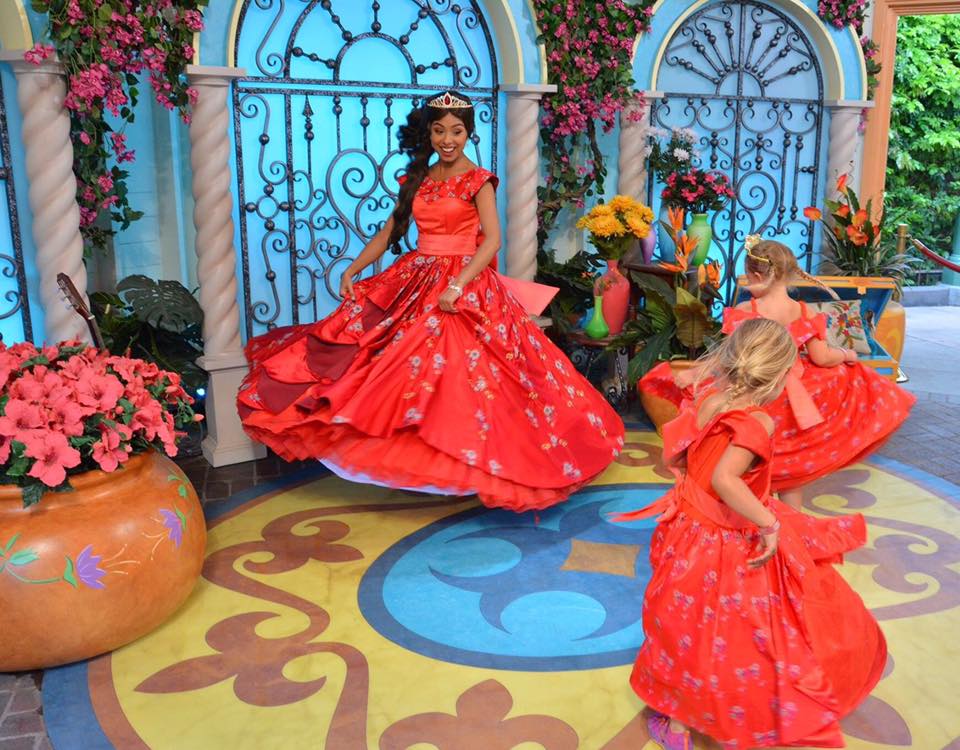 The dancing continued when the girls met Princess Elena and they were greeted in royal style. After a warm welcome and a delightful conversation about Avalor, the girls posed with Princess Elena. 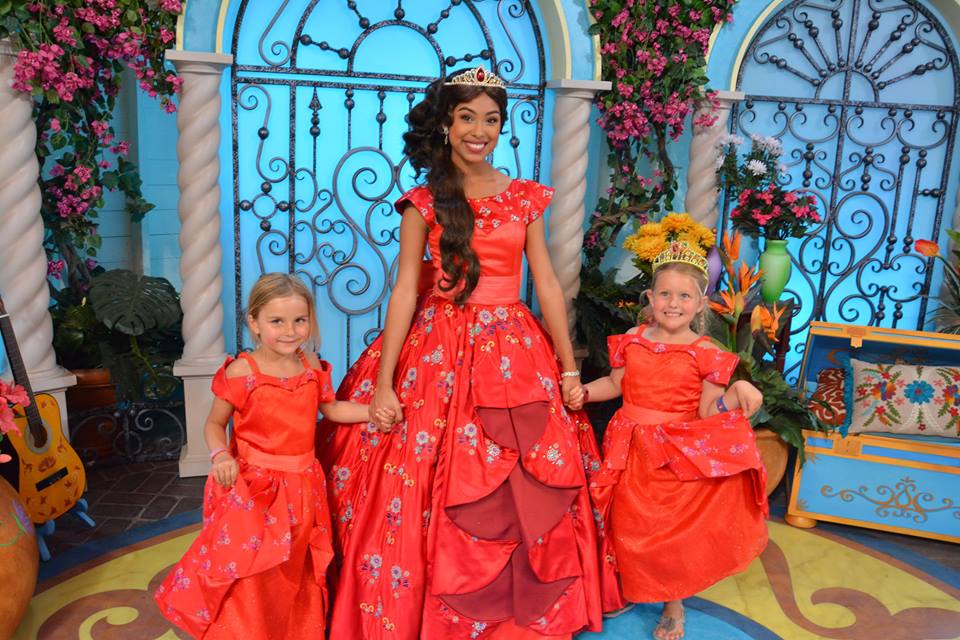 We would have felt completely fulfilled if we had drove home after meeting Princess Elena, but there was more to come. 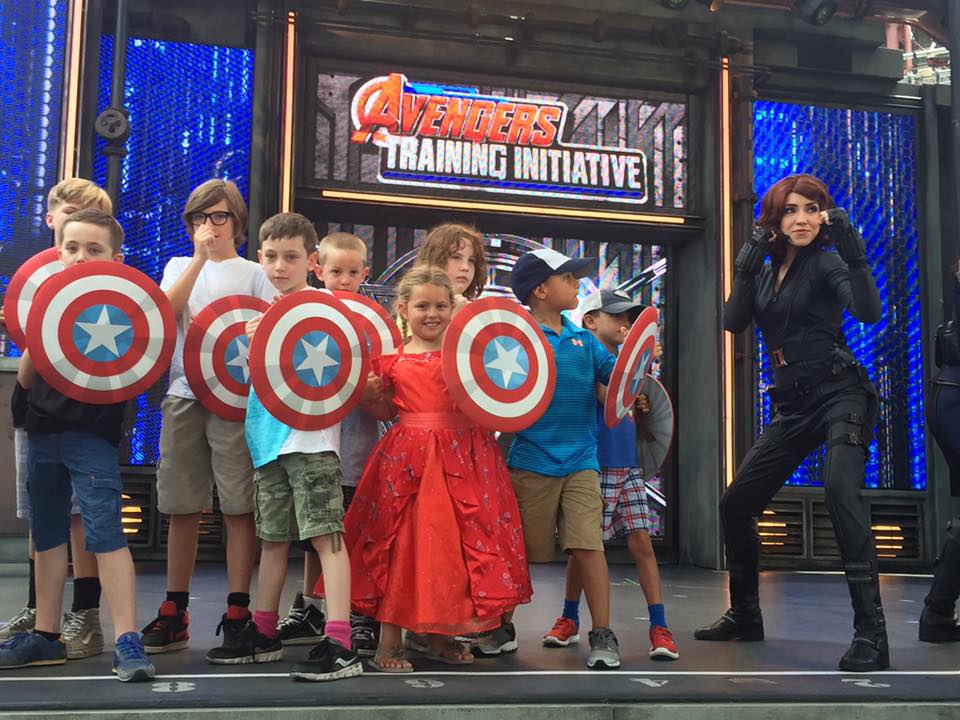 Next, Athena got to put her heroism to the test when she trained with Black Widow and Hawkeye during the Avenger Training Initiative. She faced off against the evil HYDRA organization and she did it like a true princess – in a dress. June cheered wildly for Athena from her seat and when the training ended, June told Athena that she was proud of her. They were so encouraging toward each other throughout the day that I was one proud mom. 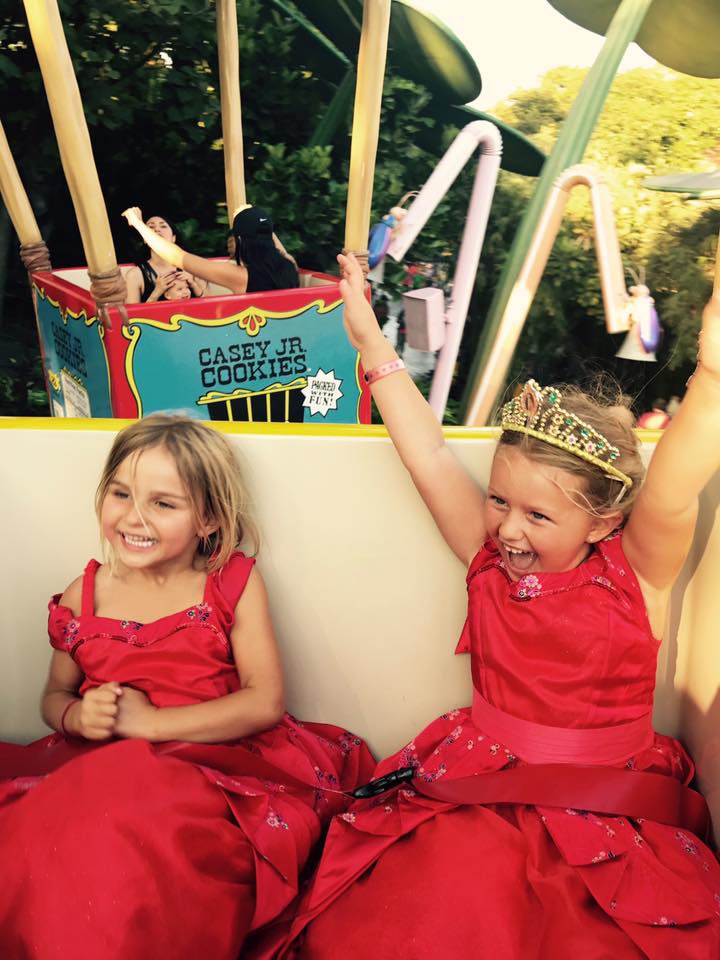 The day was about heroes and princesses but we found time for our favorite rides as well. Athena and June are still at the age where A Bug’s Land is whimsical and filled with wonder. They freely put their arms in the air on Flik’s Flyers and spun with delight on Francis’ Ladybug Boogie. 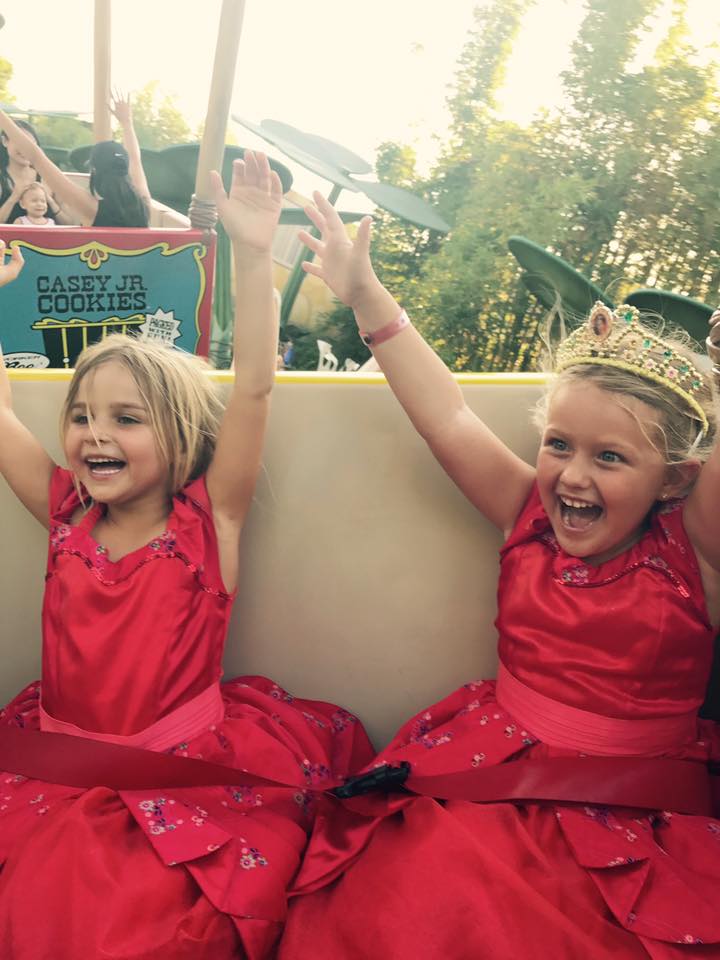 Action, style, wonder, and laughter filled our super hero day at Disneyland. I started out with a narrow-minded view of what makes a super hero but Athena and June reminded me of what it really takes to make a super hero and it involves a lot of princess style.

Traveling to the seven lands so grand, A journey to explore each strand, From the southern ice to the northern skies, Discovering cu...
END_OF_DOCUMENT_TOKEN_TO_BE_REPLACED

Traveling can be a hassle, especially when it comes to packing and carrying your luggage. A good carry-on bag can make a big difference...
END_OF_DOCUMENT_TOKEN_TO_BE_REPLACED

According to a CNBC report, there is a new “sense of urgency” in travel after the COVID-19 pandemic. The survey of 12,000 travelers fro...
END_OF_DOCUMENT_TOKEN_TO_BE_REPLACED

Many people working in diverse industries usually partake in business travel since it’s essential for them to interact with colleagues,...
END_OF_DOCUMENT_TOKEN_TO_BE_REPLACED

Weekend getaways should be the easiest of all to pack for, right? After all, you know where you're going, what you'll be doing, and wha...
END_OF_DOCUMENT_TOKEN_TO_BE_REPLACED

On a recent Royal Caribbean cruise, I encountered countless parallels between game development and travel activities and professions. F...
END_OF_DOCUMENT_TOKEN_TO_BE_REPLACED

Recently, Saudi Arabia restored direct flights to Thailand after 32 years. Do you know the history behind the cold relationship between...
END_OF_DOCUMENT_TOKEN_TO_BE_REPLACED 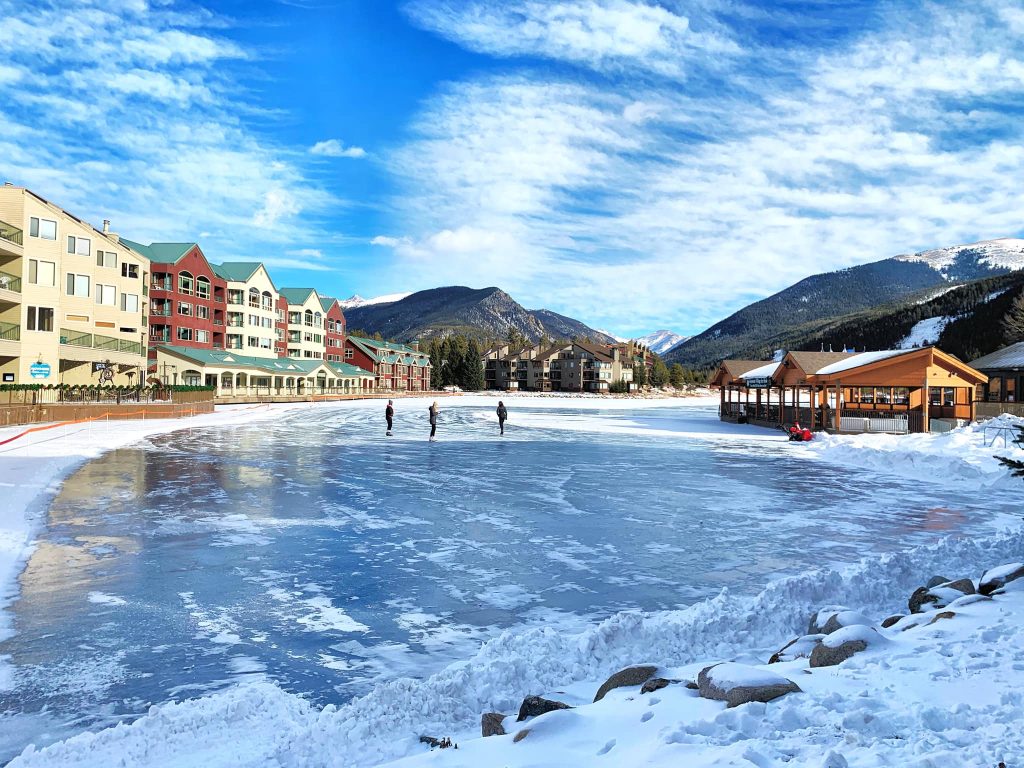 Looking for incredible winter vacations in the US? We’ve got you covered! From ski resorts to Christmas capitals, check out our USA win...
END_OF_DOCUMENT_TOKEN_TO_BE_REPLACED

The Palm Beaches are perfect for family travel. Whether you're interested in the beach as a natural playground or exploring the more wi...
END_OF_DOCUMENT_TOKEN_TO_BE_REPLACED

Flower tourism comes alive during the spring and summer. With so many different kinds of wild flora, it’s difficult to decide where bes...
END_OF_DOCUMENT_TOKEN_TO_BE_REPLACED

It’s easier than ever to take amazing photos of your travels so you always have those memories. Your phone is a high-quality camera, so...
END_OF_DOCUMENT_TOKEN_TO_BE_REPLACED

What cities are on your travel bucket list for 2021? When we think of travel, we think of climbing hills to watch the sunrise, cocktail...
END_OF_DOCUMENT_TOKEN_TO_BE_REPLACED