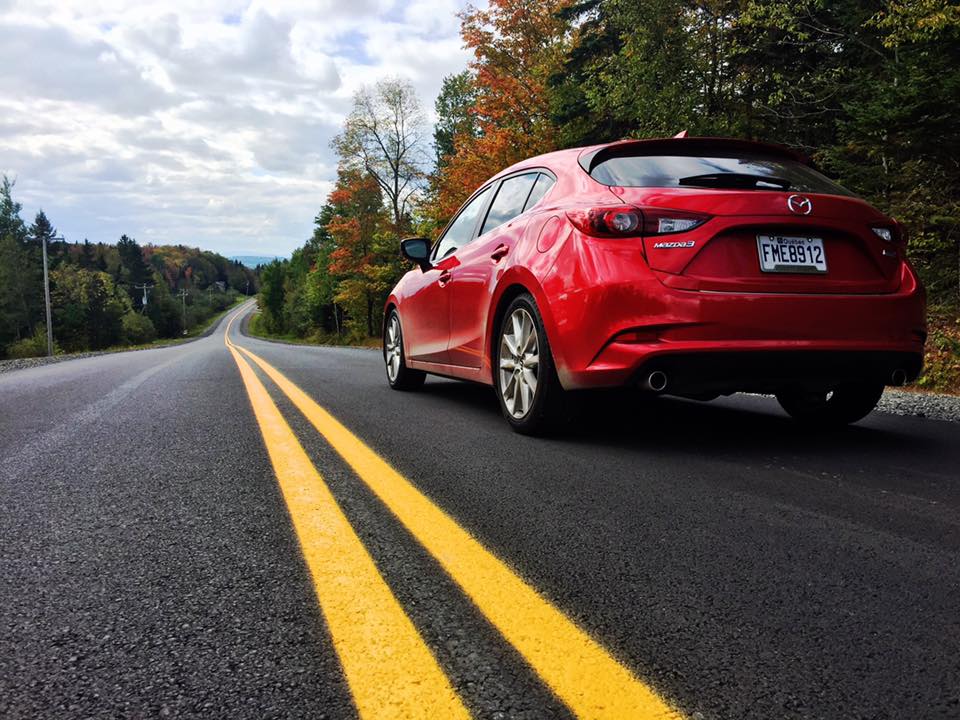 With the fall leaves already changing, a country road trip was on the top of our bucket list. The options for new adventures are bountiful since we only moved to Quebec a few months ago, but when Cord heard about Forest Lumina, a night-illuminated trail created for people of all ages, on the radio, a Coaticook road trip was on the horizon. We booked camping-like accommodations, planned a few activities like hiking and mini golf, and hit the road in our Mazda3. Forest Lumina was the main destination but the road trip was an equally fantastic part of the journey. We packed the trunk of the car with essentials like marshmallows and board games and added luxuries like sleeping bags, firewood, and clothes. For a short two-day trip like this, the truck space in the Mazda3 was plenty. I was shocked when the cooler fit perfectly without having to remove the trunk cover.  We wanted to be as comfortable as possible in the car since a major part of the adventure was watching the leaves and enjoying the ride. The Mont Expérience Hereford campground was tucked away in the trees and along a soothing river. We weren’t equipped for tenting so we chose a pod; it gave us all the fun of camping like a fire pit, BBQ, and rustic accommodations with none of the hassle of setting up a tent or bringing extra gear. Inside the pod was basic but exactly what we needed. Cord sleeps with a machine that requires electricity so we were grateful for the outlet next to the bed and Athena was excited to sleep on the pull-out bed. In the early morning hours, we really appreciated the fireplace because the temperatures dipped to single digits over night. Our plans were loose so we took a quiet walk along the river before returning back to the town center. We jumped across the rocks and played in the leaves. I felt cozy in my Bench sweater and welcomed the crisp air. The long sleeves covered my cold fingers and I pulled the hook over my head when the wind blew. It was Athena’s first time experiencing fall so I wanted to be out in nature as much as possible. The only time we were inside, other than sleeping, was to play a round of mini golf. GLO Golf Adventures has an 18-hole course played in the dark with black lights. Along the course, we wandered through whimsical landscapes, traveled under the sea, headed into space, and passed through the medieval era. Athena never tried mini-golf before so I quietly laughed as she learned to hold the club and swing at the ball. She looked like a hockey player, but we weren’t exactly keeping score or trying to be pro. Not far from GLO Golf Adventures is Parc de la Gorge, which is where Foresta Lumina happens at night. We were excited to hike around the park during the day and experience the contrast by returning at night. The Gorge Canyon Trail is 3.5 km and includes a suspended footbridge, an observation tower, a cave, and a river. Having a child is the perfect excuse to be a big kid again. We both jumped and played in the leaves at Parc de la Gorge and it reminded me of how much I missed fall and seasons in general while living in California. We built up an appetite after hiking so we found a restaurant that makes poutine. With so many local dairy farms and local products, I knew we’d get delicious, squeaky curds and home-made gravy.  Restaurant La Place hit the spot and we saved room for dessert at La Laiterie de Coaticook. Coaticook ice cream is well known in Quebec and La Laiterie de Coaticook is the place to get it. I ordered a scoop of double caramel and one with maple. I can honestly say it was the best ice cream I ever had in my life. I would consider driving two hours just to get it from the source again. Rather than a cake for my birthday this year, I want Coaticook ice cream. The main event during our Coaticook road trip followed La Laiterie de Coaticook. I expected Foresta Lumina to be beautiful but it was so far beyond my expectations that I’m at a loss for words. As we walked through the forest, we experienced a magical world of fairies, a universe of stars, and the chance to make music and light of our own. I was mesmerized by the beauty and the final section along the river made me feel like I was in outer space, surrounded by millions of stars (twinkling lights created by Parc de la Gorge). I would have flown half way around the world to take part in Forest Lumina but I only had to drive a couple hours. We headed back toward Montreal the next day, but our Coaticook road trip wasn’t over because the drive was an equally great part of the journey. Brightly colored trees lined the roads with the occasional farm or house to add contrast.

We’re embracing the seasons and planning more trips like our Coaticook road trip. I’m hoping for at least one trip a month to a new destination around Montreal.